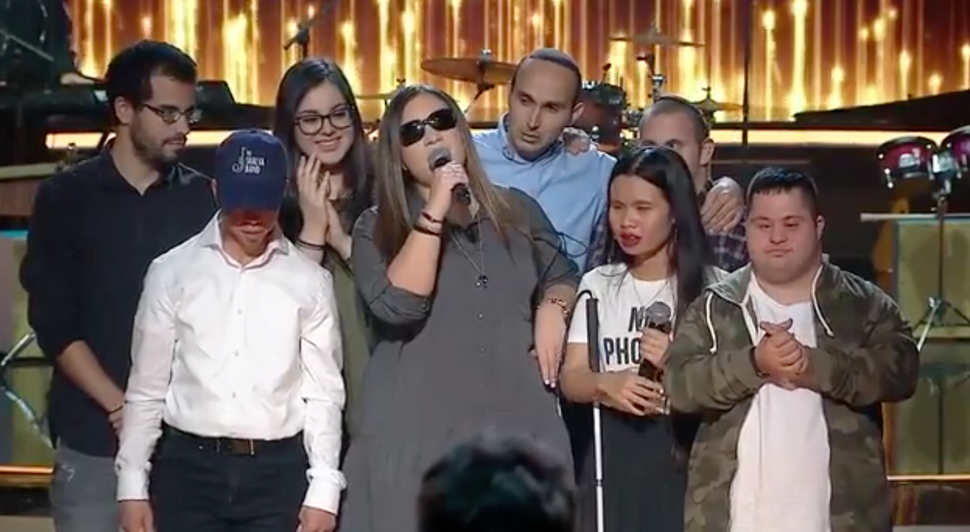 The Shalva Band on ‘The Next Star’ Image by Screenshot

Sun, sun, sun, here it comes: The Shalva Band is on the rise.

The eight musicians who perform on behalf of the Israeli Association for the Care and Inclusion of Persons with Disabilities performed in the Next Star contest on Saturday night were under considerable pressure. “Kochav Haba,” or “The Next Star,” an Israeli music competition similar to “The Voice” brings in hundreds of thousands of viewers. The contest winner goes on to represent Israel in the next Eurovision contest, which, in 2019, will be held in Israel.

The Shalva Band was up to the challenge. In an electric performance, the musicians delivered a flawless rendition of The Beatles’ “Here Comes The Sun,” for a stellar score of 91 percent from the judges, enough to advance into the next round of competition.

Shalva is a Jerusalem-based national center that provides care, education, vocational training, and community for people with disabilities. Its services are free, non-denominational, and inclusive of people of all religions. In 1990, Shalva began operation, caring for eight children out of an apartment as an after school program. Today it serves 2,000 people, including its house band of eight musicians.

The band’s triumphs continued beyond their planned performance. Before the end of the evening, a judge made a request of lead singer Anna-El. “There is a rumor, a little birdie told me, that you are amazing at singing “Toy”,” she smiled. “Can you give us a sample?”

“Toy” is the song that Netta Barzilai performed on Eurovision 2018, winning the competition for Israel and launching herself into stardom. Could the Shalva Band live up to the Netta standard?