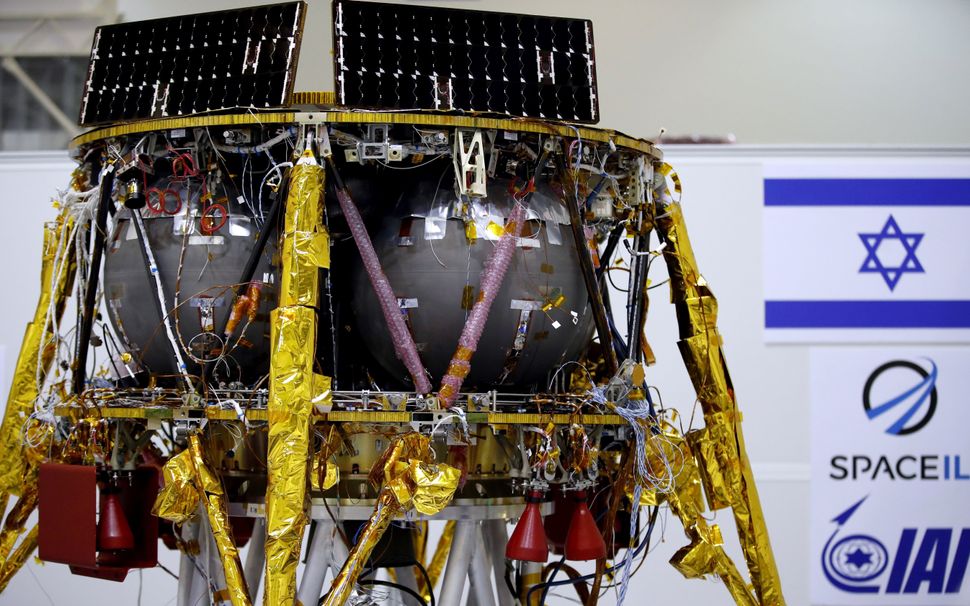 The Israeli space craft is set to launch on Thursday night. Image by Getty Images

In the beginning there was nothing, and darkness hung upon the face of the deep. In 2019, there will be many things: Books of science, technology, art, and literature, children’s artwork, the Declaration of Independence, a Torah, the testimony of a Holocaust survivor. And, courtesy of Israeli engineering and Jewish philanthropy, they’ll all be on the moon.

One small step for Israel, one giant step for… actually it’s a giant step, period.

Israel plans to launch a spacecraft — dubbed Beresheet, Genesis — to the moon in February. If it succeeds, it will be the first Israeli space mission ever. It will also make Israel only the fourth country to land a spacecraft on the moon.

True to Israeli culture’s fascination with tech and space-saving innovation — pun intended — the items and texts included in the spacecraft’s time capsule will be digitized on three discs that will hold hundreds of texts, including 27 dictionaries, each in a different language.

The mission, a collaboration between SpaceIL and the Israeli government’s space organization, is the product of a long dream: SpaceIL was launched in 2011 by three Israeli engineers as a response to the Google Lunar XPrize challenge, which called for non-governmental organizations to race to land on the moon. SpaceIL became a top five finalist, but the competition ended in March, 2018, without winners.

The engineers decided to forge forth nonetheless, with a partnership with the government and funding from major Jewish donors, including Morris Kahn, Miriam and Sheldon Adelson, Sami Sagol, Lynn Schusterman and more, the Times of Israel reports.

The craft will launch from Florida’s Cape Canaveral. If all goes according to plan it will orbit the earth three times, then orbit the moon two times, making a soft landing on the northern hemisphere of the moon after two or two-and-a-half months.