Jews Are Tweeting With The Hashtag #FirstAntiSemiticExperience, And It’s Horrifying 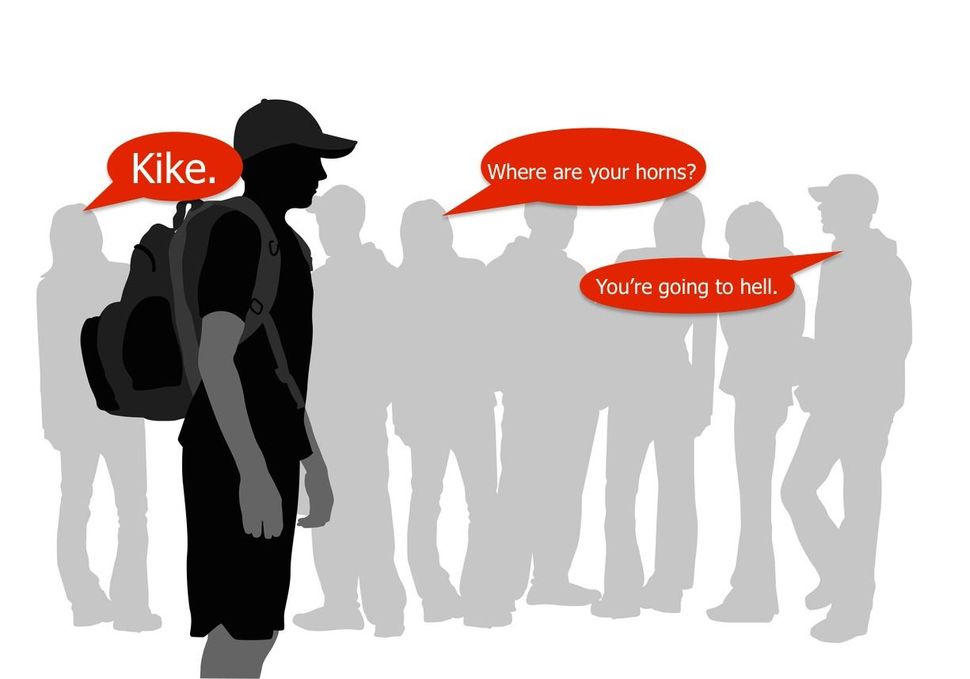 A penny to the head, a fist to the face, scanning for horns… when did it first happen to you?

A call from a British Rabbi for Jewish Twitter users to share their #FirstAntisemiticExperience has yielded a surge of painful memories on the social media site.

Rabbi Zvi Solomons serves the Jewish Community of Berkshire, an Orthodox community in the English town of Reading, barely half an hour train ride west of London. Responding to an historic high of anti-Semitic incidents in the UK — as well as to the very public accusations of anti-Semitism in the British Labour party, particularly from leader Jeremy Corbyn — Solomons asked Jews to share their earliest memories of enduring slurs and violence.

#FirstAntisemiticExperience – over to you. Please use the hashtag and tweet by replying to me here.

The hashtag has succeeded in demonstrating that the problem of anti-Semitism is “universal,” says Rabbi Solomons, noting that examples range from outright violence to subtle prejudice.

The answers are both painfully varied and painfully overlapping: many report experiencing violence, discrimination from teachers, slurs from childhood friends, Holocaust denial, approval of the Holocaust and taunts by Evangelical Christians. Of the growing hundreds of responses, the preponderance are from British Jews (helped by the fact that Solomon is British, working at a British congregation) with American, Canadian, and other European Jews chiming in. A surprising number mention violence. Many come from younger Jews.

Here is a small selection of the tweets.

My #FirstAntisemiticExperience was at age 13 being chased by a group of boys shouting “get the Jews” as me and a friend left our local youth club. Luckily, I only lived across the road and was a good runner. ?

My #FirstAntisemiticExperience was in high school. I was reading “Night” by Elie Wiesel and a boy told me that Wiesel made up the whole thing and that the Holocaust didn’t happen.

That same boy would go on to nominate me for treasurer of NHS because “Jews are good with money.” https://t.co/TXfovZuC60

My #FirstAntisemiticExperience was having pennies thrown at me in class, aged 8, followed by a swastika carved on my desk. A few days later I was beaten mercilessly by a gang of six boys who then dumped me in a rubbish bin to simulate putting me in an oven. https://t.co/hhWWO2h3k1

My first college roommate asked me where my horns were, on learning I was Jewish. Told him I file them down so they don’t poke through baseball caps – he spent the semester looking for where I kept my file. #FirstAntisemiticExperience

My #FirstAntisemiticExperience was when my parents chose to name me Vlad, a common name in my country of birth (USSR), b/c giving me a Jewish name would be to brand me w/ a scarlet letter that would subject me to discrimination & abuse throughout life. Im reminded of this daily.

#FirstAntisemiticExperience
Age 7 on a Sunday at an ice skating rink…pennies thrown, I didn’t even understand it til years later

My #FirstAntisemiticExperience was at 5ish in my parents’ car involved in a minor accident. The PC came over to my parents noting tat the other driver was called Cohen & beware he would try to do them on the insurance as he was a Yid. My parents kept quiet; Mum cried afterwards.

#FirstAntisemiticExperience
I was 3, walking on the neighbor’s lawn boundary. He came out to tell me if he caught a Jew again he’d shoot me.

The #FirstAntisemiticExperience that I remember was the kid who would sieg heil at me and call me “The Jew” in highschool. Non-stop Shoah “jokes” as well, ofc.

My #FirstAntisemiticExperience was in kindergarden when a few Christian kids used to love telling me that me, my family, and all the people I loved are going to hell for being Jewish.

My #FirstAntisemiticExperience was when a Russian immigrant classmate in the 7th grade accused my dad of having a “Jew nose”’and a “Jew car,” when the other kids were debating what country my dad was from.

My #FirstAntisemiticExperience was at age 13 being chased by a group of boys shouting “get the Jews” as me and a friend left our local youth club. Luckily, I only lived across the road and was a good runner. ?

My #FirstAntisemiticExperience was my 3rd grade teacher verbally attacking me for not having ash on my forehead on Ash Wednesday, and telling me it was the least I could do “since your people killed Jesus”. Not surprisingly, I was beaten at recess by several classmates after.

— Ray Goldfield Stands With The Jews Of The UK (@RayGoldfield) January 7, 2019

I was six. My best friend called me a “Jew bird” because she was cross with me, I told teacher. Headmaster called me a liar in front of my parents and I was punished for lying!! I was six, but that was the day I knew Jews were different. #FirstAntisemiticExperience

My #FirstAntisemiticExperience was being told at 8 years old that Jews are stingy & don’t belong here, but apparently I was one of the ‘good ones’. I was also called a Dirty Yid, had pennies thrown at my head, & mugged (because Jews have too much money).

Jews Are Tweeting With The Hashtag #FirstAntiSemiticExperience, And It’s Horrifying