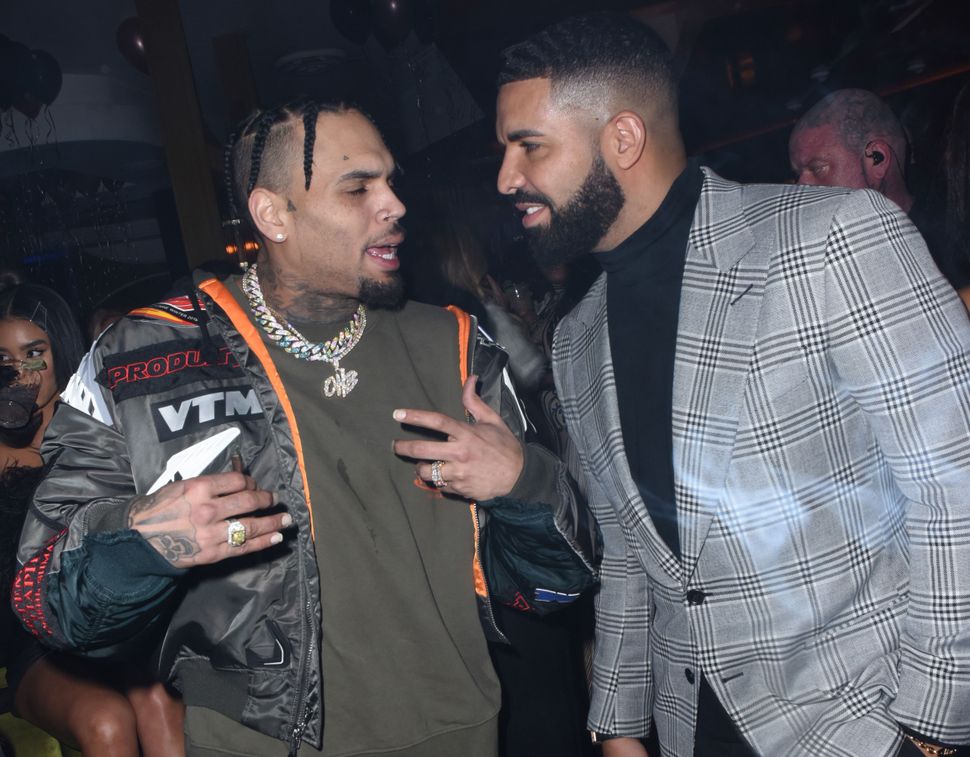 Drake is one of the most bankable artists alive. He was the most streamed musician of the year on Spotify. He is drowning in awards. He has his own record label, clothing line, and deals on deals, from a $19 million partnership with Apple to major money in whiskey and sports.

He seizes our hearts again and again, with nods to his mom, nostalgia for his 90’s childhood, Canadian pride, cheeky Jewish references, humor, tenderness, sex appeal, and rhymes. Nothing — not a full-frontal attack from rapper Kanye West or the revelation that he has harbored a secret child — has slowed Drake’s ascension to dominance.

But as the multi-hyphenate charmer declares allegiance to Chris Brown, who admitted to seriously battering then-girlfriend Rihanna and has been accused of domestic violence on multiple occasions, is it still okay to like Drake? Simultaneously, as old footage surfaces showing Drake kissing and fondling a 17-year-old girl when he was in his 20s, is Drake still kosher?

Chris Brown’s history of violence is well documented in police reports, witness reports, and his own words. Most famously, Brown has acknowledged that in May 2009, he beat his girlfriend Rihanna, punching and biting her until she was covered in bruises and bleeding from the mouth. Rihanna alleges that Brown threatened to kill her. Though Brown pleaded guilty at the time and was sentenced to community service and counseling for domestic violence, he later described in detail how he punched and bit her until she bled. On other occasions, Brown was served a restraining order from a later girlfriend, Karrueche Tran, who alleged that he beat her and tried to kill her. In May 2018, Brown was named in a lawsuit, in which a woman claimed she was raped at Brown’s home. Additionally, Brown has been accused by a handful of other people of assault and theft.

In fact, Brown was involved in a violent altercation with Drake in 2012. Neither was arrested, and the two seem to have reconciled — they partied together at Drake’s New Year bash, and Drake suggested on Instagram that the two are planning a collaboration. Drake has a long history of publicly lusting after Rihanna, announcing from the stage of the VMAs in 2016, “She’s someone I’ve been in love with since I was 22 years old, she’s one of my best friends in the world.” The two have collaborated musically many times.

Drake and young women and girls:

The question regarding Drake and Chris Brown is this — can you support an artist who has a friendship and perhaps collaboration with a known abuser? What if the victim of the abuse is OK with it?

The question regarding Drake and younger women is more complicated.

In resurfaced footage of a 2010 concert in Denver, Drake invites an audience member to the stage. He compliments her, they dance, he kisses her neck and then her mouth, as the audience cheers. He asked her age, and she said, “Seventeen,” to roars from the crowd. Drake shouted, “Awwww man I can’t go to jail! Seventeen?” adding, “I don’t know if I should feel guilty but I had fun.” Then he added, “I like the way your breasts feel against my chest,” and kisses her again. Notably, in Colorado, a 17-year old can consent to a person ten years older than her or less.

Nevertheless, in the light of the new documentary “Surviving R. Kelly” from Lifetime, which exposes the stories of many women who say they were raped or harassed by R. Kelly, some when they were underage, Drake’s actions are being treated with intense scrutiny.

Do a person’s friends define him? What about the people he chooses to work with? Does it matter if you kiss someone in a state where it’s legal, if you think what you’re doing might be illegal? Is it okay for a 32-year-old to have a close, personal friendship with a 14-year-old? Drake also has a close friendship with a man who was convicted and imprisoned for human trafficking and assault — does that matter?

The twisted personal and professional life of one the biggest stars in music, and its refractions through the mood of the day and the sensibilities of social media, make the very narrow bridge that is the world feel narrower than ever. There may never be moral clarity, or a kind of “God’s Plan” on this issue — on the plans we make ourselves.