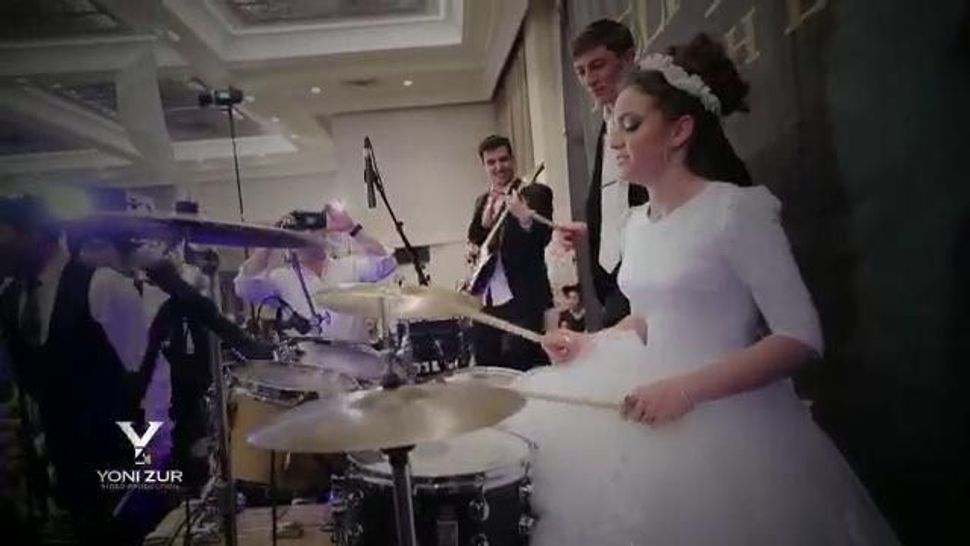 Bnei Brak bride playing the drums at her wedding. Image by Screenshot - YouTube

In the Haredi city of Bnei Brak, Israel, at the Ahuzat Wagshel wedding hall, one spunky Orthodox bride has caused a stir.

The newlywed, nineteen years old and high on the joy of her own wedding celebrations, approached the wedding band after the guests had left and only family members were left, Haredi news source B’Hadrei Haredim reports. With permission, she sat down and began to play — to a stunned crowd. The video of her drumming went viral, and the authorities — that is, Badatz, the kashruth supervision department of the Eda Haredit, which supervises the Bnei Brak wedding hall — were immediately notified.

According to B’Hadrei Haredim, the kashruth supervisors called the hall’s management, asking where the mashgiach [kashruth supervisor was] and “why they did not turn off the electricity in the hall as soon as the bride began to play.”

Badatz has since turned to the wedding band, “Yoeli Dickman’s Orchestra,” for an “explanation.” The band issued an apology and promised not to “assist a case that might harm the boundaries of modesty.” Ozer Druck, the band’s manager, told B’Hadrei Haredim’s women’s section: “Yoeli Dickman’s orchestra works out of a mission to make people happy on the day that matters most to them, above all an orchestra that listens to daas Torah [literally, “knowledge of Torah,” meaning, rabbinic authorities]. If things happened out of proportion, we apologize to all the parties.”

You can watch the bride’s elated performance here:

An extreme instance of religious fundamentalism gone wild? Or is this just another, umpteenth example of a concerning trend in the Orthodox community?

Even the publication that broke this story — and is making bank on rage-clicks from moderate Orthodox readers — adheres to these policies. At the footnote of the B’Haredi Haredim article, an editorial note explains why the video of the bride drumming is not included in the article: “It should be noted that despite the fact that the video has gone viral in the social networks, B’Hadrei Haredim has refrained from posting the video – in accordance with out policy not to include female photographs.”

The omission of women’s likenesses in publications. Controlling a bride at her own wedding. Unrelated? I don’t think so.

So, frum kallahs everywhere, please take note of the following new guidelines which we expect to soon be issued by the Badatz authorities:

And welcome to the happiest day of your life!