‘Broad City’ Had A Holocaust Survivor Get High At Drag Brunch 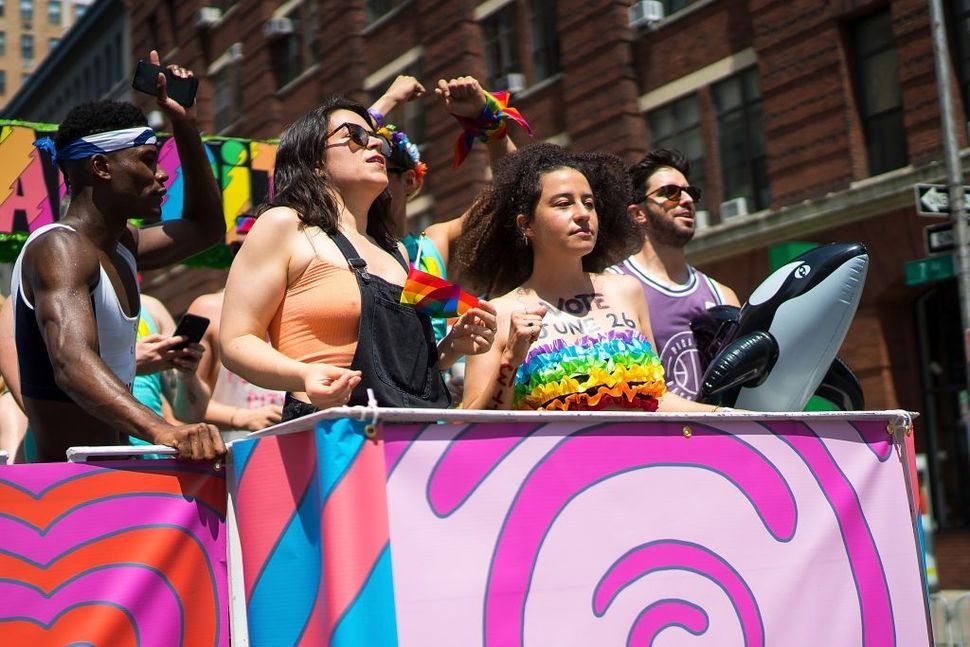 In the first season of “Broad City,” a Comedy Central series from Amy Poehler, we meet Abbi and Ilana, two ambition-lite New York millennials whose make occasional references to their cultural Judaism.

In the final season of “Broad City,” in the sixth episode “Lost & Found,” we get the following: discussions of Ashkenazi epigenetics, IBS, inherited trauma, Jewish-passing, the Holocaust, kippah clips, klezmer, and deviated septums.

Would you believe me if I said all these things come up in the first three minutes?

The episode begins when Ilana’s “Genes&Me” (23&Me) testing reveals that she has 100 percent Ashkenazi Jewish heritage. (“I coulda told you all that without your selling your medical history to the government,” Ilana’s mother (Susie Essman, perfection,) says. “Google owns your DNA now, you naive little bitch!”)

The DNA findings leads Ilana to connect with a 16th cousin, a Holocaust survivor whose story, she hopes, will give her enough firsthand information about the genetic inheritance of mental disorders to fill her admissions essay for NYU’s graduate psychology program.

“I know that I can learn so much about my history or whatever, but also about our shared mental illness — sh-wing!” Ilana says, thrusting her pelvis in triumph.

Springing 16th cousin Saul Borowitz (90-year-old actor Jerry Adler, of “The Sopranos”) from his care facility — and eventually losing him while high after vaping at a drag queen brunch — leads the best friends on a wild romp through New York City, from Zabar’s to New York’s Holocaust museum to a sale, ending with a prolonged homage to “Sex and the City.”

Even if you watch the 22-minute episode without vaping a “marijuana pen” first, it’s an insane mishmash of Jewish references. It’s thrillingly relatable, and also surface-level.

Some moments are hysterical, perfect send-ups of Jewish American culture. “Straight to the mayonnaise-based salads!” the girls yell, searching for Saul in Zabar’s. And the skewering of the disconnect between younger Jews and Holocaust survivors is painfully accurate. “I experience anxiety diarrhea three-to-eight times daily,” Ilana tells Saul, seconds into their meeting. “Now do you think that somatic expression tracks back to your horrific experience somehow, for sure?”

But the episode can’t seem to decide if the episode is a criticism of the exploitation Holocaust survivors and their narratives sometimes face, or if it’s a bagels ‘n Seinfeld-type celebration of Jewiness.

After the girls search all over the place in New York that a survivor might go — a sale, the Museum of Jewish Heritage: A Living Memorial To The Holocaust — they find him at Ikea, in Brooklyn. “After I escaped from the camp, I wound up in Sweden,” Saul tells them. “Those people — the Swedish people — were so good to me.” Spending time in Ikea, he says, is therapeutic. “You know my motto: Never forget! Also — don’t remind me.”

It’s funny and true, and unspeakably painful. That’s why it’s odd when the episode ends with Ilana concluding her NYU admissions essay, “I used to think being Jewish meant IBS and Tay-Sachs, inherited trauma, and childhood contact lessons. But now I know being Jewish is about being resilient.”

Not to sound like a bit-character in a “Broad City” scene, but this isn’t just darkly reductive, it’s also Ashkenormative as it gets. Is the real art of this episode the outcome of a Jewish millennial screaming on the Internet that “Broad City” erases the identities of Jews of color and that, besides, Zabar’s babka can’t hold a candle to Bread’s babka?

Or is the fact that these women can only name food, sales, and trauma as factors of the Jewish experience just a reflection of reality?

And how are any of us going to deal with our “Broad City”-induced Jewish anxiety diarrhea?

My grandma, who did not experience the Holocaust but rather was haunted by a constant need to reflect on it, might have called this episode “ungepatchka,” a Yiddish word that loosely means “hastily put together and all over the place.” Is it incisive criticism of post-Holocaust Jewish culture, or just a laundry list of Jewish motifs? A love letter to contemporary Ashkenazi Jewry, or just an opportunity to tangle with that darkest-of-dark comedy backdrops, the Holocaust?

Let’s hope we find out before the season ends — that anxiety diarrhea is no joke.

‘Broad City’ Had A Holocaust Survivor Get High At Drag Brunch