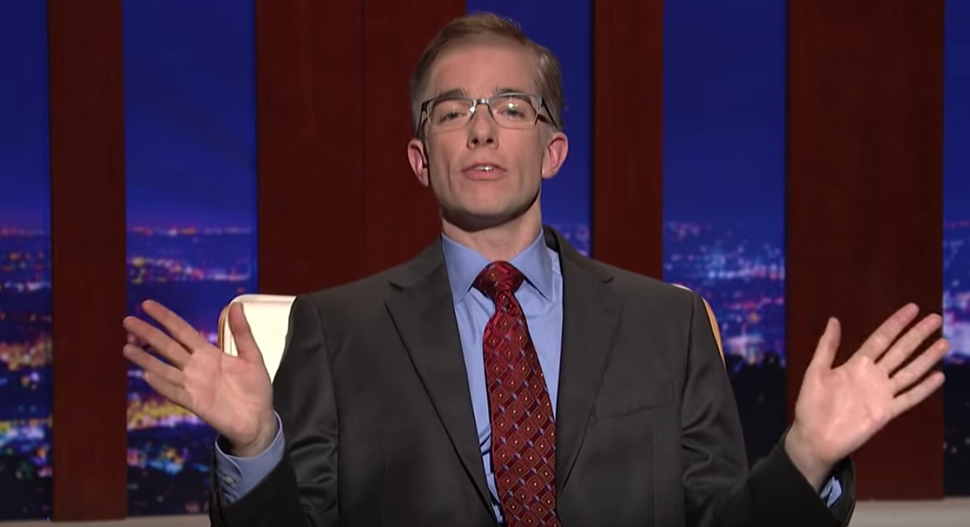 In a sketch patterned on the ABC reality investment show “Shark Tank,” comedian Mulaney (Jewish in our hearts) played lawyer Alan Dershowitz, offering his possible services as a legal counsel to billionaire New England Patriots owner Robert Kraft, who was recently and charged for soliciting prostitution.

The sketch also featured Jew-ish SNL comedian Pete Davidson (as Michael Avenatti,) and SNL’s Chris Redd as the disgraced Jew-ish actor Jussie Smollett. Let this be a friendly reminder from the Schmooze that it is always, always a good time to invest in Jewish pop culture figures.

The mostly painful sketch features Dershowitz and Avenatti on a panel alongside Jeanine Pirro (Cecily Strong), and Rudy Giuliani (Kate McKinnon). The ever-endearing Mulaney took on Dershowitz’s claim of social ostracism by the denizens of Martha’s Vineyard, and skewered the former Harvard professor’s ubiquity in high-profile cases. Mulaney, as Dershowitz, said, “Jussie, you’ve got everything I love in a client — you’re famous, you’re probably guilty — end of list.”

The sketch danced around the fact that Kraft, who was arrested for soliciting a prostitution, was brought down in a sex trafficking sting. “I’m also the only person ever to take a private jet straight to a $59 hand job,” said Beck Bennett, as Kraft — police say “services” at the spa where Kraft was apparently a “regular” cost as little as $59 for half an hour.

“Let the man have his fun,” the Dershowitz character responded. “Also, $59 in Palm Beach! I respect a man for getting a great deal.”

Dershowitz’s career is long, and he’s known for many things — pinching pennies is not one of them. It’s hard to see this line as anything other than anti-Semitic stereotyping, not to mention lazy joke writing.

Cecily Strong rescued the sketch with her hyper-realistic spoof of Judge Jeanine Pirro, shouting, of Jussie Smollett, “A gay, black man lying about an attack! I wrote Fox News fanfiction about this, but I never thought it would come true.”

View the spectacle for yourself here:

Correction, April 4, 2:10 p.m.: [An earlier version of this article incorrectly stated that Robert Kraft was “arrested and charged.” Kraft was charged, but never arrested.]