Kat Von D Makes Clear That She, Not The Jews, Is The Real Victim Of Anti-Semitism 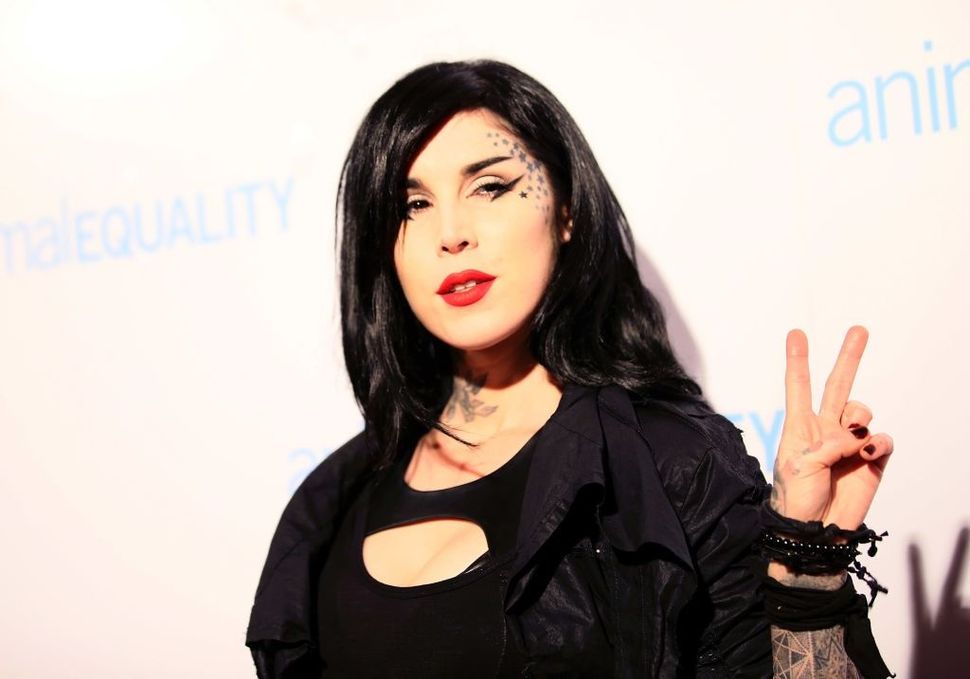 Like many of her peers, Kat Von D advertises her makeup brand as “vegan and cruelty free.”

But what about Kat Von D? Is Kat Von D “cruelty free”?

The celebrity makeup artist, who owns and runs a mega-successful makeup brand under her name, released a YouTube video on Thursday titled, “I am NOT a Nazi. I am NOT anti-vaxx.”

Notably absent in the video are: any mention of Jews, any disavowal of hatred against Jews, and any mention of anti-Semitism as a problem that affects anyone other than Kat Von D.

For the majority of her 11-minute monologue, Von D defends herself for the first time publicly against accusation that has persisted over a decade — that in 2008 she allegedly wrote a Jewish co-worker a note that said “Burn in hell, Jewbag.” Additionally, critics have noted that she compared the meat industry to the Holocaust (it’s worth noting that prominent Jews have done this too,) and that in 2015, her beauty line released a lipstick in the shade “Selektion,” a German word that is now considered taboo because Nazis used it to describe the process of selecting prisoners for death in concentration camps (the shade was renamed “beloved.”)

She has also been criticized for standing by and condoning anti-Semitism by association — in 2010 and 2011, she dated and became engaged to a man who was documented dressing as a Nazi and performing Nazi salutes, and her current husband has a swastika tattoo that features a star of David, an image she has shared online.

In the video, Von D acknowledges that she has never before publicly commented on the anti-Semitism rumors, but says that she was moved to because she has been “getting a lot of hate.” Is it possible that the criticism has actually begun to affect her business? It’s salient that Von D released this video as she teases the release of her first-ever shoe line.

“[This is] pretty hard for me to talk about,” Von D sighed, beginning the video. “I am not anti-Semitic, and I am not an anti-vaxxer,” she said. “Out of every comment I’ve gotten, the ones that are calling me and my family Nazis — these are the ones that don’t sit well with me. If anything, they’re extremely offensive and super hurtful,” she added, tearing up.

In the video, Von D explained that she could not be a Nazi because of her ethnicity. “I am, myself, a proud Latina,” she said. She went on to say that she was the victim of sexual harassment and assault on the set where she allegedly wrote the anti-Semitic note. And she defended never having spoken out on this topic before because she is in recovery from addiction — though it’s worth noting that in the time since the first accusations, she has established a beauty brand worth upwards of $40 million.

lmao so let me get this straight kat von d said she ain’t a nazi because she’s a latina ??? me tengo que reír

In Von D’s telling, she is the innocent victim of hatred, the survivor of a global anti-Semitism scheme perpetrated by a Jewish coworker. “It sucks that over this last decade every time this 8×10 comes up I have to, you know, be reminded of this really awful, traumatizing time,” she said. “And after all this recent hate, it’s just, you know, enough is enough and it’s time for me to finally speak up and set the record straight.”

You can check out Von D’s defense here:

Kat Von D Makes Clear That She, Not The Jews, Is The Real Victim Of Anti-Semitism