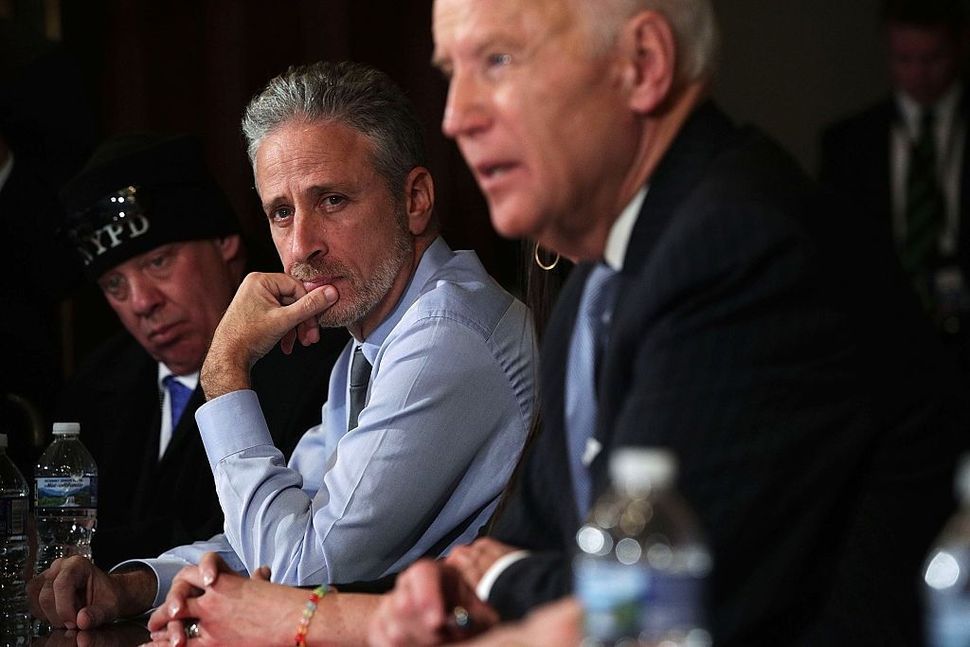 Taking a break from our regular light topics of refugees, anti-Semitism and gun violence, the country turns to another relaxing conversation: Is Joe Biden America’s fun uncle, or our creepy uncle?

As the former vice president is rumored to be launching a 2020 presidential campaign any day now, footage has resurfaced of the longtime politician physically handling women in a way some say is inappropriate. Videos show Biden squeezing and nuzzling women and giving them unusually long hugs. And several women have come forward saying that Biden touched them in a way that made them physically uncomfortable, though none have named the incidents as assault or harassment. And other women, who have had similar experiences with Biden, said they found him to us touch positively and appropriately.

In a statement released on March 31, Biden says that he believes he has never “acted inappropriately” during a physical encounter “on the campaign trail or in public life,” though he added, “If it was suspected that I did so I will listen respectfully.” On April 3, Biden put out a second statement, this time a video message. In it, he defended his belief that “politics is about connecting,” in ways like “Shaking hands, hand on the shoulder, a hug, an encouragement.” But he acknowledged, “Social norms have begun to change — they shifted. And the boundaries of protecting personal space have been reset. And I get it. I get it. I hear what they’re saying. I understand it. And I’ll be much more mindful.”

But the allegations against Biden aren’t bombshells. This is a tale at least as old as 2015.

As The Wrap reports, a Daily Show segment four years ago focused on this very issue. In the clip, hosted by Jon Stewart and featuring then-correspondent Samantha Bee, Stewart lambasts Biden for “groping” uncomfortable-looking women.

In the prescient clip, Stewart notes the swirling rumors that the then-vice president was eyeing a 2016 run. “But before we talk about a promotion, I think we need to take a look at how he’s doing in his current position,” he said.

The primary evidence Stewart’s team shows is footage of a swearing-in ceremony for defense secretary Ashton B. Carter, who is accompanied by his wife Stephanie Carter. In it, Biden seems to massage Stephanie Carter’s shoulders for almost 30 seconds. On March 31, Carter published a personal essay saying that she found Biden’s touch “supportive,” and that the image was taken out of context.

But a supercut of, as Stewart calls it, “over-the-top gratuitously handsy” moments from Biden, shows him stroking women’s faces, touching their hair, sliding his hands up and down their arms, and kissing them on the face, including teen and tween girls.

In a personal essay published by The Cut in late March, Lucy Flores wrote that when she was a member of the Nevada House of Representatives, she had a deeply uncomfortable physical interaction with Biden that involved him kissing the back of her head and rubbing her hair. Since then, more women have come forward with similar stories.

Caitlyn Caruso told The New York Times that Biden rested his hand on her thigh three years ago, when she was 19. Caruso says that she squirmed, but Biden didn’t stop — and that she was particularly uncomfortable because she had just shared with him her story of surviving sexual assault. D. J. Hill told the Times that at an event photo op with Biden he put his harm around her and then moved his hand down her lower back in a way that made her uncomfortable.

Still, other women have come to Biden’s defense — whether with similar stories about Biden they say were wanted and appropriate, or with positive character recommendations about the former vice president.

The conversation, no doubt, will rage on. Just remember, it didn’t come out of nowhere. Jon Stewart and Samantha Bee have been pointing it out for nearly half a decade.