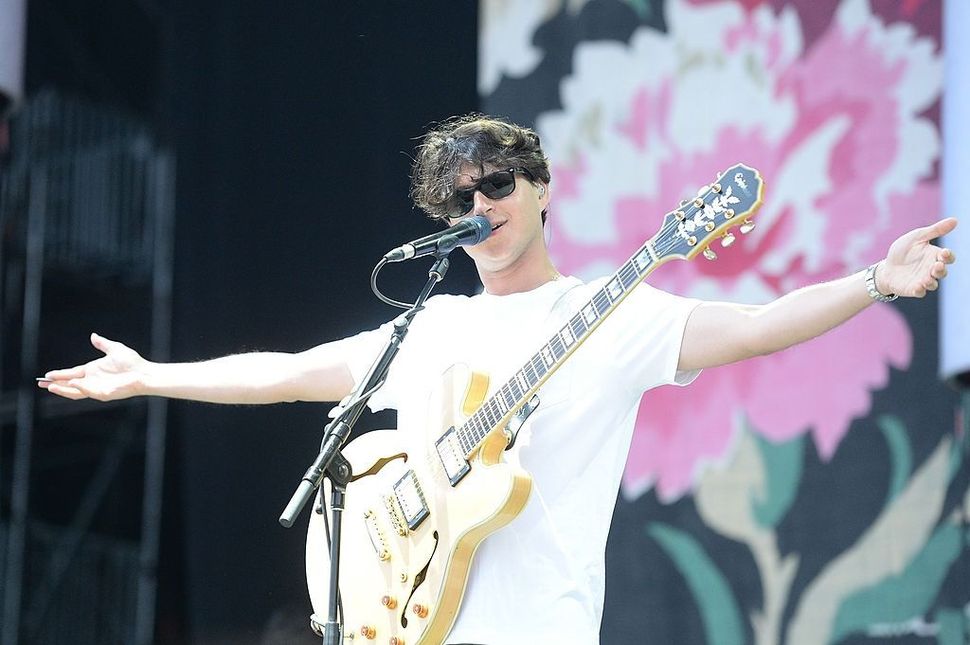 Imagine a rock album about falafel and delis, white supremacy and early modern Zionism. Whether you will it or not, it’s no dream.

“Father of the Bride,” the band’s fourth album, to be released on May 3, will feature the final track “Jerusalem, New York, Berlin.” In a feature with Jonathan Dean of the Sunday Times published earlier this week, frontman Ezra Koenig revealed that a song on the album will reference the 1917 Balfour Declaration, one of the first documents that paved the way to the founding of the state of Israel in 1948.

This, on top of the fact that the album’s first single, “Harmony Hall,” meditates on the rise of white supremacy. “Beneath these velvet gloves I hide the shameful crooked hands of money lenders,” Koenig croons, evoking centuries of painful Jewish history.

Discussing his Jewish identity, Koenig told the Times, “anyone with a brain can see people, both Jewish and non-Jewish, cynically using the charge of anti-Semitism in both England and the United States.” Koenig went on, “Jewish identity is increasingly fraught. I don’t mean violence is around every corner, just that, when everybody is talking about what it means to be a Jewish person, necessarily the concept becomes a mindf***.”

According to Jonathan Dean of the Times, Koenig felt strongly that fans should listen to the new album” before leaping to conclusions.

This is not the first time that the famed rock band has embraced Judaism in their music. On their last album “Modern Vampires of the City,” the song “Finger Back” depicts the story of an Orthodox Jewish girl falling in love with an Arab falafel shop employee. Another song dealt with the unknowable-ness of the Jewish god.

The band released a music video last month for their song “Sunflower,” showing Koenig going to various Jewish delis in New York. The video featured a cameo from Jerry Seinfeld and was directed by actor Jonah Hill.

Ezra Koenig is also in a relationship with Jewish actress Rashida Jones. The couple welcomed a baby, Isaiah Jones Koenig, in 2018. Born to Jewish parents in New Jersey, he attended Columbia University and started his own band, winning a Grammy for Best Alternative Album in 2014.