Billy Crystal Is 70, Thriving, And Headed To Broadway 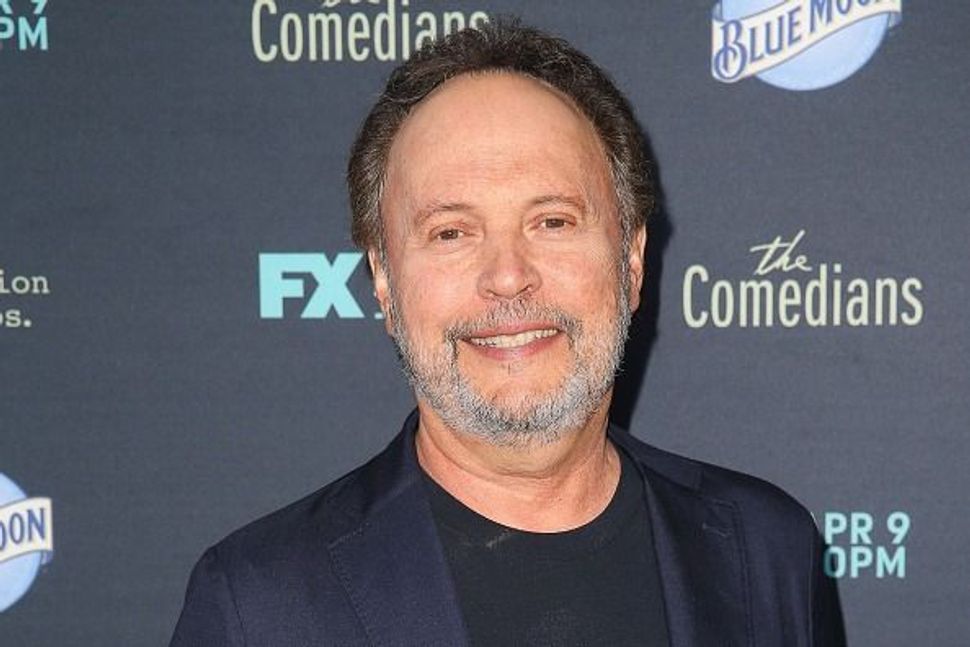 Actor Billy Crystal attends the premiere of FX’s ‘The Comedian’ in April 2015. Image by Getty Images

The man behind some of your favorite film roles isn’t afraid to get his hands dirty.

Billy Crystal is receiving one of Hollywood’s highest honors — he’s set to make an imprint of his hands and feet outside the TCL Chinese Theatre in Los Angeles, California on April 12, Variety reports. Alongside the ceremony will be a presentation of one of his most famous films, “When Harry Met Sally,” in celebration of its thirty years since being released into theaters.

Recently having celebrated his 70th, Crystal shows no signs of slowing down. His plans include a new movie, which will premiere at this year’s Tribeca Film Festival alongside comedian Ben Schwartz, a musical adaptation of “Mr. Saturday Night” (he’s assembled a Jewish creative team in Broadway composers and lyricists Jason Robert Brown and Amanda Green), reprising his role in “Monsters, Inc” for a new television series, and making his comeback as a film director since the 2001 drama “61.” And he’s excited by all of it.

The little indie @BillyCrystal and I star in “Standing Up, Falling Down” is making its premiere at the @TribecaFilm Festival! Excited for people to see what we cooked up. Written by @PeterHoare and directed by @mattratner. See you in NYC. #StandingUpFallingDown #Tribeca19 pic.twitter.com/OrSCJzxMJh

A Golden Globe, Tony, and Emmy Award winner multiple times over, he’s also had the privilege to host the Academy Awards nine times over the years. Plus, he just played his very first rabbi.

“It’s one of those things, when you start out in your career, you have hopes you’re going to do some good work,” Crystal tells Variety. “This is when you start thinking, “my parents were right, it all goes so fast.”

Throughout his illustrious career, Crystal has been able to capture audiences through his innate ability to weave humor and pathos. After studying in NYU under famed film director Martin Scorcese, he made his television debut in 1976 with an appearance of “Saturday Night Live,” a show that would later hire him for the 1984-85 season due to the same capabilities the world has come to know and love.

“I think [this honor] is long overdue,” “When Harry Meets Sally” director Rob Reiner told Variety about when asked about Crystal. “This is a man who is loaded with talent – he can do standup, he can direct, he can write.” Along with Crystal’s family, “he has this incredibly full life.”

Hailing from Long Beach, New York, Crystal has also found time for gemilut chasadim, or good deeds. The actor has worked with the Simon Wiesenthal Center of Tolerance, where he is personally featured in one of the museum’s exhibits. He also made a donation to Hebrew University in 2010 to create programs and theatrical performances as a way to bring Jews and Arabs together to promote tolerance and understanding of the others’ culture.

In the words of Crystal’s grandfather: “If you hang around the store long enough, once in a while they’ll give you something.”

Billy Crystal Is 70, Thriving, And Headed To Broadway