Next Up For The ‘Game Of Thrones’ Bros Benioff and Weiss: ‘Star Wars’ 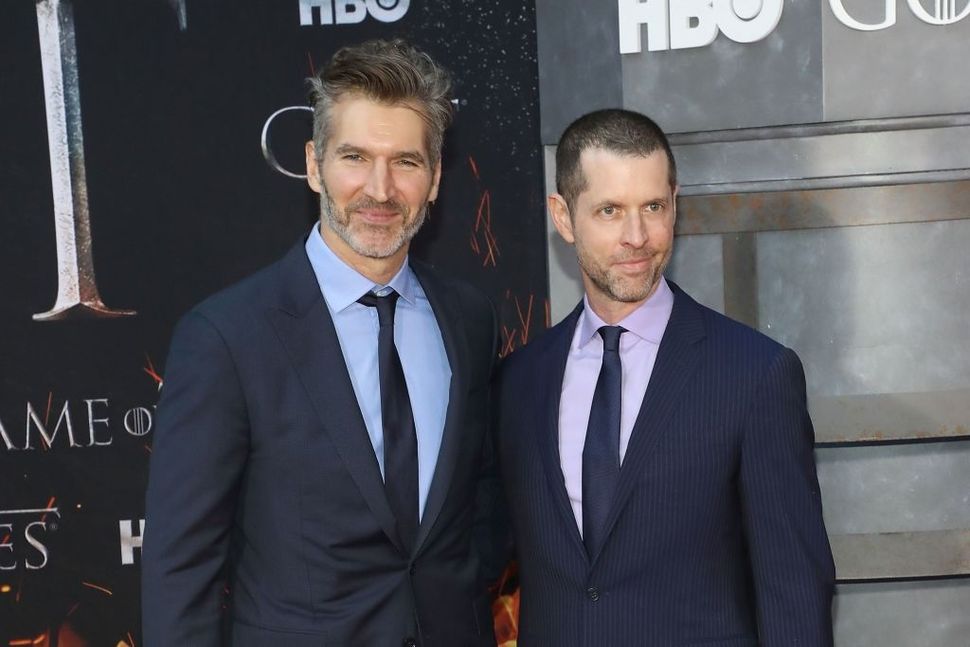 David Benioff and D.B. Weiss are responsible for the next “Star Wars” movie Image by Getty Images

When you look up and see three stars in the sky, that means “Game Of Thrones” is over and it’s “Star Wars” time again.

The boychiks who adapted “Game Of Thrones” for TV — David Benioff and D.B. Weiss — look to go from strength to strength as the epic series comes to a close on HBO on Sunday, after eight seasons. Their next project: a new “Star Wars” trilogy. They take the reins (the control panel?) from the hands of Jewish J.J. Abrams, who will helm the upcoming “Star Wars: The Rise Of Skywalker.”

Of course, there are now about as many “Star Wars” movies as there are corpses littering the fields of Westeros. But this isn’t just another installment — Benioff and Weiss are actually being handed the biggest artistic responsibility in the history of the series.

When the three “Star Wars” trilogies and their myriad film will end with “Rise Of Skywalker” in December 2019, the Skywalker saga will come to a definitive end. The “Star Wars” film helmed by Benioff and Weiss won’t be another installment in the iconic series, it will be a brand new story, one that exists in the “Star Wars” universe but without any of the characters or conflicts we’ve come to love and viciously critique. No more Luke, Leia, Han, or R2. No more Finn or Rey. Will there be rebels? Stormtroopers? CGI creatures so strangely endearing you don’t know if you want to cuddle them or kill them? We don’t know. Eyle toldot, as the Torah likes to say. These are the generations of Skywalker. And soon, they come to a close.

For Jews who are obsessed with other Jews (yes, we’re talking about ourselves), the fact that the destiny of this new “Star Wars” frontier will be manifested by Benioff and Weiss is thrilling. For fans of “Game of Thrones,” who in great numbers see the show runners as having torched (if you will) much of what was great in George R. R. Martin’s original show material, only time will tell.

So, David Benioff and D.B. Weiss, hear it now and hear it well from your beloved independent Jewish newspaper: please make a good “Star Wars.” Do not let your people down.

Next Up For The ‘Game Of Thrones’ Bros Benioff and Weiss: ‘Star Wars’