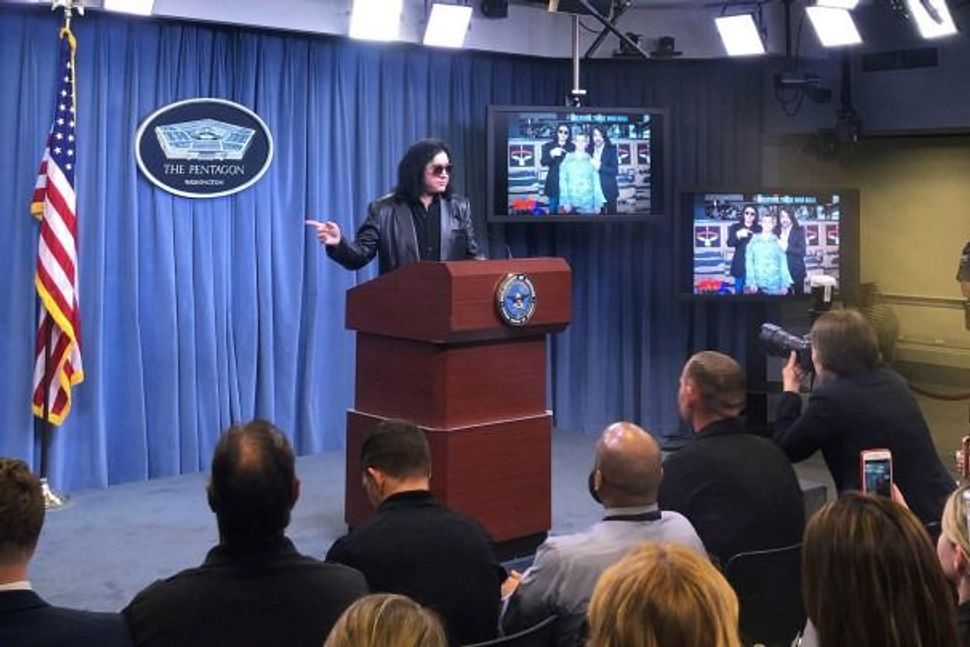 Gene Simmons stands in front of press reporters in the Pentagon on May 16, 2019. Image by Reuters

In a video posted to Twitter by CBS reporter Katiana Krawchenko, the star can be seen walking down the driveway with his wife, Shannon Tweed-Simmons, escorted by security.

Simmons’ visit to the home of the president was hardly the main event of his day. He surprised reporters in the Pentagon pressroom with a public press briefing, something the Trump administration hasn’t provided in that space in nearly a year. Simmons gave thanks to the armed forces, and discussed his love of Israel and the United States. Simmons emigrated to the United States from Israel with his parents when he was eight years old, in 1957.

“My mother was a survivor of Nazi Germany,” the singer, born Chaim Witz, told reporters, tearfully. “My mother just passed at 93, but if Americans could see and hear my mother talk about America, they would understand.”

“Every time my mother saw the flag, she’d start crying,” he said. “As an eight-year-old boy, I didn’t understand why, but from my mother’s point of view, we were finally safe. I may have been born in the country that people throughout history have referred to as the Promised Land, but take my word for it. America is the Promised Land for everybody.”