‘Law & Order’ Episode Asks: What If A Muslim Woman Politician Was Raped In A Synagogue? 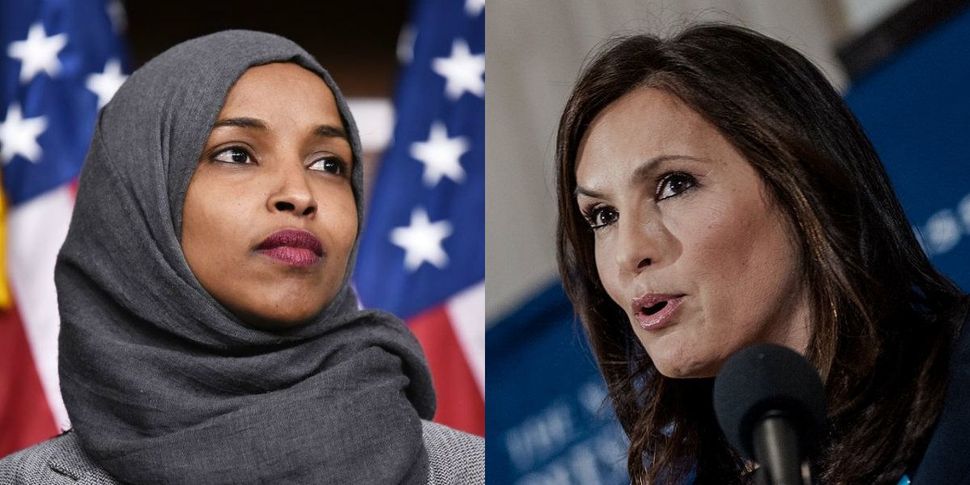 There is no question that the Muslim elected official at the center of a recent episode of “Law & Order: SVU” is based on real life Minnesota Congresswoman Ilhan Omar.

There is this question, though: Why would anyone think it’s okay to make a TV episode about an Ilhan Omar-inspired character being raped inside a synagogue?

Say it with us now: Oy, vey. This weird and wicked world has wrought a lot of odd things, but superimposing a fictional rape story onto a living United States representative to make a point about intersectionality has to be one of the most tiresome. That’s what audiences of “SVU” were treated to last week.

In “Assumptions,” the penultimate episode of the 20th season of the popular procedural, Special Units investigates the rape of a hijab-wearing city councilwoman who is, according to some, “an on-the-record anti-Semite.” Others say it’s her legitimate criticism of Israel that’s being vilified, and that there is confusion over her “choice of words.” Later in the episode, the character invokes funding for “Zionists from AIPAC,” and drops the phrase, “all about the Benjamins.” Quotes, of course, that recall Omar’s infamous tweets.

Spoiler alert: the Omar character was not raped by Jews as the evidence would suggest, but rather by her ex-husband. Uh — cool? But using a Muslim woman — a politician who faces constant death threats — to advance a rape plot? Pitting her against Jews in a way that makes Jews out (at least till late in the episode) as violent, sexual monsters?

In some ways, the feverish, uneven episode brings up the painful themes increasingly represented in news stories, especially those surrounding Omar’s relationships with Judaism. It depicts rising anti-Semitism and Islamaphobia and the reality that minority groups can victimize one another. The synagogue (the exterior of which looks to be Temple Emanuel in Manhattan) has endured vandalism, and wanted to educate the Muslim character using their Holocaust exhibit. The Muslim lawmaker has endured endless harassment and threats. “What happened to Ms. Lazar was horrible,” a Rabbi concedes in one scene. Then much more angrily, he adds, “But what she was saying, repeating tropes? Normalizing anti-Semitism? That’s how it started in Germany!”

This is all painfully life-like. What’s not is the storyline that conflates religious Jewish teens in New York City with the Covington Catholic teens in the Make America Great Again garb who confronted a Native American man in a tense and highly publicized interaction in January. At one point, the “SVU” episode recreates this famous tableau, but with a Jewish teen instead of the Catholic Kentuckian, and the Muslim female lawmaker instead of the older Native man. But Jewish teens haven’t been involved in prominent similar displays, and to conflate Jewish teenagers protesting alleged anti-Semitism with Catholic teens caught in an allegedly hateful act seems unfair, and ahistorical.

However, this pales in comparison to the affront of using a sitting congresswoman for a storyline about gruesome sexual assault.

Later in the episode, a white investigator explains the problem with the Muslim lawmaker’s comments to Ice-T, who is, somehow, in this show. “Imagine if she was saying these things about African Americans,” he instructs his black coworker. “Words have consequences.”

They sure do, “SVU,” they sure do. And so do the stories we tell ourselves.

‘Law & Order’ Episode Asks: What If A Muslim Woman Politician Was Raped In A Synagogue?