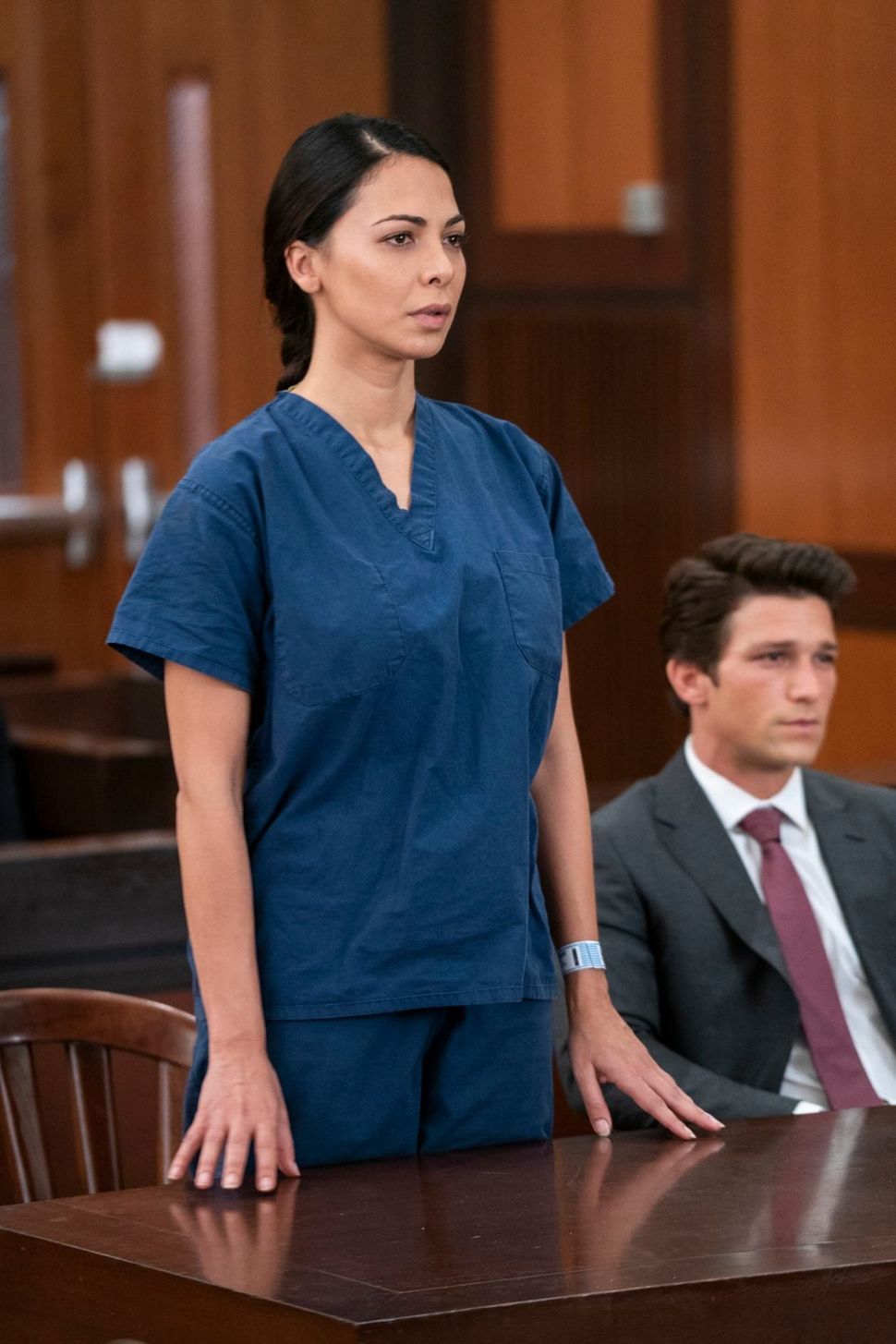 Moran Atias stars as Ava Behzadi in the NBC drama “The Village.” Image by NBC Entertainment

The Israeli actress told the Forward that her identity has shaped her career and the way she perceives the world. Born in Haifa to parents of Moroccan ancestry, her Jewish identity, she says, has never been separate from her acting.

Atias says this was confirmed early in her career, when she started finding work in Italy as a model and television host. The problem, Atias told her agent, was that she didn’t speak a word of Italian.

And she did. So fast, in fact, that the Prime Minister of Italy noticed.

Then-Italian Prime Minister Silvio Berlusconi told a reporter named Shira Felix that an Israeli woman was one of the top hosts in the country (“We have a wonderful Israeli girl working on our television,” he also apparently told then-Israeli Prime Minister Ariel Sharon.) This started a cascade of interviews and interest in Atias — in the end Paul Haggis, the Oscar winning moviemaker behind “Crash,” and “Million Dollar Baby,” created a movie for Atias to star in, “Third-Person,” based on an idea pitched by the actress herself.

Atias is modest about this kind of sudden, major success. “I just enjoyed to go around the world and represent our country, and our people most importantly, in a different way than was being presented in the news. I became a spokesperson for us, for our people,” she said.

A string of roles in television shows and movies across the globe followed. Starring on the Israeli television series “Allenby St.” made her realize how many opportunities there were for her in her home country, she said. Now, Atias stars in the NBC TV series “The Village.”

The drama, which will air its finale Tuesday night, has a simple premise: it follows the residents of an apartment building in Brooklyn, called “The Village.” Atias’ character is Ava Behzadi, a single mom from Iran who is arrested by Immigration and Customs Enforcement (ICE) under the suspicion that she is an illegal immigrant. When the crisis occurs, the residents of The Village, who have created a blended family despite vastly different circumstances, come to her aid. As Behzadi faces deportation, fellow Jewish actor Daren Kagasoff portrays law student Gabe Napolitano who assists with the case. Striving to create a safe and stable living environment for her U.S.-born son, Atias’ character experiences the complexities shared by so many immigrants — including falling in love with a local.

“Love is the thread that connects us all,” claims the show’s slogan.

And sure, it’s cheesy, but it sounds a little bit like the Jewish concepts of ahavat yisrael or tikkun olam, right? Atias’ character proves just how universal those values are.

Portraying a character like Ava could be daunting, especially considering the current political climate surrounding immigrants and refugees. For Atias, it proved to be the opposite — in fact, she loved taking on the challenge. “I never hesitate to talk about things that I think are uncomfortable or political,” she said. “Politics create our society. Whether it’s through education or laws that we’re passing in the legal system — it’s crucial.” Spoken like an Israeli.

As she researched for the role, Atias made sure to understand the complexity of Ava’s roots while remembering that basic human values are universal. “Ava’s facing deportation and the fear that going back to a country where her rights as a woman, as a human being, and as an artist are being threatened,” Atias explained. “I was looking to understand what [Iran’s] dynamics are between men and women, mothers and sons.” Even though Atias’ background is different than the character she portrays, she insists, “We’re all similar. We all crave love, respect and feeling valued.”

Atias, in turn, thanks her character for giving her the opportunity to understand the value of freedom. “People use [freedom] as a magical word,” Atias explained. But for a person dealing with threats of deportation, freedom isn’t an abstract concept. “It’s everything for her,” Atias said, adding that as an Israeli, accessing that feeling was easy. “We understand that — we still fight for our freedom every day in Israel.”

So what does Atias hope the viewers take away from each episode? A sense that community can be created even among people who are vastly different. “It is such a vital and important ingredient of our humanity,” she said. :It’s about leaving your heart open, offering to listen and to be of service.”

It’s something that comes off blatantly to a viewer who watches the show with her parents weekly, this writer knows “It makes my heart warm,” Atias said.

As for what Jewish value Atias carries with her every day, she pauses before answering: it’s the concept of helping our fellow humans -– a concept Atias has been passionate about since her humanitarian work in Haiti after the 2010 earthquake. “[The Jewish people] are taught to do a mitzvah — that’s the core of our culture, identity and religion. To practice tikkun olam every day – that is definitely something I’m proud of and hope I practice well.”

And so too, for all of us. It takes a village.

The season finale of “The Village” will air on Tuesday, May 21, at 8PM on NBC.