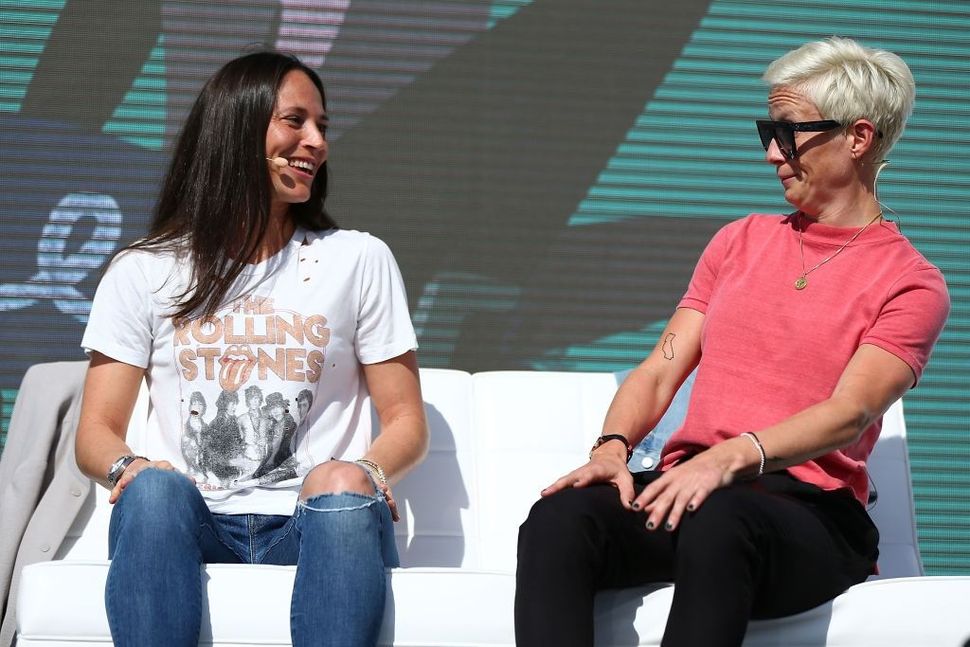 Filed under, Things We Wish Our Grandparents Had Lived To See: A lesbian Jewish basketball star passionately kissing the woman who led the U.S. Women’s Soccer team to yet another World Cup victory.

Related story: Megan Rapinoe’s Brother Was Once In A White Supremacist Gang. He’s Inked Over His Swastika Tattoos.

Your neighbor, your rabbi, and your president all now know about American soccer star Megan Rapinoe. Now it’s time to meet her partner, Sue Bird.

The longtime point guard for the Seattle Storm, Bird is a three-time world champion and a two-time WNBA champion, and boasts four Olympic gold medals. Essentially, Bird is the Megan Rapinoe of basketball.

The 38-year-old is also a Long Island Jew. She holds Israeli citizenship. And, as if a gift from on high to Jewish reporters everywhere, Bird is a graduate of Christ The King High School.

Rapinoe and Bird share a kiss after Sunday’s game.

On Sunday, Bird watched as star forward Rapinoe helped Team USA bring home the World Cup with a flawless penalty kick, giving US women their fourth win in history and their second win during Rapinoe’s reign. The 34-year-old scored six goals in the course of the World Cup, a feat under any circumstances, certainly considering that she was goaded by the President of the United States and a mob of critics as she led her team to becoming world champions.

Rapinoe, who has been involved in activism for pay equality, LGBTQ rights, and protesting racism with athletes like Colin Kaepernick, raised the ire of President Trump, who tweeted, “Megan should WIN first before she TALKS!”

“Megan should never disrespect our Country, the White House, or our Flag,” he added. As Team USA advanced in the championship, Rapinoe faced homophobic taunts and questions about whether she is a “real” American.

“So the President F*****g Hates My Girlfriend,” Bird titled an explosive op-ed in The Players Tribune on July 2, jumping with characteristic elegance into the fray. In a tour de force essay that is both blog-y and brainy, Bird dunks on Rapinoe’s haters. The focus of the news, she points out, shouldn’t be on a Twitter tiff, but on “a world-class athlete, operating at the absolute peak of her powers, on the absolute biggest stage there is,” she writes, acknowledging that the most powerful person in the world going “Full Adolescent Boy” on her partner has been scary.

She also sounds off on the issue of women athletes being paid pennies to do the same work as supremely compensated male athletes — even though when it comes to US soccer, the women’s team revenue exceeds that of the men’s team. “If you’re not on the right side of this fight, and advocating fiercely for equal pay — whether it’s in soccer, or basketball, or in any other industry, and across every intersectional boundary — then I just straight-up feel bad for you,” Bird writes.

?I LOVE YOU AMERICA (That is all. Now go vote)… . Full episode now streaming on Hulu #ilyamerica

Bird, trapped between her Jewish and non-Jewish identities (just kidding, that’s Bird with Sarah Silverman and Fred Armisen, getting out the vote.)

Bird’s father, a doctor, is Jewish, and her mother, a nurse, is Protestant. “I still had doses of both religions. It was kind of cool, I got the best of both worlds,” she told the Washington State Jewish Museum. Bird grew up in Syosset, New York, where she aspired to be a lawyer and a soccer player, but she played ball in Queens. There, she says, a rare experience for a Long Island girl as a racial minority helped shape her understanding of social injustice. A New York State champion in high school, she became a national star at University of Connecticut, then was an early draft to the Seattle Storm, where she has essentially ruled basketball ever since. She became an Israeli citizen in 2006, a decision she states openly was motivated by basketball — she wanted to play for a Russian team, to honor her father’s heritage, and European teams have a cap on the number of US players per team — but fell in love with Israel.

“Being just immersed and basically living there for a little bit…it was one of the best experiences,” Bird told the museum. “People have this kind of different image of what Israel is, and what it’s about. And yes, there are military people all over, but there’s so much more. Going to Jerusalem was an amazing experience…I spent most of my time in Tel Aviv. Gorgeous. There’s so much culture and I’ve made some friends that are lifelong friends. I got to get in touch with my whole dad’s side of the family, the family tree, I learned all about it. It was just an awesome experience.”

Bird and Rapinoe share a home in Seattle, where both star athletes’ teams are located. They’ve been dating since fall of 2016, and moved in together last summer. They met, of course, at a press day for the Rio Olympics. And they connected over their mutual interest in using their platforms to protest racial injustice.

“With Megan, I don’t have to explain,” Bird told the Seattle Times of the ease of their relationship. Both women came out to their families in college, but Rapinoe has been public about her sexuality since then, whereas Bird only came out publicly last year. “Visibility is king — or queen,” Rapinoe told the Times. And though Bird has always been wary of the spotlight, she has clearly been happy to learn from Rapinoe’s approach — in 2018, the two became the first gay couple to cover ESPN’s Body Issue.

Bird and Rapinoe in the 2018 ESPN body issue.

“Megan is at the boss level in the video game of knowing herself,” Bird writes in her Tribune op-ed. Bird, on the other hand, describes her attitude in a way other tribe members may find familiar: “Worry about it first…and then later, if there’s time, do it.” Loving Rapinoe, she writes, has provided her with something called “Megan Goggles” — a view of the world in which anything is possible.

In return, Bird makes Rapinoe eat more vegetables. Bird, the oldest player in the WNBA, has helped Rapinoe maintain her work ethic and workout schedule, the two told the Seattle Times. And Rapinoe says Bird is “My No. 1 go-to-for-advice person.” In their shared home, Rapinoe uses the lion’s share of the closet for her fashion finds. Bird stuffs her closet space with sneakers. They do have one serious point of contention — Bird is openly mixed about Rapinoe’s World Cup hairdo, which is bright pink. Nevertheless, she is supportive.

“I’m closer to 40 than 30. I’ve only been legally permitted to get married in the last handful of years. I’m a worrier, an overthinker, and — if it’s your type of thing — a 3x WNBA champion,” Bird writes. “But on Friday? It was like for this one, perfect, fleeting, uncomplicated day…I was everyone.” And, she adds, “I was in love with Megan Rapinoe.”