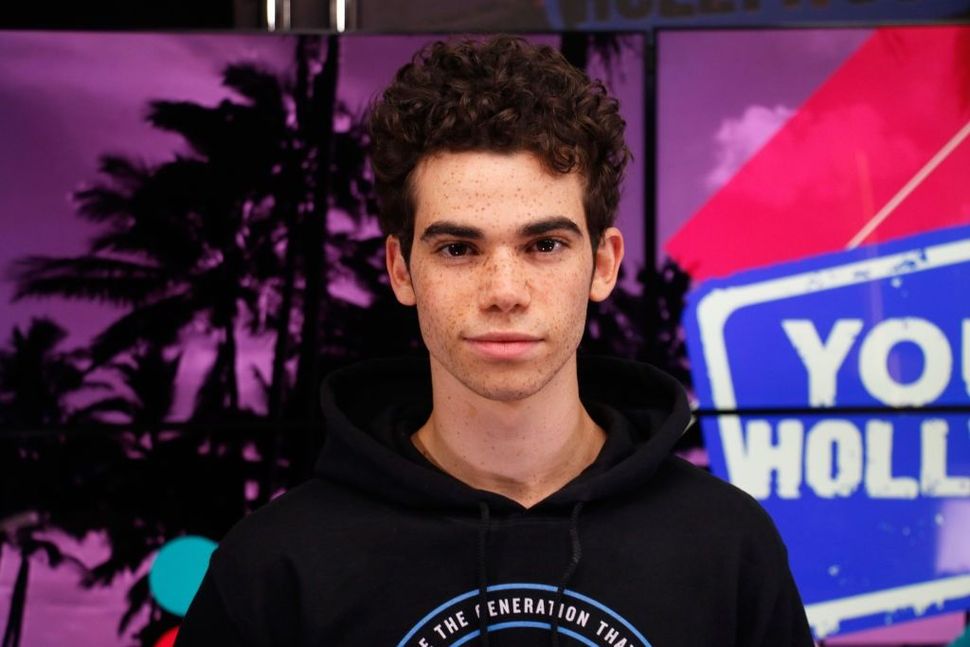 Fans are mourning actor Cameron Boyce, best known for his work on Disney Channel and Adam Sandler’s “Grown Ups,” who died this week at the age of 20.

Boyce was an exceptionally warm performer, a young person who ran to do good deeds. He cheerfully served as a role model for Jewish children of color, children of intermarriage, and all students who dream of diving into activism.

“His spirit will live on through the kindness and compassion of all who knew and loved him,” Boyce’s family said in a statement. They also shared that the actor died in his sleep of a seizure, “a result of an ongoing medical condition for which he was being treated.”

A fixture on the Disney Channel in the comedy “Jessie” and the Disney Channel original movie “Descendants,” Boyce had also starred in feature films and was set to play a reoccurring character in an HBO comedy from actress Kathryn Hahn and Oscar winner Nicole Holofcener.

But Boyce was another kind of descendant, too — the child of a white Jewish mother and a black non-Jewish father, Boyce was constantly conscious of his lineage. His grandmother, Jo Ann Boyce, was one of the Clinton 12, the group of a dozen Tennessee school children who were the first black students to attend the all-white Clinton High School in 1956, after the Supreme Court’s Brown vs. Board of Education forced integration. Boyce used his platform on Disney Channel to share his grandmother’s experience in a short film in 2016. As late as his final interview just this May, he was telling her story as “a black student in a school that the entire town wanted to stay white.” He told Haute Living, “We have to ensure — especially with some of the controversy plaguing us now — that we continue to push towards dreams that have yet to be realized.” When a reporter for Dazed tentatively brought up Boyce’s grandmother, he responded, “I’m always glad when people ask me about it because to me they don’t get nearly enough credit.” He spent time in the interview promoting the book Jo Ann wrote about her experience.

Boyce took enormous pride in his minority identities, speaking openly about how his overlapping identities framed his worldview — and pushed him to pursue justice. “Being African American and Jewish, I have plenty of ancestors and family members that I can look to for strength, and more importantly, for a grateful outlook on life,” he said]. “Every one of them clawed and scratched for my sister and I to be in the position we’re in today.”

In September 2017, Boyce publicized the trip to the Anne Frank House in Amsterdam where the teenage diarist and her family hid with other Jews until they were betrayed. Boyce shared images of himself touring the Secret Annex with his mother, a Jewish social worker who works with the homeless population of Los Angeles and provided care during the AIDS crisis. Boyce is quick to display gratitude for his mother; upon meeting Joe Biden he got permission to call his mother and put her on the phone with the presidential hopeful. In an Instagram post, Boyce honored women in his life, including his mother, sister, and grandmother, calling them, “Women that strike fear in the hearts of men who are scared of inevitable change!”

Nodding to philanthropy is expected of child stars, but Boyce went far beyond that, using his platform to raise money, spread ideas, and protest injustice. He raised tens of thousands for the Thirst Project, a non-profit that focuses on clean drinking water, raised money for homeless Los Angeleans, and supported the March For Our Lives protest for gun safety.

“What you leave behind should be bigger than you,” Boyce said last year, addressing a crowd at the Biden event. “I really believe that.”