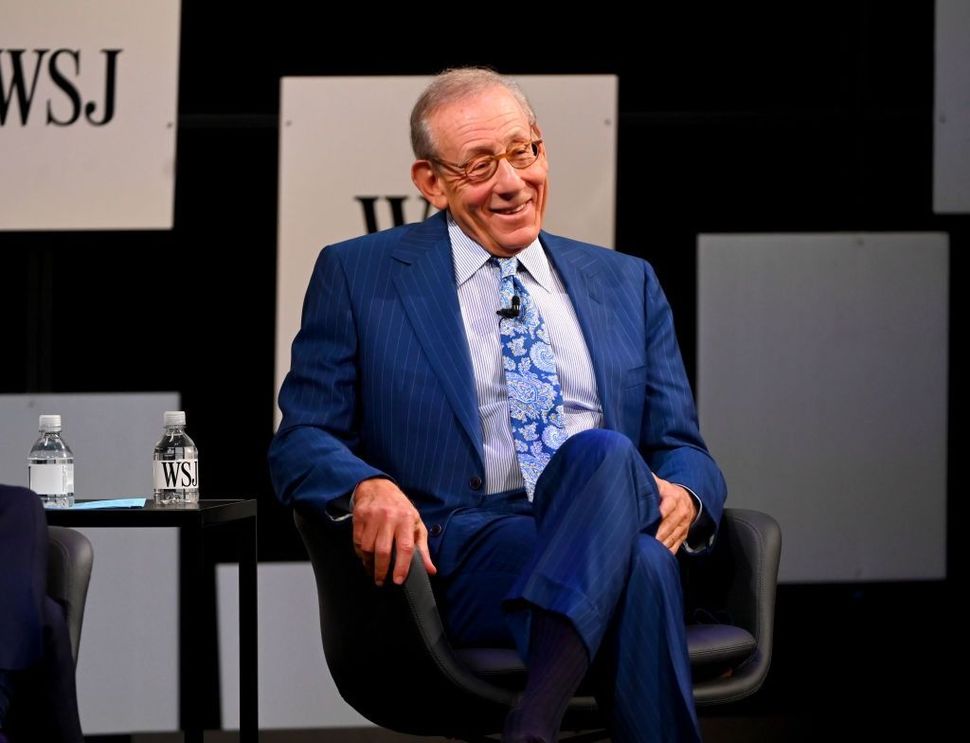 Such are the phrases you will hear if you enter a SoulCycle, the wildly popular fitness company that offers group stationary-biking classes and mood-lit spirituality for a steep fee. (A single class at a Manhattan SoulCycle costs $36, which is 2.5 times the state’s minimum hourly wage, for reference.)

No word yet on whether these maxims, popular with SoulCycle instructors, will be recycled at the fundraising event that business tycoon Stephen Ross plans to throw this Friday on behalf of President Trump. Ross, the Jewish real estate developer behind Manhattan’s Hudson Yards, owns the popular cycling studios as well as the luxury athletic chains Equinox and PURE Yoga, plus the cheaper alternative chain Blink Fitness.

With his wife Kara Ross, the businessman and owner of the Miami Dolphins has invited supporters of the President’s reelection campaign to his Southampton home for a cool $100,000 (that includes lunch and a photo opp,) and $250,000 for a more comprehensive package, The Washington Post reports.

Individual donations directly to political candidates are capped at $5,600, but the Post notes that people can contribute as much as $710,000 to national parties. So far, the President’s 2020 campaign, including groups connected to the campaign, has hit $237 million in donations. (That’s nearly half the amount such groups raised during the last presidential cycle – and there’s still more than a year until election day.)

Ross, whose net worth is $7.6 billion, is a major philanthropist; hundreds of millions of dollars in gifts have made him the largest single donor to the University of Michigan. He’s a signatory to The Giving Pledge, a movement popularized by Bill Gates and signed by Mark Zuckerberg, in which billionaires to pledge to donate at least half of their money by the time they die.

As the Miami New Times colorfully put it in 2013, “Stephen Ross isn’t a total tightwad.”

But he hasn’t always been partisan – he gave major money to both Democrats and Republicans in 2016. In fact, Ross has gone out of his way to give to progressive causes, including the World Resources Institute, which focuses on environmental sustainability.

Additionally, a few years after buying the Dolphins, Ross founded the Ross Initiative in Sports for Equality (RISE), which focused on racial inequality in professional sports. Though he first supported athletes like Colin Kaepernick who chose to kneel during the singing of the national anthem as a peaceful protest of American racism, he revoked his support for players after the president lambasted them in September 2017, Town & Country noted. (Trump famously tweeted, referencing Kaepernick, “Get that son of a bitch off the field right now, out, he’s fired. He’s fired!”)

Despite that embarrassing episode, Ross apparently has decided to support the president — perhaps his SoulCycle instructors have been shouting into their wireless microphones: “BETO (PHONY NAME TO INDICATE HISPANIC HERITAGE) O’ROURKE, WHO IS EMBARRASSED BY MY LAST VISIT TO THE GREAT STATE OF TEXAS, WHERE I TROUNCED HIM, AND IS NOW EVEN MORE EMBARRASSED BY POLLING AT 1% IN THE DEMOCRATIC PRIMARY, SHOULD RESPECT THE VICTIMS & LAW ENFORCEMENT — AND BE QUIET!”

No doubt, Google searches for “Who owns Barry’s Bootcamp” will soar.