36 Things Jewish Men Say On Dates When They Realize I’m Jewish, Too 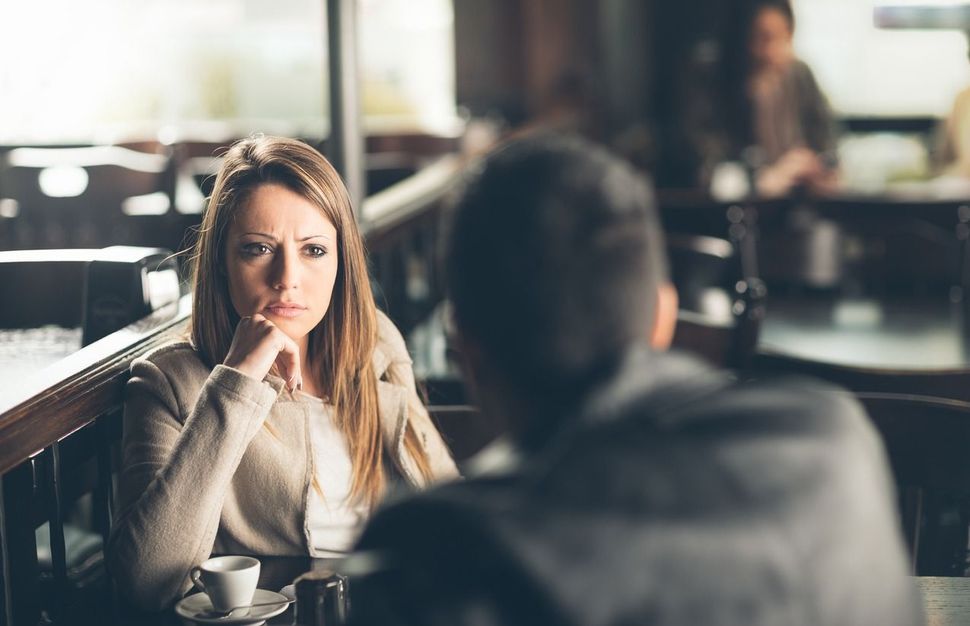 ‘I bet this next story about his bar mitzah is going to be really good.’ Image by Getty Images

Recently, I found myself on a date with someone I was sure was Jewish. We were in New York, and he had brown hair and the first name of a biblical hero — what was I supposed to do, ask to see his foreskin?

He was not Jewish, as it turned out. And on our date, I learned a lot about Conservative Christian theology and the homeschooling system. But you are polite and from New Jersey, I wanted to say! You are wearing khakis and a button-down! How dare you deceive me like this!

In the Orthodox world, “Will we send our daughters to Bais Ya’akov?” could be a reasonable first date question. In most other cases, religion is considered an iffy topic for a first date — even if both people on the date are Jews who are both pretty sure they want to live and die without owning a Christmas tree.

In New York — where so many Jews convene to live non-religiously, surrounded by the trappings of cultural Judaism — mentioning Judaism on a date can bring up a kind of Proustian flood of emotion, like crumbling a glatt kosher madeleine into your date’s IPA. Mention Passover plans, or absentmindedly toy with a magen david necklace, and watch the conversation move from “Do you have siblings?” to “I was raised Conservative, but lately I’ve been going to Downtown Minyan, and I just tried bacon while I was on shrooms and I don’t know how to feel about it.”

Cut down from a list of 72, the Forward presents: Real Things Men Have Said To Me On Dates Or On Dating Apps After Making The Connection That Both Of Us Are Jewish.

3.Do you know my friend Josh?

6.Let me tell you all about my bar mitzvah, from the beginning.

8.You, your parents, and your sister all have jobs at Jewish organizations? That’s cool. I guess for me, I just think organized religion is a pathetic exercise in brainwashing.

9.I had Parshat Emor.

10.You don’t look Jewish (OR) I knew you were Jewish, because of how you look

12.It’s interesting that you write about Jewish people for a living, as if being Jewish is some kind of inherently interesting quality, rather than an ethnocentric obsession that grossly divides us and hardly falls short of race science, haha

14.(People who have read half of Bereshit) I’ve read the whole Torah.

16.I am very similar to Larry David.

17.There’s this funny thing about me, which is that I really like the TV show “Seinfeld.”

19.We both agree that Israel is the one stronghold of the Jewish people and can do no wrong, right?

20.We both agree that the existence of a Jewish state is inherently racist, right?

21.I had that Torah portion that has all the animal sacrifices.

22.Do you know any Orthodox Jews? I don’t. They’re crazy! Have you seen the documentary “Footsteps”?

23.(After two drinks, leans in close, stage-whispers) I actually do believe in God. There has to be SOMETHING out there right?

24.Where did your family come from? The Pale?

25.(Laughing darkly, as if confessing to murder) I dropped out of Hebrew school.

26.I see you’ve dyed your hair blonde. What’s that about?

27.Have you done a heritage trip to the camps?

28.So do you have to marry a Jew, or what? Because I would never marry a Jew who would only marry a Jew.

29.Let’s try on each other’s glasses and see whose prescription is stronger.

31.Yes, I KNOW what the Forward is, I just don’t like your Israel coverage.

32.I know what the Forward is! My grandpa, who is dead now, used to read it.

33.One second. (To waiter) Excuse me, hi? I’ll actually have the pork ramen, instead of the chicken.

34.My family doesn’t believe in synagogues. We had a little group where we had Shabbat dinners together, organized by an imam.

35.I was sort of the king of [insert: USY, Ramah Nyack, NFTY, Habonim Dror]

36.My family quit our synagogue because we didn’t want to pay dues anymore. (Twenty minutes later) Do you know anywhere that does free Rosh Hashanah services?

36 Things Jewish Men Say On Dates When They Realize I’m Jewish, Too