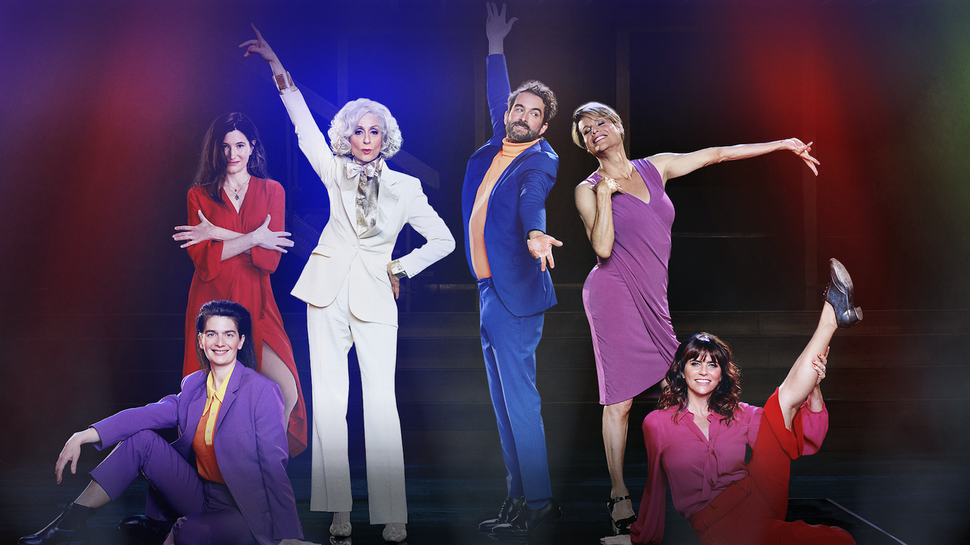 If you think the 70-minute musical finale of Amazon Prime’s “Transparent” doesn’t end with a barn-burning group number called “Joyocaust!” take a hit from your nearest source of cannabis and think again.

“Transparent,” the first prestige TV show aimed squarely at presidents of Temple social action committees, dropped its final episode on Friday. Show runner Jill Soloway, whose own parent had come out as trans, introduced us to the Pfefferman family in 2014, each member more narcissistic and allergic to healthy decision-making than the next. The fourth season, which took the family, compellingly, on a pilgrimage to Israel and the West Bank, left much unfinished business.

But — for pragmatic reasons, as well as artistic ones — Soloway decided to forego the show’s normal episodic format in favor of a single episode conclusion to the Pfefferman family’s four seasons of pain. Jeffrey Tambor, celebrated for playing “Transparent” patriarch-turned-matriarch Maura, was fired from the show in February 2018 in the wake of sexual harassment allegations, which he denied. In his absence Soloway, who uses the gender-neutral pronouns “they” and “them,” collaborated with their sister, musician Faith Soloway, to end “Transparent” as it began — moving, deeply uncomfortable, and obscenely Jewish.

Maura is dead. Setting aside the din of discussion concerning what should happen to artists who are accused of violating their coworkers, she’s not missed. Each of Soloway’s characters is so meticulously realized, you can predict who will write a play about her life and cast herself as the star, who will refuse to answer her children’s questions about Hitler, and who will demand to be recognized as a priestess. The Pfeffermans are nearby where we left them, with slightly more therapy — oldest sister Sarah (Amy Landecker) is bored and emotionally squeamish, trying out monogamy once again. Second-child Josh (Jay Duplass) is addressing his love and sex addiction, but refusing to acknowledge his love and lust for Rabbi Raquel (non-Jewish icon Kathryn Hahn.) The family baby (Gaby Hoffmann) has come out as gender non-binary, changed names from Ali to Ari, and is as lost and found as ever. The biggest difference is matriarch Shelly (Judith Light, perfect) who, finally free from reckoning with Maura’s indifference, is ready for her spotlight.

The finale is shorter than a movie but longer than a TV drama. It’s the end of our characters’ journeys that also feels like just a snapshot. And it isn’t a musical; it uses musical theater numbers (most sound like easy-listening takes on the least popular songs from “Rent”) to deepen our understanding of the characters’ psychic states, but not to move the story along. Using the recurring motif of Abraham’s journey of “Lech-Lecha” (God’s invocation to the father of his people,) Soloway’s characters spend the episode encountering themselves, seeking, vaguely, blessing. The format of a monumental loss is convenient for bringing together old characters and coaxing out epiphanies. But Soloway isn’t concerned with death or mourning — though the scene where the siblings insert Maura’s body into the crematorium is a wild portrait of contemporary grief. Soloway’s interest is trauma — how it contorts and consumes the individual, the family, the community, and the world.

And Soloway’s answer to trauma — Chabad-like, if you ignore the sexed-up woman rabbi convening a Rosh Chodesh retreat for menstruating tweens — is even more Judaism. “The messiah isn’t a person,” says Ava (Shakina Nayfack), the transgender owner of Turbo-Nugz, a mobile weed dispensary, in an early scene. “It’s an idea. And the idea is that we’re all messiahs.” This understanding of the Messiah is popular with liberal-leaning rabbis and theologians, and, typical of Soloway’s L.A.-Reform approach to Judaism, it feels perilously placed on a rickety foundation of knowledge but cannily perceptive about central ideas of Jewish thought. The Pfeffermans orbit between Reform and cultural Judaism, but challenge the idea that those identities are “less” Jewish — their obsessions with memory and the past, and their supreme neediness for divine and human leadership mark them out as terminally Jewish. Their endless carping over whether a non-binary b’nei mitzvah ceremony should be termed a “BART Mitzvah” is a feature, not a bug.

Same goes for the finale’s finale — the jazzy “Joyocaust,” which convenes just about every star and guest star in the series’ history for a ribald, kick line-y number about, well, healing from the Holocaust with an “equal and opposite reaction” of joy. Kicked off by matriarch Shelly after an on-the-hook-nose bit about clapping in services, “Joyocaust” (refrain: “Hell yeah, we crossed the line!”) is intentionally grotesque. Giving up our reverence for our own trauma, the Soloways’ song suggests, is necessary to confront it.

“Six million ain’t no joke/We win for losin’ folk!” the cast, clad in a rainbow of jewel tones and pastels, belts as they scamper through the forest on the edge of the family’s multi-million dollar property. It’s pretty brilliant, but embarrassing. And like much of “Transparent” — and much of liberal ideology — it claims to be radically welcoming, though it’s made to the exact specifications of well-off, educated white people. A Mizrahi Jew or, for that matter, a Holocaust survivor, might find little to enchant in the “Transparent” crew’s “celebration of the soul/For this extermination Super Bowl.”

Jazz hands! The “Transparent” musical finale suffers from an abundance of ambition and an overuse of the word “tooshie.” But it nails specifics of Jewish life — acquaintances inhaling Ashkenazi food on your easy chair while your loved one’s body cools, the feeling that interpersonal boundaries are mysterious and may not even exist. It’s a contribution to the cannon of Jewish art, but with the awkwardness of an actual shiva minyan. Come for a look at the messy vitality of liberal American Judaism, stay for the catchiest song about the Holocaust since “Springtime For Hitler.” Come some, come all — rabbi’s kids, synagogue administrators, habonim dror graduates, mothers trying to figure out why their kids joined If Not Now — this one’s for you. Orthodox Jews should stop by, too — lord knows us progressive Jews have been doing our part, bingeing “Shtisel.” In fact, everybody — get yourself a woman rabbi, get yourself some Turbo-Nugz, and get yourself a Joyocaust.