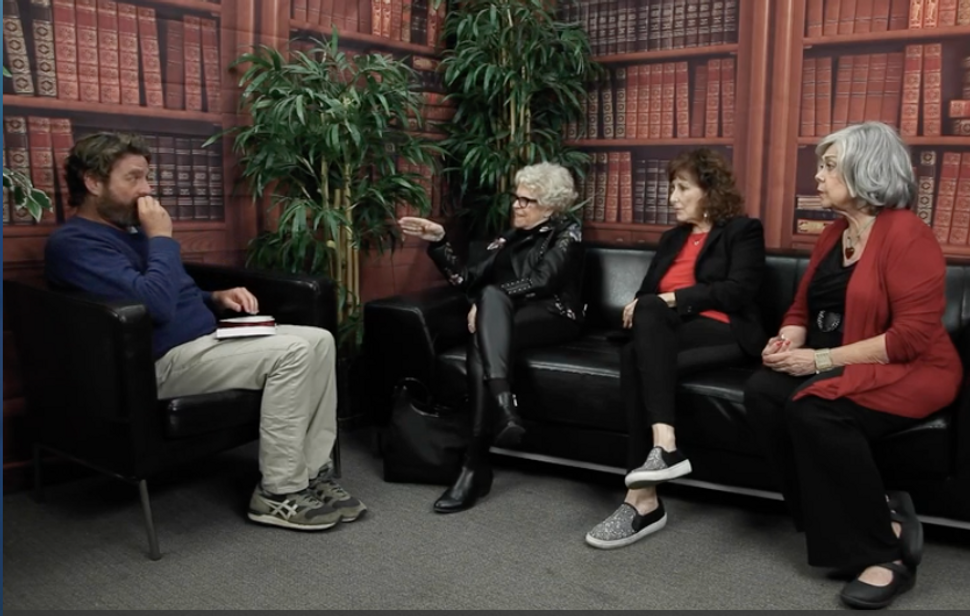 Zach Galifianakis, with (from left) Bubbies SJ, Linda, and Bunny Image by JLTV

“Jews are like, my favorites,” says Zach Galifianakis, sweating, clutching a heart-shaped box of Russell Stover chocolates, as three Jewish grandmothers take him in.

“I gotta tell ya, man, I love the Jews,” he rambles on moments later, the three women eying him like the fates toying with a piece of thread. “I have always just…there’s something about them, funny as s**t.”

“I have a Jew-fro,” Bubbie Linda remarks, suddenly, and Galifianakis turns ketchup-colored and puts his head in his hands.

Zach Galifianakis — king of discomfort, comedy marvel, rumpled wonder — was outmatched by three Jewish grandmothers during his appearance on “Bubbies Know Best,” a show on the Jewish Life TV network.

Zach Galifianakis getting read for filth by a Jewish grandmother

Promoting his new Netflix movie “Between Two Ferns,” which concerns public access interview television, Galifianakis visited actual public access shows, including a 21-minute segment on “Bubbies.” You should watch all of it before this burning, quaking, sweatshop-y world steals every last speck of your joy. This is 2019, and this is as good as it gets.

In the clip, which for some reason runs backwards in time like a Pinter play (it starts mid-plot, works backwards until the Bubbies meet Zach at the fourteen-minute mark, then carries on,) the 50-year-old comedian endures questioning by S.J., Linda, and Bunny. The group agrees that, like in Galifianakis’ Greek heritage, family is “really important, almost suffocating” in Jewish culture, too. They discuss how to pronounce the comic’s last name (“Gali-f**kin-what?”)

And then Bubbie Linda — Cantor Linda Rich, the first female cantor in the Conservative movement — says, pleasantly, “Zach, if you converted, you know, you’d have to draw blood off … the area down there.”

Let’s head to the transcript, for a full-bore joy experience:

Galifianakias: If I’m uncircumcised, and Bunny and I get together and decide to get married, I have to —

Bubbie SJ: You have to cut a part of your PENIS.

Bubbie Bunny: I’m worth it!

Galifianiakis: (To Bubbie Bunny) Well, what are you going to do to your vagina?

Galifianakis, apparently miserable at having made a joke about a kindly grandmother’s vagina to her face, sinks into his chair, sweating harder. Later, asking a squirming Galifianakis about the exact dimensions of his, uh, outstretched hand, one of the women asks, “Is this too personal?”

Please believe, I get no personal kickbacks for recommending that you watch this video, which is like the comedy version of those pictures of kittens cuddling with large dogs. I just want you and everyone you’ve ever met to know the joy of Zach Galifianakis and three Jewish matriarchs insulting each others’ sneakers.

Things are, admittedly, a little bleak out there. Let this phallic-themed roast war won handily by Jewish grandmothers be your guiding light.