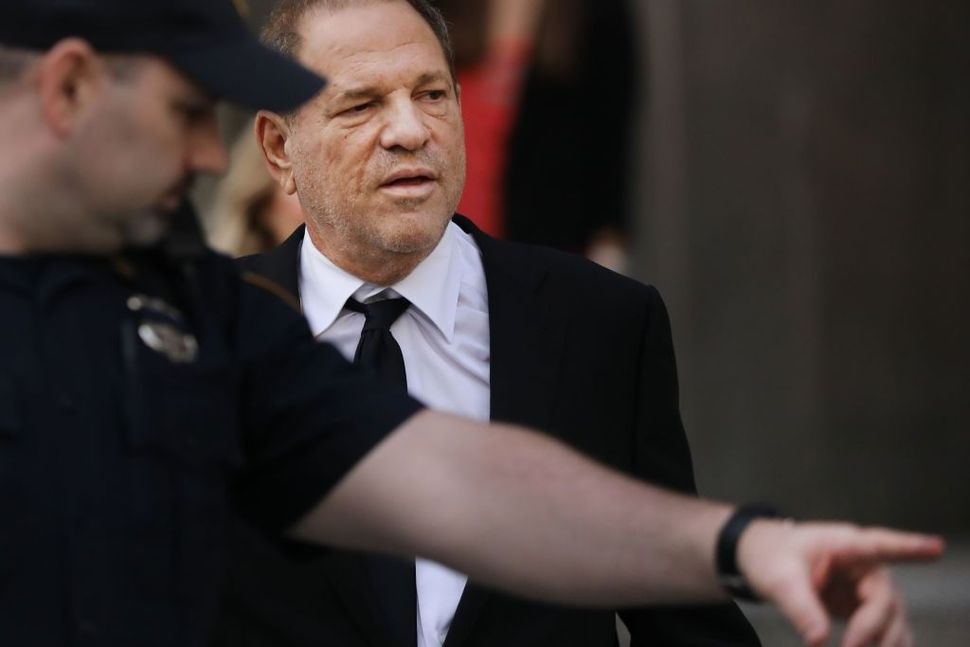 Harvey Weinstein, facing multiple charges of rape, was out on the town this week Image by Getty Images

“In a place where there are no humans,” 1st century Jewish sage Hillel said, “Strive to be human.”

At a comedy showcase attended by Harvey Weinstein on Wednesday night in New York City, three people confronted the movie producer, who has been accused of sexual assault by over 80 women.

Weinstein, who is currently out on bail, sat with several companions at a candle-lit table at Actor’s Hour, a monthly showcase for performers on Manhattan’s Lower East Side, BuzzFeed reported.

One performer, 27-year-old Kelly Bachman, addressed Weinstein during her set, calling out “the elephant in the room.”

“I didn’t know we had to bring our own mace and rape whistles to Actor’s Hour,” Bachman said, explaining that she was raped “surprisingly by no one in this room,” in a now viral clip. Her set was booed. “Shut up,” a male voice shouts over her.

Was it something I said? ? thanks for making sure industry was in the room for my spot @actorshour ?

The Downtime Bar, the venue for the show, posted on social media, apparently referring to Stuckless, that they removed a “heckler.” The post has since been removed.

A third person, 31-year-old comedian Amber Rollo, confronted Weinstein, calling him a “f*****g monster.” She told BuzzFeed that a man at Weinstein’s table called her a “c**t,” and a woman at the table escorted her out of the building.

Alexandra Laliberte, who organized the event, told BuzzFeed that it was Weinstein’s second time at her showcase. “I welcome all walks of life into my space,” she said.

“This scene was uncalled for, downright rude, and an example of how due process today is being squashed by the public, trying to take it away in the courtroom too,” a representative for Weinstein told the Hollywood Reporter.

It’s like there just isn’t any civility any more, even for the really, really rich rapists.