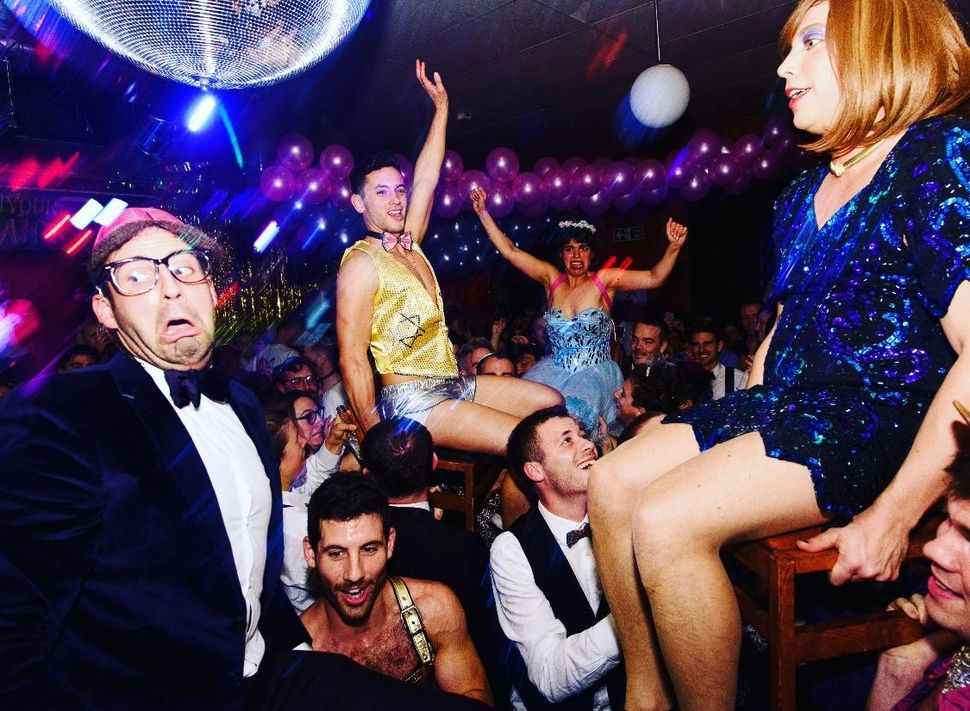 All ‘genders, all races, all sexualities, all religions’ are welcome at Butt Mitzvah Image by Mike Massaro & Peter Fingleton

To life, to health, to great friends, and to butts: l’chaim.

Fat-bottomed girls, Miss New Booty, and all the honky tonk badonkadonks of the tri-state area will be joyfully grinding to the nusach of the Thong Song this Saturday in Williamsburg at Butt Mitzvah, a queer Jewish nightclub event.

A “cumming of age ceremony” (their words, not ours) inspired by the ancient tradition of the bar mitzvah, Butt Mitzvah is an immersive nightclub event developed by Brit Josh Cole. The evening, which has seen up to 1,000 guests a night in its twice-yearly London iteration, celebrates and subverts the Jewish lifecycle staple, making it adults-only, queer, and sparkly. “In terms of bar and bat mitzvahs, all LGBT Jews can relate to a sense of isolation at this age and being at those functions and not feeling like you necessarily belong,” Cole says. Butt Mitzvah seeks to reverse that, welcoming “all genders, all races, all sexualities, all religions” to one big party.

Expect klezmer music, chair-lifting, abundant snacks, and that classic round-and-round spiralized dancing, at the “Challahween”-themed party. Expect also: drag queens, a butt mitzvah girl chosen for her salacious last name, and unmitigated, uncompromising joy. “Butt Mitzvah is for Jews and non-Jews, you don’t need to know the Torah to be part of Butt Mitzvah,” Cole said. “There’s no implicit knowledge required.” He said he hopes people who don’t always have an “obvious” place in the Jewish community — people with just one Jewish parent or grandparent — will feel at home.

If the whole thing seems a little vulgar or over-sexualized to you, think of it this way — queer Jews grow up hearing the Leviticus 18 verse, “Do not lie with a man as one lies with a woman; it is an abhorrence.” Butt Mitzvah is about radical acceptance, seeing yourself in the eyes of your community not as an abhorrence but as a reason for rejoicing. “I think having some reference to vulgar wordplay makes it overtly gay and unashamedly sexual,” Cole says. “The night itself is not sexual,” he adds, but like its title, it is “identifiably gay and queer, and overtly Jewish.”

So take them baggy sweat pants and the Reebok’s with the straps (the straps) down to 3 Dollar Bill this Saturday, and celebrate becoming a member of the covenant of pride in your own existence. “New York feels like a sort of homeland for Jews, and it feels like a spiritual homeland for Butt Mitzvah,” Cole said. “Obviously,” he added, “Israel is a nation for Jews. But New York is the place for the Butt Mitzvah.”