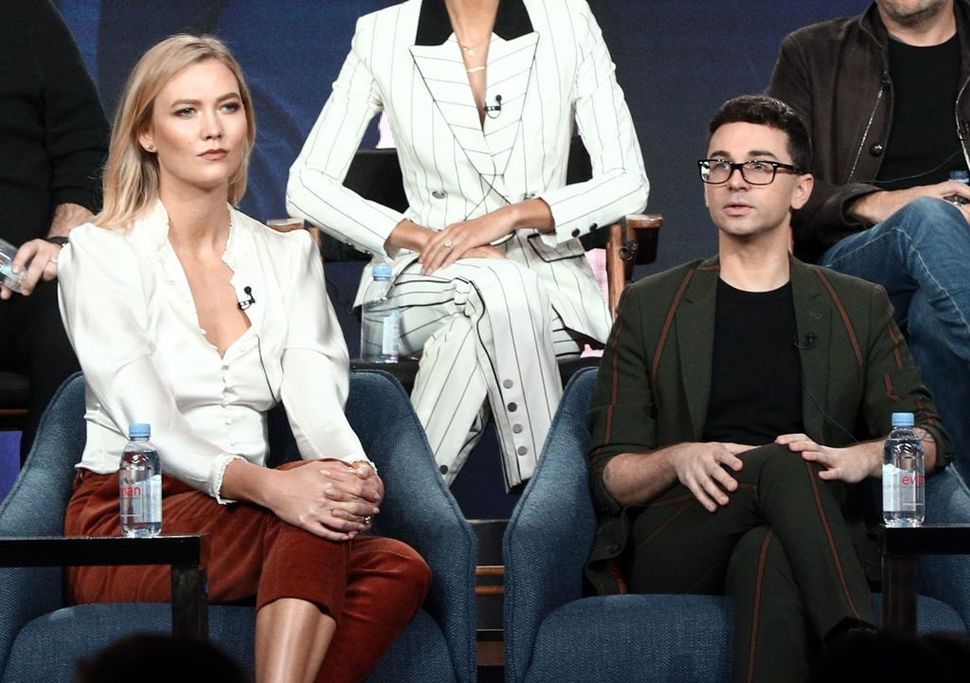 On Thursday, our favorite new member of the tribe Karlie Kloss was called to answer for her political connections on the literal runway. The supermodel-turned-coder, who serves as a judge on the current season of Project Runway, was taken aback when a contestant sardonically asked if she would wear one of his creations to dinner with her in-laws, White House advisors Jared Kushner and Ivanka Trump.

This week’s episode challenged contestants to create an ensemble that Kloss could wear to an upcoming event in Paris. Aspiring designer Tyler Neasloney was already in hot water for the skirt-and-blouse combo he presented: one of the judges had lambasted the outfit, saying that while it might be acceptable “in some place that is neither Paris nor Montauk nor Martha’s Vineyard” (in other words, some place where ordinary people might conceivably live) — it wasn’t fit for Kloss to wear on any occasion.

This sick burn might have leveled the Schmooze, but Neasloney was ready. “Not even to dinner with the Kushners?” he quipped.

one of the #ProjectRunway designers invoked “The Kushners” last night while defending his design and this is the face Karlie Kloss made.

He was then eliminated from the show pic.twitter.com/KefAGTV0v5

Karlie dated Joshua Kushner, scion-in-waiting to the Kushner real estate clan, for six years before marrying him in an intimate ceremony in October 2018. Their relationship reportedly faced intense opposition from Joshua’s family, and Kloss converted to Judaism before her wedding.

While Karlie, Joshua, Jared, and Ivanka share the same well-serumed skin and propensity for private jet travel, the younger Kushners have emerged as a liberal contrast to their White House counterparts. Fans on social media greet their every fashionably progressive gesture — from an Instagram selfie Kloss posted of herself voting for Hillary to Joshua’s decision to attend the first Women’s March while Jared was celebrating his father-in-law’s inauguration — as a symbol of the #resistance, especially spicy because of their proximity to the people being resisted.

But neither member of this power couple likes to resist very openly. Kloss, who is famously private about her marriage and usually declines to comment on her in-laws, came closest to stating open opposition in an interview with British Vogue, when she affirmed her decision “to focus on the values that I share with my husband.”

In a now-viral video clip, Kloss spent a few seconds pursing her lips like a mom who’s disappointed but not angry with whatever you just did. Composure recovered, she returned drag for drag, calling Neasloney’s fabrics “cheap” and his pockets “ill-placed.” Ultimately, she concluded, he “missed the mark on all accounts.”

We have to hand it to her, she has a point: Neasloney’s skirt-and-blouse ensemble was something that an ordinary person might conceivably wear, which means it was altogether too proletarian for Kloss’s Instagram feed.

Neasloney was promptly given the boot from Project Runway, but never fear — his memory will be a blessing in many a meme to come.