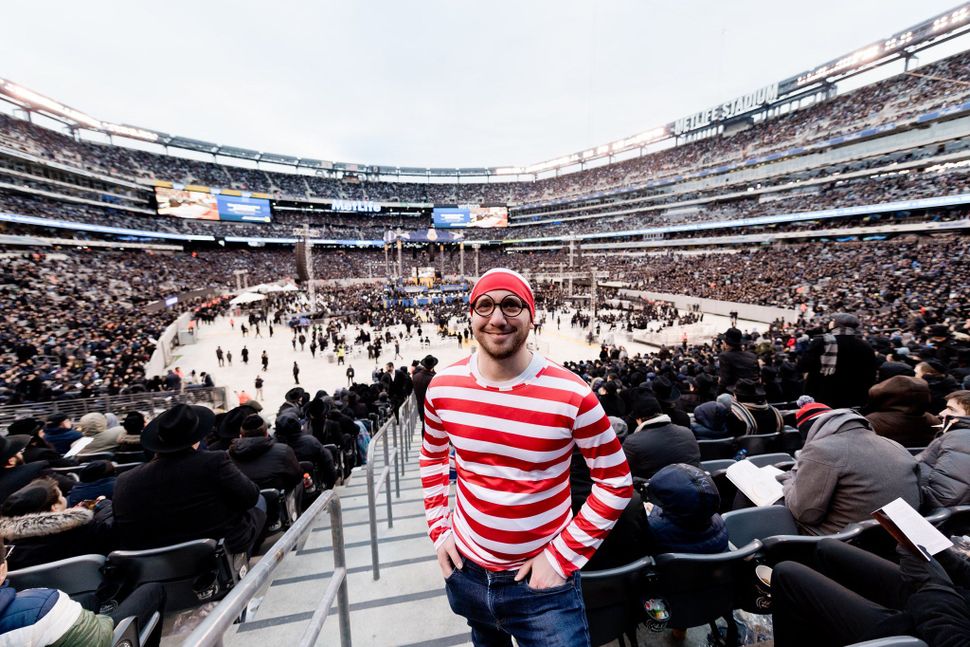 Yonatan Gray poses as Waldo at the Siyum HaShas. Image by courtesy of Yonatan Gray

The Siyum HaShas — a nationwide celebration that ends each cycle of Talmud study — occurs only once every seven and a half years. So when Brooklyn accountant Yonatan Gray had a belated idea for how to celebrate it, he had to wait a long time to put it in action.

At the 2012 Siyum, which took place at New Jersey’s Met Life stadium, Gray looked out at the sea of black-clad attendees and thought about how funny it might be to dress up as the perennially missing children’s book character “Where’s Waldo”. During this year’s Siyum, he did exactly that, donning a red and white striped shirt and cap long enough to snap some photos against the crowd. Not wanting to disrespect the proceedings, Gray took off the costume after a few minutes. But before he even left the stadium, he was inundated with messages from friends who had seen the photo on Twitter alongside captions like, “Waldo does Daf Yomi. So can you.” He had already gone viral.

“My phone was pretty much blowing up,” he said.

On Twitter, pictures appeared of sweatshirts emblazoned with his image and the hashtag #Siyum2020. Gray posted a snapshot of a Siyum attendee in England copying his look. He even appeared as a meme in the Flatbush Jewish Journal, an Orthodox publication.

The taste of instant fame inspired Gray to reprise the costume on a slightly different occasion: the “No Hate No Fear” rally that took place just a few days after the Siyum in protest against the epidemic of anti-Semitic incidents that has swept through New York this fall. His colorful t-shirt wasn’t as noticeable among wide array signs and slogans, but by now he was sufficiently famous that strangers approached him for pictures.

Today we’re ALL marching together to demonstrate our collective outrage and resolve. #NoHateNoFear #StandTogether #JewishandProud pic.twitter.com/ex8fJg5ZWq

On his way home that same day, Gray made the news for a third time — but not the way he would’ve liked. As he was riding on the subway, a woman noticed his yarmulke and began verbally harassing him, shouting anti-Semitic slurs until he eventually left the train.

“Not the reason I wanted to be on TV,” Gray captured a video of the incident on Twitter. The NYPD has since filed the incident as a hate crime.

Not the reason I wanted to be on TV.
News report on the Anti-Semitic harassment I was subjected to on the NYC @MTA subway yesterday. Thank you @AnjaliHemphill for your reporting. pic.twitter.com/mBgVzyuxJz

The costume’s multi-day odyssey across New York (and across Twitter) captured the spirit of this particularly tumultuous moment in American Jewish life, a time when the Jewish community gathers to celebrate beloved texts and protest fiercely against resurgent anti-Semitism in the span of a few days, all while traveling in public with caution.

On social media and in person, strangers have contacted Gray, offering congratulations, condolences, and even overnight accommodations — one admirer told Gray to feel welcome at his house if he ever passes through Vancouver. But Waldo’s most lasting impact may be on Gray’s dating life: Gray said (and the Schmooze has independently confirmed) that since his adventures as Waldo began, his dating “resume” has made the rounds of several WhatsApp group chats in the frum community. Recently, a friend told him it was circulating as far afield as Israel.

One thing’s for sure: If any successful set-up happens in the next few months, it’ll be a great story to tell the kids.

Irene Connelly is an intern at the forward. You can contact her at connelly@forward.com.