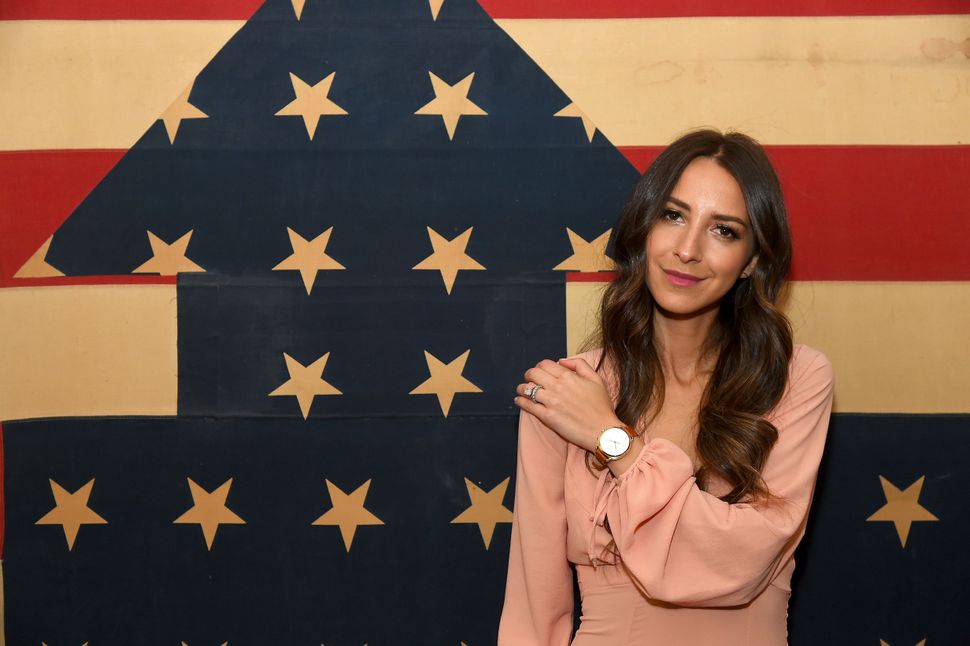 Something Navy Blogger Arielle Charnas attends the Fossil Firsts Dinner Hosted By Something Navy at 33 Greenwich, on May 11, 2017 in New York City. Image by Ben Gabbe/Getty Images for Fossil

Just over a month after tearfully apologizing for her last coronavirus-era transgressions, beleaguered influencer Arielle Charnas is making headlines again — this time for stiffing her florist.

Owner of the clothing line Something Navy, Charnas has racked up over a million Instagram followers by sharing daily outfit selfies, lukewarm TikTok dance routines, and snapshots of her well-dressed daughters cuddling on expensive sofas in her various homes. In April, she became the poster woman for inequality during coronavirus when she pulled strings to get tested for the virus and then broke federal guidelines by traveling to a Hamptons rental with her family.

While some speculated that the episode would ruin her career, Charnas emerged intact after a few tearful apologies and fans forgave, commenting effusively on photos of the private beachfront to which she’d inadvisably traveled.

But on May 25, Southhampton florist Mark Masone went public with accusations that Charnas failed to pay for several Mother’s Day bouquets she’d ordered from his store. In a now-deleted instagram post, he said that several weeks after delivery, the influencer alleged they’d never arrived and cancelled her payment. Masone was adamant that he had in fact fulfilled the orders.

Another AC scandal happening over on Instagram… (her comment’s now deleted, btw)

“Don’t ever lie. You spoke to ME.” pic.twitter.com/bMS6qSiyK3

Charnas was exploiting a small business during the worst economic climate for small businesses in recent history, Masone said. “I work hard for my money and I have a family to feed. I don’t work for free and I am sure Ariel [sic] doesn’t either,” he wrote, adding that “this is disgusting behavior to do [sic] to a business and especially during a pandemic.”

After Charnas commented on the Instagram post, chalking up the nonpayment to a “miscommunication” with her team and offering to speak by phone, a friend of the florist’s quickly clapped back. Monique Wisniewski had been helping Masone fulfill Mother’s Day orders and said she’d personally discussed order delivery dates with Charnas “Actually, you spoke with me…directly,” Wisniewski wrote, calling her “another entitled influencer.”

Charnas’s Instagram presence implies (when it doesn’t explicitly advertise) a lifestyle of lavish and casual expenditure, so it’s a little surprising to see her quibbling over a few flowers — but as Wisniewski pointed out, in the context of influencer culture it shouldn’t be. Personalities with large followings often receive free products and services in exchange for posting about them, an arrangement that allows influencers to cultivate a glamorous, follow-worthy aesthetic even as many aren’t actually that wealthy. It’s all too easy for influencers to feel that their patronage is payment enough. But in this case, Masone didn’t even get a sponsored post in return.

On the other hand, Charnas’ wealth seems to have preceded her social media fame. Her husband, successful real estate developer Brandon Charnas, has been labelled one of “the internet’s most successful Instagram husbands,” by InStyle, and Charnas was posting about her designer footwear long before she became the face of a fashion line.

Maybe Charnas was feeling the financial pressure of both maintaining an indefinitely quarantine pad and splashing out for Mother’s Day. Maybe she has the money and really doesn’t know or care how the other half lives. Either way, the episode is a reminder of a reality that’s become especially clear since the pandemic’s onset: the lives of influencers are never really what they seem.