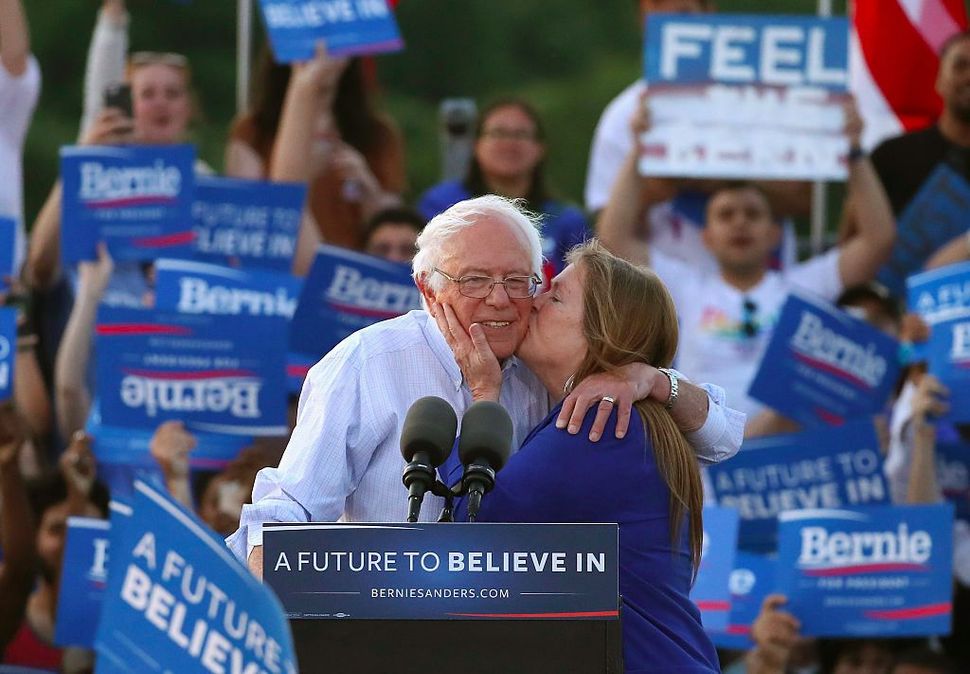 Bernie Sanders and Jane O’Meara Sanders at a 2016 campaign rally. Image by Getty

In the first two nights of the Democratic convention, organizers have mustered all their resources to create what seems impossible: a virtual political gathering that doesn’t immediately bore all viewers to sleep. But even amid heavy-hitting speeches, soaring roll calls, and inexplicable musical numbers, one unexpected highlight emerged: candid footage of an elderly Jewish man “bickering” with his wife.

That footage came to us late Monday night via a video that showed Jane O’Meara Sanders fussing over her 78-year-old husband as he prepared to address the convention in front of a now-infamous stack of chopped wood.

I need a little Jane Sanders in my life. Before I do anything, my last words are “remind me to stand up straight.” https://t.co/VKBMGEMFVa

She brushed dust off his jacket. She critiqued the positioning of his hands on the podium. She joked that “I’m going to give the speech.”

It was a lighthearted moment that confirmed the Schmooze’s suspicions that the politicians who decide the future of our nation literally cannot get dressed without spousal assistance. But the scene was also tense — Bernie was preparing to go live, and there’s plenty to fret about when one’s presidential ambitions have curdled into an endorsement of one’s former opponent during an election season fraught like no other.

So it’s understandable that when Jane stepped away from the podium and reminded Bernie to “stand up straight,” he snapped “Stop it!” while hunching over even more and flapping his hand derisively, a gesture common among Jewish grandpas who are too polite to tell their wives to shut up but nevertheless wish they would.

The unscripted quarrel was touchingly human, providing further evidence that Sanders is actually Larry David and giving viewers a glimpse of the unaffected atmosphere that a political couple devoid of polished political manners might have brought to the White House. Even Jill Biden got on board, tweeting that she was “grateful” for the pair.

But when the Schmooze saw many on social media concluding that Bernie’s sniping was a gesture of “love” for Jane, we were, as the saying goes, disappointed but not surprised.

The way Bernie loves Jane….literally the most pure love idc how you feel about this man. pic.twitter.com/qdhxBVQDOY

What a sweet, normal and genuine man Bernie is. I legit teared up watching this… Also Jane Sanders is a joy ❤️❤️❤️

Was snapping at the spouse who has worked on his campaigns and administrations since the literal 1980s a gesture of love? There may be five languages, but I’m pretty sure that shutting down the woman trying to prevent you from looking like a garden gnome in front of the American public is not one of them. It seems unlikely that even those gushing over the Sanders love story on Twitter would like to be on the receiving end of such hand flaps. While entirely forgivable in the heat of the moment, it was a lapse in manners for which (the Schmooze hopes) Bernie compensates by demonstrating his love in other ways, like doing the laundry or fighting for her right to government-sponsored healthcare.

The person demonstrating love here — for her husband and for the movement she helped him create — was Jane. Let’s not forget it.