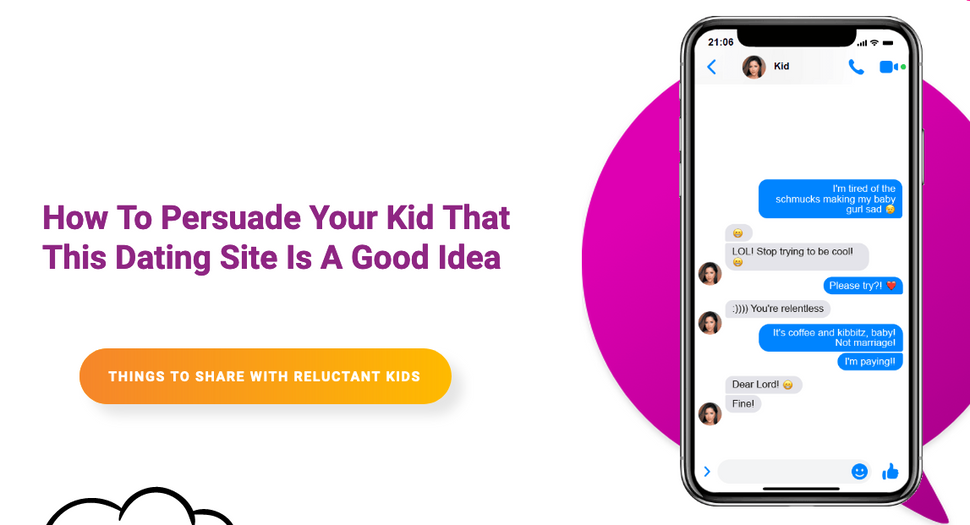 Just hear them out! Image by JustKibbitz

In 2013, a millennial Jewish nightmare came true for Jeffrey Kaplan: he discovered his mother was posing as his younger brother on JDate in hopes of setting him up with a nice Jewish girl.

That’s called catfishing, and it’s a fundamental no-no of the online dating world. But to Kaplan, an entrepreneur based in Asheville, N.C., it was also an example of an “unarticulated need,” an economic term that describes a consumer’s desire for a product that doesn’t yet exist. What his mother needed was a forum in which she could act the yenta without having to literally masquerade as her son.

A few years later, like a nice Jewish boy should, he’s about to fulfil that wish with the launch of JustKibbitz, a dating app, set to launch later this fall, that lets Jewish moms make matches for their kids.

“We’re putting your mom in the driver’s seat,” said Jeffrey Kaplan. What could go wrong?

Here’s how JustKibbitz will work. Moms (or dads) eager to fast-track the arrival of grandchildren will subscribe to the app in order to create profiles, message with other parents, and eventually choose a time and place for their consenting offspring to meet.

It’s easy to see JustKibbitz’s appeal to moms, less so to envision a widespread availability of consenting offspring. (The app’s landing page features a blog post entitled “How to persuade your kid that this dating site is a good idea.”) Kaplan and his team thought of that: when they surveyed 100 millennials about their willingness to embark on a mom-arranged date, only half agreed. But when asked how they felt about a mom-bankrolled date, 92% were interested.

So Kaplan made prepaid dates one of JustKibbitz’s core features. Through the app, parents can provide potential couples with gift cards to Starbucks, local bars, or even movie theaters. But to unlock the funds, they’ll have to complete an icebreaker activity, whether it’s answering trivia questions about each other or playing a quick game of tic tac toe.

“I see [the redeemable date] as something that almost reduces the inhibitions,” Kaplan said, which is a tactful way of pointing out that we as a generation will do anything for a free venti frappe.

Just Kibbitz is not the first app to unleash Jewish moms on the matchmaking world, or to mix online dating with offline relationships. A dating website called JMom, which operated from 2010 to 2015, allowed moms to schmooze on behalf of their kids. More recently, on dating groups that formed on Facebook during the pandemic, millennial and Gen Z Jews circulated informal dating “resumes” on behalf of single friends. And, of course, the app borrows from a practice even older: the shidduch system, common in Haredi communities, in which professional matchmakers introduce single Jews.

Kaplan hopes that capturing a niche market of Jewish moms will help distinguish JustKibbitz from the crowd. But he also sees its structure as a way to counter the less savory aspects of online dating, like the fact that over 50% of female dating app users receive unsolicited nude pictures. Some apps are taking steps to address harassment: in 2019, Bumble introduced an algorithm that recognizes and blurs explicit images. But Kaplan has a simpler solution. “By introducing the oldest form of accountability — your parents — we can eliminate [nude photos],” he said.

About 500 parents have joined JustKibbitz’s waiting list so far, and Kaplan said the app will launch once it meets a “critical mass” of interested subscribers.

It’s easy to be skeptical of the idea that a traditionalist approach will remove all stumbling blocks in the path from single status to holy matrimony: After all, young people stopped letting their parents set them up because it doesn’t always work out so well. But the whole worldwide pandemic thing is compelling us to try new things and ask ourselves new questions, like Who is better equipped to decide whether a stranger is worthy of mixing their genes with mine, me or my mom? or Do I want free Starbucks this weekend? If those are the dilemmas that have been puzzling you, there’s no better time to solve them than now.