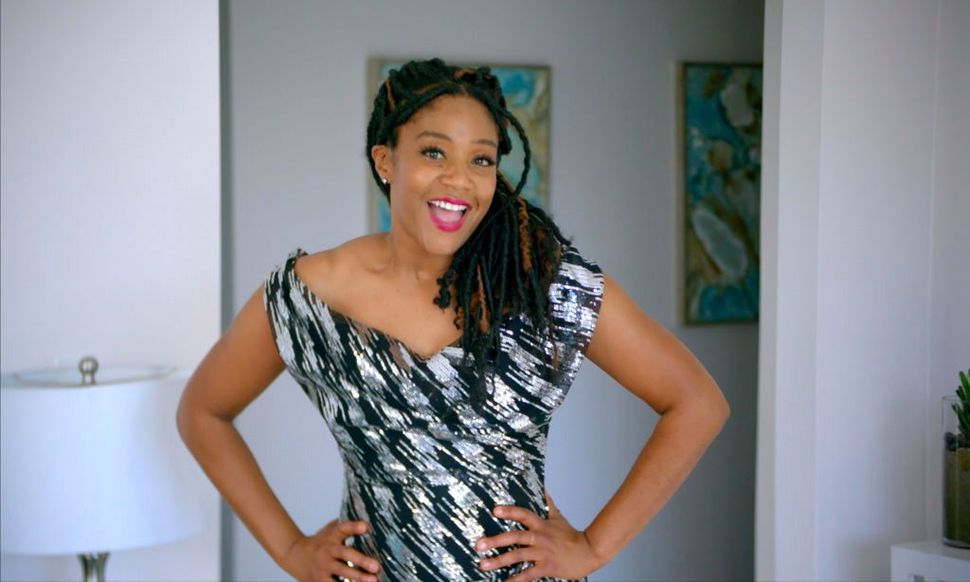 Haddish appeared in a Magen David necklace…and nothing else. Image by Getty Images

Tiffany Haddish just made a voting PSA wearing a Magen David necklace…and nothing else.

The Jewish comedian was part of a gaggle of celebrities who got naked for a get-out-the-vote video about the “naked ballots” rule in Pennsylvania, a new voting restriction that could potentially disenfranchise thousands of voters.

Celebs including @SarahKSilverman, @TiffanyHaddish, and @chrisrock are stripping down to bring attention to naked ballots and encourage voters to follow vote-by-mail instructions (via @representus) pic.twitter.com/VMr3LVY2C7

Pennsylvanians who vote by mail receive not one but two envelopes with their ballots; the second, a secrecy “sleeve,” is meant to protect their identifying information. Secrecy sleeves aren’t new, and many states use them as part of the absentee voting process. But after the Trump campaign and the Republican National Committee challenged the acceptance of naked ballots in a lawsuit, a Pennsylvania court ruled in late September that voters must use the secrecy sleeves — and “naked ballots” that arrive in only one envelope will be thrown out.

Given that the ruling arrived so soon before the election, there’s a good chance many voters won’t learn of the new and non-intuitive restriction in time to cast a valid ballot. That’s probably why Represent Us, the anti-corruption non-profit that sponsored the video, turned to shock value to get the word out.

Besides Haddish, several other notable Jews stripped down to instruct voters how to send a fully clothed ballot. Amy Schumer beamed in from an extremely wholesome cabin. Josh Gad loudly announced “I’m naked” while baring perhaps part of one shoulder. Chelsea Handler played fast and loose with her camera’s downward angle. (Given her habit of posting semi-nude screeds about anti-maskers on Facebook, this should surprise absolutely no one.) Not one to pass up the chance of doing something mildly shocking, Sarah Silverman bared her entire (blurred) torso. So did her father, who apparently goes by the nickname “Schleppy.” The Schmooze has to wonder if he knew what he was signing up for.

Even Borat, the brainchild of Jewish prankster Sacha Baron Cohen, made an appearance. As fictional characters go, he’s one of the least likely to support free and fair elections. So it made sense that he wore a full suit, bragged about his genitalia and said absolutely nothing about voting.

Will the PSA work? There’s a lot on the line: Pennsylvania is one of the most important swing states in the upcoming election. So it makes sense for voting rights groups to employ every possible strategy to guide people through the bureaucratic minefield that is exercising the suffrage in 2020.

Is it also an unrepentant three minutes of celebrity virtue-signaling? Absolutely. Time and again as the pandemic rages and political instability mounts, celebrities have demonstrated an enduring conviction that their mere appearance on camera will catalyze meaningful social change. Double points for sporting a mildly subversive accessory, as Karlie Kloss did when she posed in a pair of $700 boots emblazoned with the word “vote.” With its collection of earnest cameos, the PSA evoked the OG manifestation of this unfortunate trend: Gal Gadot’s ensemble “Imagine” video, in which a handful of stars graced the weary American public with a slapdash John Lennon cover recorded from within their mega-mansions.

The Schmooze would like to know if the celebrities involved in this undertaking supplemented their appearance with a generous donation to one of the many groups fighting voter suppression. Because in the end, America probably needs well-funded independent watchdogs more than it needs a topless Sarah Silverman saying “America needs you!”