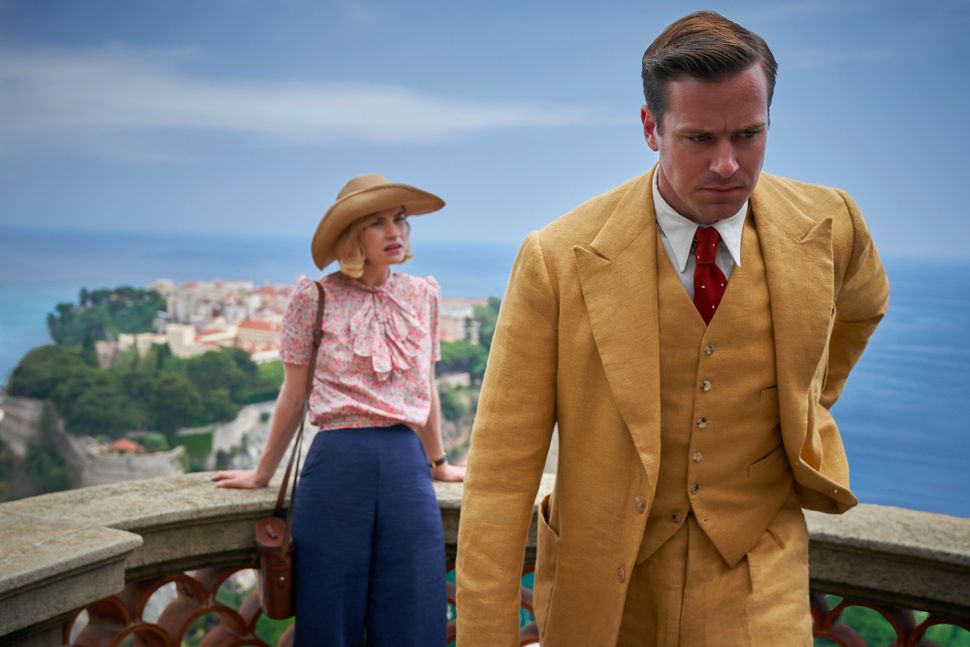 Seriously, what is going on here? Image by Netflix

Last night the Schmooze went to Manderley again … and it was a huge bummer.

Before it even debuted, the Netflix reboot of Daphne du Maurier’s “Rebecca” was slated to go wrong in a lot of ways. A 1938 Gothic thriller with strong “Jane Eyre” vibes, the novel follows a naive 20-something narrator who marries moody widower Maxim de Winter and repairs to Manderley, his drool-worthy Tudor-era track mansion, only to find out that his first wife died in less-than-savory circumstances. It’s basically high-quality fanfiction for people who spent college writing essays about subtextual sexuality in Victorian literature, and it’s already been the subject of an unimpeachable 1940 Hitchcock adaptation starring Laurence Olivier and Joan Fontaine. Directed by Ben Wheatley, the 2020 remake brought color and a lot of cars to the table; but as soon as we saw the trailer, a Baz Luhrman-style perfume ad that paired nebulously midcentury interiors with a pop soundtrack, we knew it wouldn’t compete.

Still, we had hopes for the one member of the tribe among the cast: Armie Hammer, best known for playing emotionally available Jewish hotties in “Call Me By Your Name” and “On the Basis of Sex,” playing Maxim de Winter. With the looks of a WASP princeling and the fighting Twitter spirit of your most Jewish uncle, Hammer seemed like a good pick for a character who exudes equal parts repressed British sex appeal and serious relationship red flags.

And there’s a delicious irony in the prospect of a Jew taking center stage in a story that serves as a sort of 20th-century coda to the Victorian era, which was not a particularly fun time for Jews in literature. (Du Maurier’s grandfather George du Maurier, a fellow novelist, invented Svengali, a caricaturish Jewish hypnotist whose name has since become shorthand for controlling, devious behavior.) Manderley’s real-life equivalents wouldn’t likely have been welcoming to Jews, so it’s fun to see a Jew — especially one whose ancestors include an espionage-prone oil baron and a founder of the American Communist Labor Party — take charge of the fictional estate. Not to mention the fact that the character he plays is obsessed, to his detriment, with the purity of his own bloodline: of the possibility of bequeathing Manderley to his sister’s sons, Maxim remarks that, while they boys are nice, “they’re just not de Winters.”

We would have loved to see Hammer reinvent Maxim for the modern day: While figured sympathetically in the novel and the Hitchcock adaptation as a tortured hero, he’s also a dangerously entitled petty tyrant whose temper flares whenever he realizes he can’t dominate the women around him. Hammer is no stranger to imperious, well-heeled characters — he did, after all, play a Winklevoss twin — and we know he could have done it.

Instead, more than anyone else, Hammer portrayed Laurence Olivier.

Just as the screenplay painstakingly retraced Hitchcock’s steps, Hammer replicated Olivier’s mannerisms, down to the rapid-fire line delivery and angry about-faces every time his first wife is mentioned. Those gestures seem logical in a classic film but, in 2020, read as manically unappealing. In the words of one member of my Netflix watch party: “Get out, girl.”

And while the one thing Hammer should have going for him is relentless sex appeal, the film strips that away too. Hammer is several years younger than the man he’s supposed to portray, an inconsistency the film crew resolved by outfitting him with a Colonel Mustard suit and an incel’s crewcut. The film’s ability to make Hammer less than indisputably sexy was one of the only surprising turns of this so-called thriller, but it also undermines one of the story’s key premises: the idea that Maxim’s wife is sufficiently wowed in bed to overlook the increasing evidence that he’s both a felon and an incredibly wet blanket.

Hammer’s poor showing as Maxim is probably a function of the broader movie’s flaws, not his own acting prowess. The next time a media conglomerate dumps several million dollars into a “Rebecca” remake, we hope they find someone better to helm it (ideally, an English major who has completed at least four single-sitting readings of the novel) and give him the second try he deserves.

In the meantime, we’re holding our breath for “Find Me,” when Hammer will return to the theatrical territory he knows better than any other: gentle Jewish lovers.