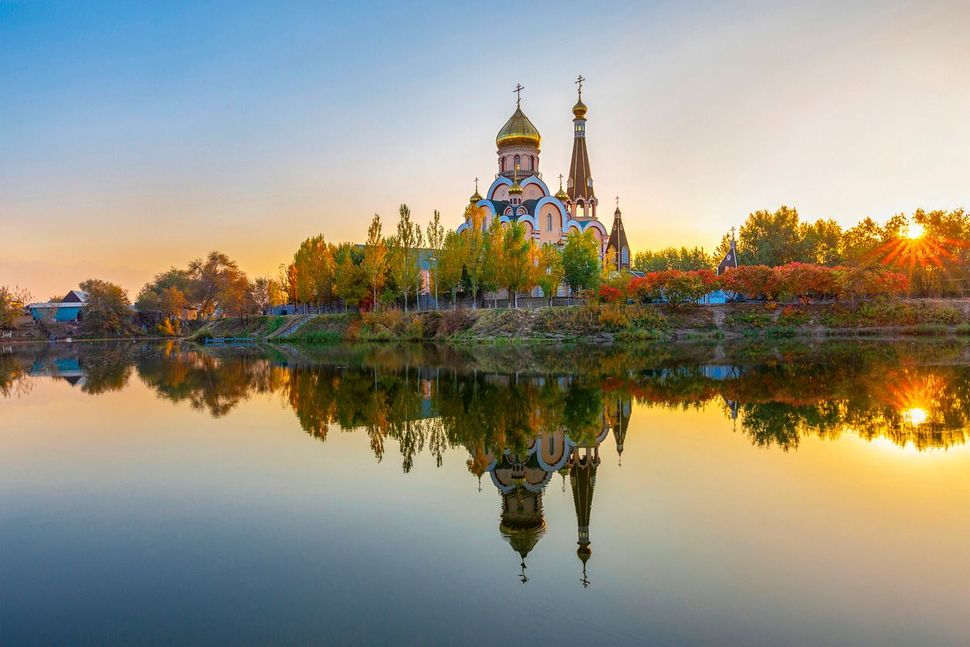 The Church of the Exaltation of the Holy Cross in Almaty, Kazakhstan — not the kind of thing you see in “Borat.” Image by iStock

Fourteen years ago, “Borat: Cultural Learnings of America for Make Benefit Glorious Nation of Kazakhstan” made a misogynistic, antisemitic and entirely backward version of its titular nation infamous. In response, the Kazakh government banned the film and threatened to sue its creator, Sacha Baron Cohen.

Now, as the long-awaited “Borat” sequel beams into American homes, Kazakhstan is folding the franchise into a tourism campaign.

On Sunday, Kazakhstan’s national board of tourism rolled out a quartet of 12-second ad spots featuring Borat’s only fit-for-print catchphrase: “Very nice.”

Where “Borat” features muddy villages and women in cages, the marketing campaign features a wholesome tourist taking selfies atop snow-capped mountains. The scenery? “Very nice,” in his opinion. Instead of the horse urine Borat claims his countrymen drink, a visitor sips from a bowl of traditionally fermented horse milk. Also, “very nice.” In another, a woman wanders through a futuristic city district.

The ads come to us courtesy of Dennis Keen, an American transplant who runs a tour company in Almaty, Kazakhstan’s largest city. Ahead of the sequel’s release, he had a wild idea: rather than threatening legal action or maintaining a frosty silence, Kazakhstan should get in on the joke. With a Kazakh friend, Yermek Utemissov, Keen produced the suite of ads pro-bono.

“I just had a baby,” Keen told the New York Times. “When he grows up, I don’t want him to be ashamed of Borat.”

Kairat Sadvakassov, deputy chairman of the country’s tourism board, said the phrase encapsulates everything “Borat” gets wrong about Kazakhstan, from its cuisine to its welcoming people. In a statement to the Huffington Post, he invited viewers to visit Kazakhstan “in 2021 and beyond, so that they can see that Borat’s homeland is nicer than they may have heard.”

As the Forward has noted, Baron Cohen has not done well by the nation he chose for his most iconic character’s home. While Borat’s casual antisemitism draws out unsavory tendencies in the Americans he encounters, Kazakhstan in fact served as a haven for Jewish refugees fleeing the Holocaust. In the opening scenes of “Borat 2,” the titular character mentions “Holocaust Remembrance Day, where we commemorate our heroic soldiers who ran the camps.” But Kazakh soldiers were not actually involved in Nazi concentration camps — and to imply that they were, our reviewer argued, is “the sort of distortion that Baron Cohen, in his out-of-character capacity, denounces.”

So it’s fitting to see the franchise redound, at long last, to Kazakhstan’s benefit — and for Baron Cohen, in a statement to the New York Times, to acknowledge that the nation he portrays on-screen has little basis in fact. “The real Kazakhstan is a beautiful country with a modern, proud society — the opposite of Borat’s version,” he said.