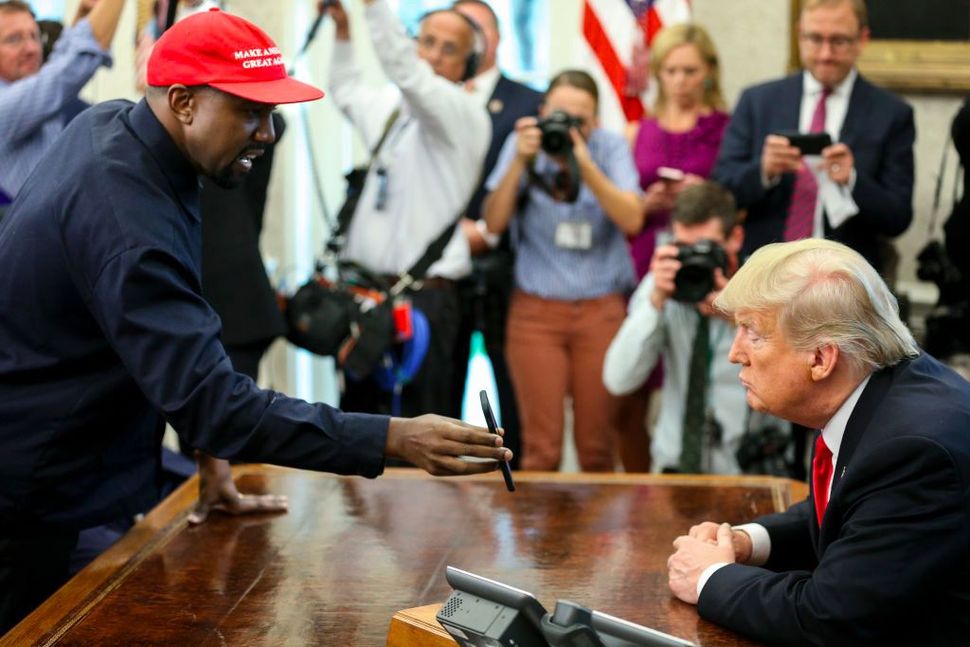 Kanye West and Donald Trump at a White House meeting in 2018. Image by Getty

In August, just a month after announcing he was “walking” for president, rapper Kanye West met with Trump family scion-in-law Kushner in Colorado. The purpose of the meeting was unknown: Kanye later tweeted that the two had discussed “Powernomics,” a book by Claud Anderson on Black economic empowerment, but provided no more substantive information. Combined with revelations that Republian operatives helped get Kanye’s name on the ballot, the timing led to speculation (never confirmed) that Kanye was acting as a spoiler for the Trump campaign, entering the race to peel off Democratic votes in key states.

This week, any such hopes turned to dust. While the presidential race is still too close to call, and protracted legal battles look likely in some states, Kanye conceded his campaign in typical fashion: “WELP KANYE 2024,” he said in a since-deleted tweet on Tuesday evening, just as election workers began reporting returns. (Unfortunately, this was not even the strangest tweet posted by a presidential candidate this week.)

In the 12 states where Kanye’s name appeared on the ballot, the rapper accrued less than 0.5% of the vote. That looks like a small figure, viewed in numbers the turnout seems (slightly) more significant: in total, he racked up 60,000 votes. Frankly, that’s a large number of people signing up to be governed by a candidate who made one very chaotic campaign appearance clad in a bulletproof vest.

With the election so close, a few thousand votes could potentially make a difference. But Kanye didn’t sway the balance in any swing states. He racked up the most votes in Tennessee, where he received 10,216 votes. Proportionally, he did best in Oklahoma, Idaho, and Utah, with 0.4% of the vote. All four are deep red states that Trump won handily.

Even before his August meeting with Kushner, Kanye had long-standing ties to the Trump camp. He met with Trump just after the 2016 election and again in 2018, to discuss criminal justice reform and mental health in a highly-publicized Oval Office meeting. Though he didn’t vote in 2016, he’s said he would have chosen Trump over Hillary Clinton. “We are both dragon energy. He is my brother,” he has said of the president.

Their bromance is notable in large part because of Trump’s unpopularity among celebrities. There are some notable exceptions: Kid Rock is a vocal Trump supporter, Kirstie Alley has spent the past few days tweeting improbable claims of election fraud, and Ice Cube has worked with the White House to promote an economic uplift strategy he designed, the “Plan For Black America.” But this is a paltry showing compared to the panoply of celebrities pulling out all the stops to support the Biden-Harris campaign.

Third-party challenges may be off the table (at least until 2024), but both Kanye and Kushner will have plenty to occupy them. The rapper can return to attending the indoor gatherings members of his family are regularly hosting. As for Kushner, it looks like he’s pretty busy evicting hundreds of families from his properties.