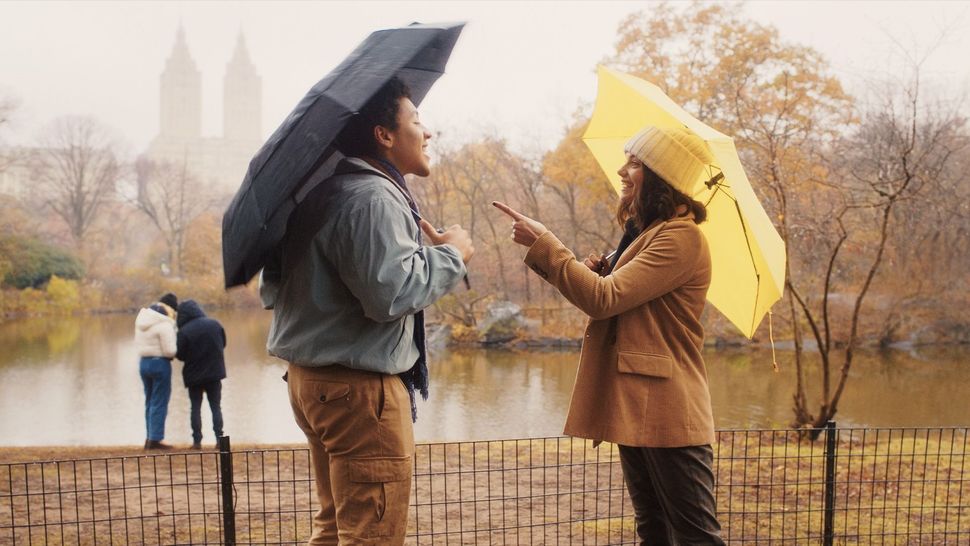 It’s fall when brunch-prone, commitment-shy New Yorkers Milo (Jaboukie Young-White) and Wendy (Francesca Reale) meet on a dating app called “Meet Cute.” It’s fall when, after a sidewalk makeout session among stacks of garbage (by far the film’s most realistic detail), the two embark on a literally contractual “Best Friends With Benefits” arrangement, which allows both of them to enjoy “consistent sex” without enduring the “hell” of having any obligations to each other. It’s fall when Milo “catches feelings” and confesses them to an unmoved Wendy, and it’s fall-pushing-winter when Wendy decides she’s done with swiping and ready for partnered bliss after all.

If you’re envisioning an hour-and-thirty-two-minute tribute to the slightly subtler autumnal mood of “You’ve Got Mail,” you’d be right; in more ways than its weather, director Jonah Feingold’s debut feature is positioning itself as the heir to Nora Ephron’s New York.

If a tête-à-tête is happening, it’s definitely happening outside Central Park’s Loeb Boathouse, much like the infamous brunch cabal in “When Harry Met Sally” that shaped my (and probably every other millennial’s) misguided notions of young adulthood in New York. The soundtrack toggles between soft and slightly suspenseful jazz. Everyone lives in a doorman building, and no one wears the same coat twice. None of the women pass the Bechdel test — but it’s hard to accuse the film of sexism when every character talks exclusively about the mechanics of online dating. 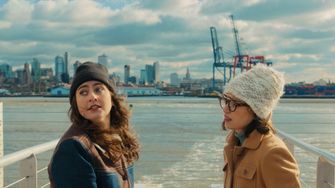 It continues to be fall. Image by IFC films

Ephron excelled at odes to a New York City that never quite existed, and “Dating and New York” is most charming when it gives us a 21st-century taste of her aesthetic. But while Ephron’s fantasy city is populated by people who seem at least potentially real, the characters in this film seem more like robots programmed to spout millennial dating buzzwords.

Social media is a constant theme in the tech-heavy tale, with feeds and direct messages floating clunkily across the screen as the characters engage in prolonged debates about online etiquette — the best way to ghost a bad date, for example, or respond to an ex who won’t stop viewing your Instagram stories. The ubiquitous “finance guys” haunting the online dating scene come to life in the form of a very annoying tech bro played by Alex Moffat of “Saturday Night Live.” (To his credit, he’s also the only character we ever see working for a living.)

While desperate to land in a conventionally monogamous relationship, they participate with relish in the most transactional aspect of online dating, as eager to ghost as they are momentarily piqued to be ghosted. Though Feingold, who wrote the film as well as directing it, is himself a millennial, the script feels like it was written by someone who came of age in Ephron’s era and has encountered millennials only through angry think-pieces about their avocado-toast-consuming, diamond-industry-destroying, home-ownership-eschewing habits.

Though the bantering brunches in “Dating and New York” don’t resemble any actual dates I’ve ever gone on, the film reminded me of the stories we millennials often tell ourselves about modern dating — stories of bravado and callousness, stories to make jokes out of the real connections and petty cruelties that dating apps offer in equal measure. Stories to paper over the fact that becoming romantically linked to another human being is a genuinely scary experience, no matter how we gamify it.

I’m not spoiling anything to tell you that Milo and Wendy get their happily-ever-after in the end. But those stories, told without any allusion to the messier truths that underpin them, make for surprisingly grim viewing.