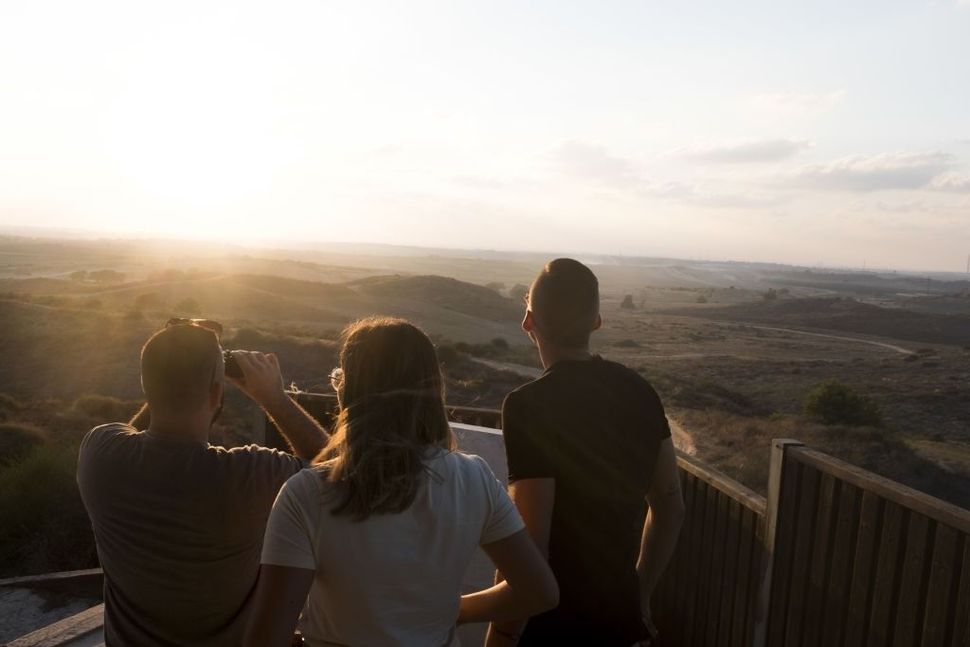 Israelis look over the Gaza strip from a hill on July 21, 2018 next to Sderot, Israel. Image by Getty Images

It’s jarring, frustrating and fruitless the way people determine that all things are either black or white, good or bad, right or wrong.

Nearly everyone, it seems, has a side, a cause, an oppressor and a victim. And if you don’t agree — completely — not only are you wrong, but you are also one of “them.”

Few things show the fallacy of this thinking more than the rhetoric around Israel.

Over the past few weeks, Jewish kids have walked off Birthright trips, encouraged by left-wing organizations. And everyone takes a side.

They are entitled brats, stealing a free trip, then begging for funds to get back home —

or they are brave warriors, and we should finance their travels.

Idiots on social media, in continents far, far away, try to justify sending balloons with explosives to parks and school grounds.

Their land isn’t just Gaza the whole thing belongs to Palestinians, you keep demolishing their villages and homes and then steal their lands settlements keeps growing and growing on Palestinian lands you keep slaughtering them on regular basis enough is enough

Yet, as rockets rain down on terrified citizens:

As the police have to make videos to tell kids not to touch explosive-laden balloons that are landing in their parks:

Israel’s Police has released this video to warn children not to warn the explosive kites coming from Gaza. It’s like a Stephen King movie. pic.twitter.com/YSZuAfeXj1

As birds are strung up with incendiary devices, and acres upon acres of crops, fields and forests are burnt to the ground:

WT actual F!#$%!
Palestinians sent a bird (Kestrel) with an incendiary device hanging from a harness the Kestrel was put it over to Israel to arson the countryside?
Israel Nature and Parks Authority says bird (and wires) found after a fire broke out in Habesor National Park. pic.twitter.com/5zoM2ndQwM

In unprecedented acts of terror, Hamas has launched arson kites and incendiary balloons, which have burned more than 7,400 acres of Israeli land

“All the glass in the living room flew toward us, the whole house was filled with smoke, there was blood everywhere, shouting and madness. The neighbors called emergency services I had shrapnel in my face and legs, my wife and daughter had in their heads.” https://t.co/hReWiwmVOS pic.twitter.com/3Ms6fRtLMe

As two teens tragically die in Gaza in a strike against Hamas infrastructure:

And as people tear apart the words of Alexandria Ocasio-Cortez, a New York Democratic candidate for Congress:

Do you know what else is happening?

Jewish teens — mine included — are digging up Byzantine ruins side by side with Arabs and Bedouins.

Jewish orthodox, Muslim family, Christian nuns, walking in #JerusalemIstheCapitalofIsrael. I am looking for such a picture in another Middle East country. pic.twitter.com/toorI8yGr7

Arabs and Jews save lives together in an organization run by religious Jews.

Arab Israelis, Druze and Ethiopians all serve together in the army and police force.

In the Army of the Apartheid State. Second left is Yahya Mahamid, a muslim Arab soldier who has just completed his basic training with an IDF combat unit. I am proud to count him as a friend. pic.twitter.com/Tx376CNzIq

Palestinians donate to build a synagogue in honor of a Jewish victim of terror.

Palestinians donate to build synagogue in memory of Israeli Reuven Schmerling, after he was stabbed to death by Palestinian terrorists. “What they did to him is horrific. If more people were like Reuven, peace would have been achieved long ago,” said one. https://t.co/GdH7OW5of8

Nothing is black and white.

Nothing is as simple as the social justice warriors want you to believe.

But they try. Because thinking is hard. Nuance is tough and it means you might need to consider, to analyze and to see that everyone has a story — and that everyone’s story needs to be heard.

So go, learn, ask! But also listen. And if anyone tells you that the story is simple — that there is a black-and-white way to see it — move on. You will learn nothing there but hate, and you will help no one but the haters.

There are people who approach the conflict with the belief that both people deserve rights and dignity, and work toward that goal.

If you’re interested, let me know. It would be my honor to add you to that list.