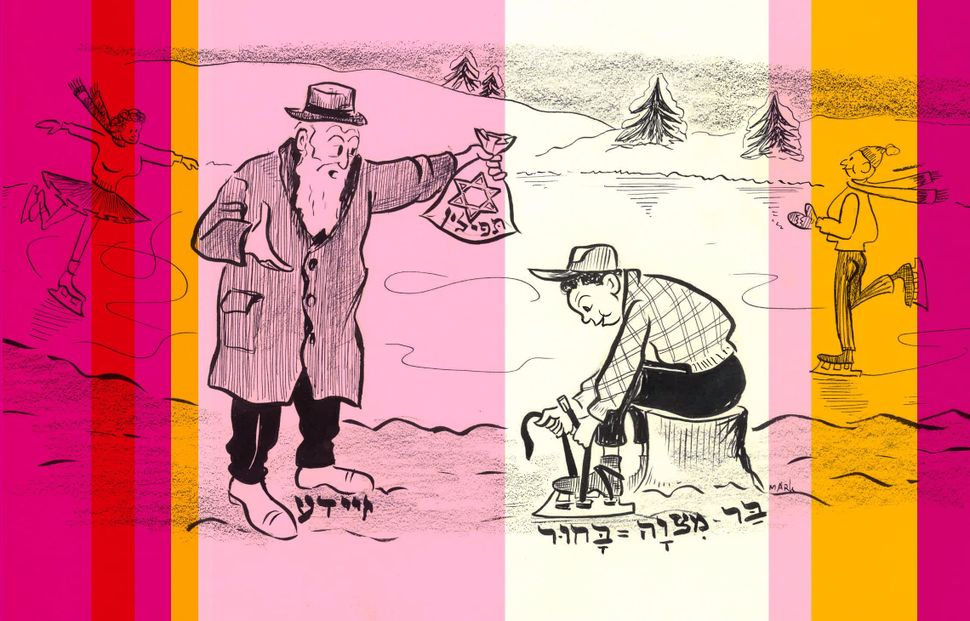 Born in 1885 in Rakow in the Minsk region of Belarus to a family of carpenters, Berl Botwinick, the author of this essay, was the winner of the Forverts’ 1909 story contest, with a piece about Jewish American life entitled “Shabes Morning.” By 1913, Botwinick was a full time employee. He published stories, novels and feature articles. He edited much of the paper, including the theater section and was responsible for replying to readers’ queries in the Forverts’ beloved Bintl Brief section.

Also known by his pseudonym “Lead Pencil,” Botwinick joined up with the revolutionary Jewish intelligentsia when he was 16, as an active member of the Bund. He was arrested for distributing illegal literature, and imprisoned in 1903. Under the name Berl The Artist, he was active while in prison in Minsk and arrived in America two years later, in 1905, Botwinick published parts of a drama in progress entitled “Jesus Christos” and a short story anthology. An anthology of Botwinick’s short stories in translation was published in Detroit in 1984 with an introduction by his grandson, the translator and former Dean of English at Columbia College in Chicago, Phillip Klukoff. Botwinick died in 1949.

A relative from Brooklyn’s Brownsville sent me an invitation to his daughter’s bar mitzvah on Shavuot at the Brownsville Temple. Despite being a true kosher Litvak, my relative has a weakness for Jewy ceremonies that draw him to synagogue even though he is not the observant type.

I dislike American bar mitzvah ceremonies. A bar mitzvah in America is like a wedding combined with a staged theatrical production. The ceremony is huge, and the married couple never truly have a moment as man and wife. The middle-class American Jewish bar mitzvah ritual is typically a big shebang, and the bar mitzvah boy never leads prayers or wears phylacteries.

But when I received an invitation to a bar mitzvah for a girl, I decided to attend. A girl becoming a bar mitzvah, with tefillin, was a real curiosity and not something I’d ever seen. Well, America’s got a whole new Torah and set of ideas. Girls will be bar mitzvahed because the boys haven’t got time for it. The guys are “busy” playing ball and walking their dogs.

So I went off to synagogue on Shavuot to the beautiful Brownsville Temple that was truly magnificently designed with flower vases lining the walls and Torah ark. The exteriors were great, but in the synagogue’s interior lay an uninspired suffocated heart that made it hard to even draw a breath in there. It was a tragi-comedy, partly trashy yet somewhat literary. Half-fish and half-fowl, part Jew and part German with no self-awareness whatsoever. There I met beard-free learned Jews and bewhiskered scoffers. The cantor sang traditional melodies just like our old town one, but with a better voice, and the rabbi delivered a “speech” in English. He looked just like one of the study-hall boys back home whom we used to invite for a home-cooked meal on Wednesdays, and sounded like a Protestant vicar.

The Torah chanter read in the old style, and the choral sopranos responded “Amen” like gentiles. English language prayer books featuring a program guide for the service lined the pews, just like in a theater. The elder Jews arrived with their own traditional siddurim. The gentile-sounding choir sang the prayers with much fervor scored to the Italian opera “La Traviata.”

By the ark, where the cantor prayed so earnestly, gold and silver glistened along with the Torah scrolls; everything was filled with religious ardor. In the synagogue itself there were no devout feelings at all. There was clowning, the grooming of moustaches, and women adjusting their bobs and hair pins. Only the older women, bubbes and the in-laws of the newly middle-class alrightniks mumbled prayers of supplication, shaking their heads and sighing “Oy vey iz mir” as the rabbi spoke in his vicarlike English.

I’m not religious but I’ve always craved the feeling. Sometime I’d like to see a synagogue filled with Jews who believe what they’re praying. Just once I’d like to be absorbed within the pure and worshipful who’ve been promised the sublime world to come. I wasn’t feeling it at that Brownsville Temple. There wasn’t even a crumb of spiritual poetry there for me to find.

But wait! Then came the bar mitzvah celebrants. Twenty of them became a bar mitzvah, in a service known as “confirmation,” same as the gentile one. As natural as it is for the gentiles, same as they’ve done for generations. Out of the group of 20, only six were boys. The remaining 14 were girls. All 20 of them gave speeches, which naturally, were in English. The girls all had thin, tender little voices as they spoke, saying sweet things. They believe in their parents, the Torah and the Jewish people. And the Jews, many of them landlords and manufacturers, sat there beside themselves with joy in the knowledge that there’s never been anyone better.

What need do the Brownsville Temple Jews have for empathy toward the poor and ill? Why do they need to be pressed into donating for new hospitals, barely subsisting without funds, filled to the brim with the sick? What won’t they get out of their own tenants and workers?

For a few bucks they hire a Hebrew tutor who teaches the 20 kids to praise and bless and talk them up and tell them they’re the best the world over. God is truly in this synagogue, hearing those praises, so there’s no need for paupers, is there?

And that’s how the Temple wealthy are fed compliments. And that’s how the boys and girls spoke — like tender young canaries confidently with God on their side. At which point it was time for the young rabbi to speak, though the bubbes and in-laws couldn’t understand him. The old women knew, though, from practice, when the right time was for sighing. The rabbi said “When Moses came with the Torah at Sinai God asked for surety.” The old women sighed at that point: Oy vey iz mir.

The rabbi kept on speaking, drawing out the notion of security for the Torah, and the young men and women of the real estate field also sighed, frightened that God wants them to uphold the Torah in exchange for property security.

Eventually, the rabbi turned to the kids, telling them that God wants them as “security” from their real estate developing parents — and their parents sighed in relief. In America, children are less expensive than real estate.

The old women still sighed, though.

The bar mitzvah children hadn’t forgotten the Master of the Universe and brought him flowers that they each carried in a bouquet up to the ark.

The Temple’s president then spoke in English, and it actually didn’t sound like a recording. He addressed his holy flock, and then the epic Christian-mimicking bar mitzvah ended. The youth, along with the chorus, took off out of the synagogue, quickly heading to the nearby candy store, where they ordered ice creams.

The crowd exited the synagogue, and cars wheezed and rumbled as the street filled with the stench of gasoline. A special policeman locked the doors of the Lord’s house, and a poor mother sat herself down on the wide stone steps to nurse her baby.

Translated from the Yiddish by Chana Pollack.