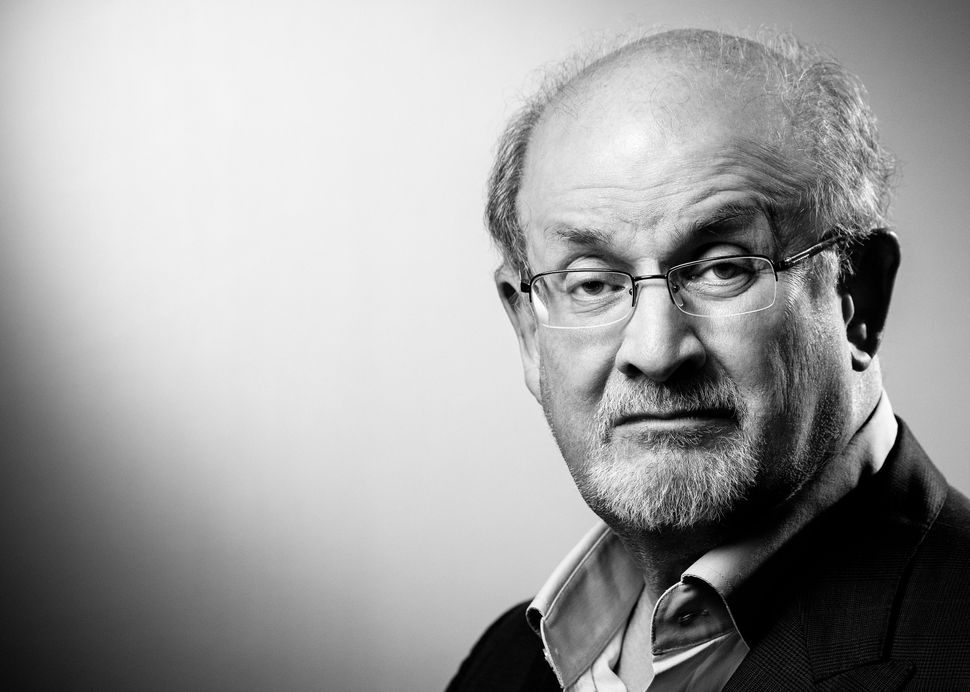 Salman Rushdie is on the phone, and there is much I’d like to ask. For starters: Did Bob Dylan deserve the Nobel?

On second thought, maybe better to go with the old Forward standard: What’s your favorite bagel?

After all, Rushdie is aware that the truth of a character often lies in the details. That was a knowledge he shared with Philip Roth, whose memory he honored last week by giving the Newark Public Library’s annual Philip Roth Lecture. The lecture, which the Forward published in full, was the third of its kind. As was the case with previous speakers Zadie Smith and Robert Caro, Roth himself asked Rushdie to deliver the talk.

For Rushdie, that request turned bittersweet once Roth passed away in May. I spoke with him on the phone about Roth — and bagels, Yiddish, and Mel Brooks — the day after he delivered the lecture. The following interview has been edited for length and clarity.

Talya Zax: You are likely the last author Philip Roth hand-picked to present the Philip Roth lecture. Now that you’ve delivered the talk, what does that mean to you?

Salman Rushdie: I thought it was a great responsibility, first of all to be asked by Philip personally to do it, and then to find myself delivering the first talk since he died. I did take a lot of trouble over it. I spent a lot of the summer re-reading his work and really thinking about it.

Did anything about Roth’s work especially surprise you when you re-read it?

What was interesting to me was how well the books stood up. It can be the case, particularly with books that have been around a long time, that you look at it around many years later and they don’t seem to be quite as powerful as they were when you first read them. When I first read “Portnoy” I was 23 years old and was very excited by it. It seemed very fresh. To read it again now, all these years later, what struck me was that in many ways the shock effect of the book is still there. In a way it’s a more prudish time now than it was then. So the book is in some ways more shocking now than when it was published.

What I felt is that it really adds up to a very, very strong body of work. Sometimes you can’t fully judge a writer’s achievements while he’s still writing books, because there’s a tendency to think of people as only being as interesting as their last book. Once they’re not around anymore, you can really see how those things stand in the eye of eternity. A lot of these books have a serious chance of enduring, from all the periods. “Portnoy” has a chance at being a lasting classic. “The Ghost Writer,” “Sabbath’s Theater,” “The Human Stain,” all of those books have really strong built-in durable qualities.

After re-reading so much of his oeuvre, are there any of his works that you think have been historically underrated?

There’s one or two of his books I must say I could do without. I’m not a big fan of “Our Gang” or “The Breast.” That’s a little slump in his otherwise very consistent body of work. I’ve certainly made the mistake of underrating “The Plot Against America.” When it came out I thought ‘I really don’t buy this book, it’s too far fetched.’ He was right and I was wrong. The later books, the shorter books, many of which are really concerned with the subject of death, I think there’s a couple of those that do stand out. I think “The Dying Animal” is a book that might be underrated, and I really like “Everyman.” I think on the whole, Philip was in the fortunate position that he died with his reputation at a kind of pinnacle, and was widely accepted as being one of the greatest writers of the 20th century. I don’t see that evaluation changing anytime soon.

Do you think Roth’s death has changed or will change the literary landscape? How?

I think he was the last of the big figures of the generation which included Bellow and Mailer and Updike and Cheever and Baldwin, all these guys. So in that sense it is the end of a very important chapter in American literary life. But also, I think you have the sort of sad feeling that literature — that all the makers of literature, literary writers — are not significant in America in the way that they used to be. That generation of which he was a member, those writers felt very influential on the culture. I don’t think that’s so much the case anymore, sadly. I don’t think people care that much, about even the greatest writers who are still around. I think that’s a loss for the writers, but I think it’s also a loss for the culture at large.

What do you think is responsible for that shift?

Well, television, bad education, the usual things. One of the things that is unusual is so much in Europe and the [United Kingdom], books still occupy a central place in the culture. If there’s a general election in England, the media will go to people like Julian Barnes and Martin Amis and people are interested in what they have to say. In France that’s also true. Here I feel there isn’t an interest, so much, in what even the best writers have to say about what’s happening. It’s as if the role of commentary has been professionalized. There is now a professional class of commentators, and if you’re not a member of that professional commentariat, there’s less interest in having you say your piece. It’s a real shame. There are a number of writers — Philip, Don DeLillo, Cormac McCarthy, who could have interesting things to say about what’s going on.

What is the single most surprising thing you learned about Jews from Philip Roth’s novels?

Well, I guess one of the things I learned is that they’re very good at making fun of themselves. Not always good at taking the joke. But good at doing it. That was helpful to me, in a way, because I was trying to write material that was satirical about the world I came from. It was helpful, reading all those Jewish writers of the post-war period in America.

In your lecture, you spoke about Roth’s use of Yiddish in his writing. Do you have a favorite Yiddish word? Why?

Maybe schmuck, or shlemiel, one or the other. The great thing about Yiddish is it has great comic potential. I think Philip exploited that. Schmaltz is a useful, there’s a lot of that around.

What, in your opinion, is the ultimate bagel?

I like them pretty plain. I don’t like them with seeds on. I just like a good, fresh toasted bagel with some lox and cream cheese and quite a lot of pepper. The pepper is important,.

Which Mel Brooks movie is funniest?

I absolutely adore Mel Brooks. I’ve had the good fortune to meet him a few times. He’s actually just as funny in person as he is in his movies. Obviously, “The Producers,” but I’m a great lover of “Young Frankenstein.” I like that one a great deal. If somebody had never seen the work of Mel Brooks, I would suggest they start with those two films.