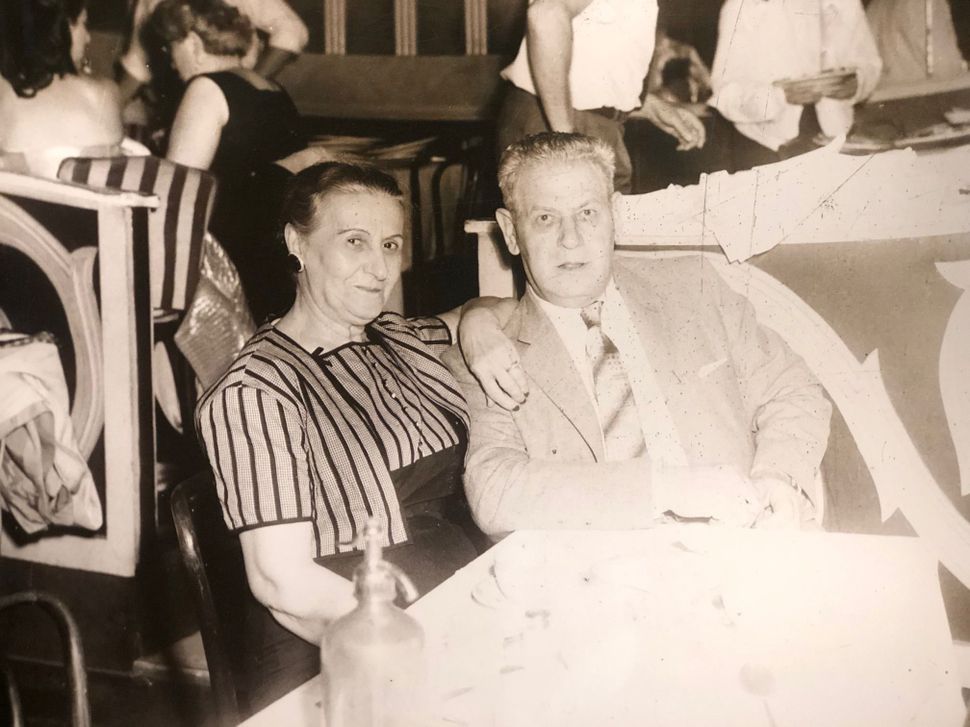 When Harry met The Forward he also met Ester. Image by Gert Levitan

“So much happened in that time. My dad was really a great guy — I guess you could say, in the end, that he was a salesman. “

This is a love story from another time, a saga that transcends borders. Our tale begins in Poland, where Harry Korniarski was born, and winds its way through Belgium and Russia to New Orleans, where he met Ester Gelman Leichner.

He was the coal stoker on a ship, she a seamstress, and they were brought together by the unlikeliest of matchmakers: a beloved Yiddish-language daily that just happened to be in the right place at the right time.

Our loving narrator is Gert Levitan, the daughter of Harry and Ester. Now 90, she lives in an elder residence in North Carolina, blessed with an uncanny memory for detail and a strong desire for her family’s history to live on.

“If not for the Forverts Newspaper I would not have been born,” Gert wrote in a recent email. Intrigued, we called her up.

Gert has two sons and two grandsons and the sweet memories of a long marriage to Sam Levitan, who started as a bank teller and ended up a vice president. She left New Orleans after Hurricane Katrina and moved to Atlanta and then Baltimore, and finally to North Carolina, where she keeps herself occupied by searching for genealogical treasures on the research site Ancestry.com.

“I know a bit about the computer,” she said. “I can look for things. So I’m looking up all my dead relatives.

“It’s a fact of life — death — I have to make room for the next generation, right?” she continued. “I want my grandchildren to know about our life in New Orleans — I mean, they won’t know about it unless I tell them.”

Gert’s story recalls another century and a different America, one where Jewish peddlers would head west as far as Texas during the harvest seasons when the farmers’ wives would have money to spend. Jews in New Orleans, she says, “were accepted, although not first-class citizens, but they did very well.”

Gert’s story goes like this: Harry, who was born in Poland, managed to make his way to Belgium, where he got married, became the father of two children (who would later become Gert’s older half-brothers) and proceeded to make his living at sea by tending to the boilers on various ships.

Meanwhile, Ester had arrived in the United States from Russia in 1910, at the age of 10, then eight years later moved to New Orleans, married and had a son, opened a dry goods store that would later focus on dresses and became a widow when her husband — a peddler named Joseph Leichner — died in a train crash.

To that point, Harry and Ester were leading lives that seemed unlikely to intersect. But then in the early 1920’s, Harry arrived in New Orleans on a ship that docked to unload goods. “He had leave,” said Gert, “and while most of the other sailors drank, he wound his way around Magazine Street.”

And that, dear reader, is where Harry met Israel Gelman, his future father-in-law, sitting in front of his daughter Ester’s store.

“My father doesn’t speak English — he’s walking up the street and here’s this little man reading the Forverts,” said Gert. “He goes over, sees the Yiddish writing and says: ‘Do you have any old papers you want to discard?’ And inside the store Israel went to pass the old newspapers to Harry, and they started up a conversation.”

Here they were, two Jews whose origins were on the other side of the ocean, now bonding over the largest-circulation Jewish newspaper in America. “My grandfather had only been there three years at the time,” Gert said. “He only spoke Yiddish and was thrilled to have a Yiddish conversation.”

“He invited Harry in. My mother lived above the store and she invited Harry to have dinner after the store closed for the day. My father refused, saying he had an appointment.” A short while later, however, family members saw Harry gorging on bread and bananas at a local grocery store. He had been hungry all along but perhaps felt ashamed to admit it to people he had just met — especially since his own wife and children were still back in Belgium.

But Harry came back the next day —- for another copy of the Forverts; this time he said “yes” to dinner. And the next time he returned to New Orleans, Gert said, Ester and Israel suggested that Harry leave the ship for good and make a life for himself in New Orleans — as a peddler. “Being a fireman on a ship is a very hard life. It’s no life,” said Gert. And indeed, on Harry’s third visit, he did jump ship. He was in America to stay.

Now, let’s pause for a minute to get a fuller portrait of that time. Gert’s future mother, Ester, who had emigrated from Russia as a child, had grown into an excellent seamstress, who lacked a sewing machine and thus crafted everything by hand — including shrouds for a funeral home. 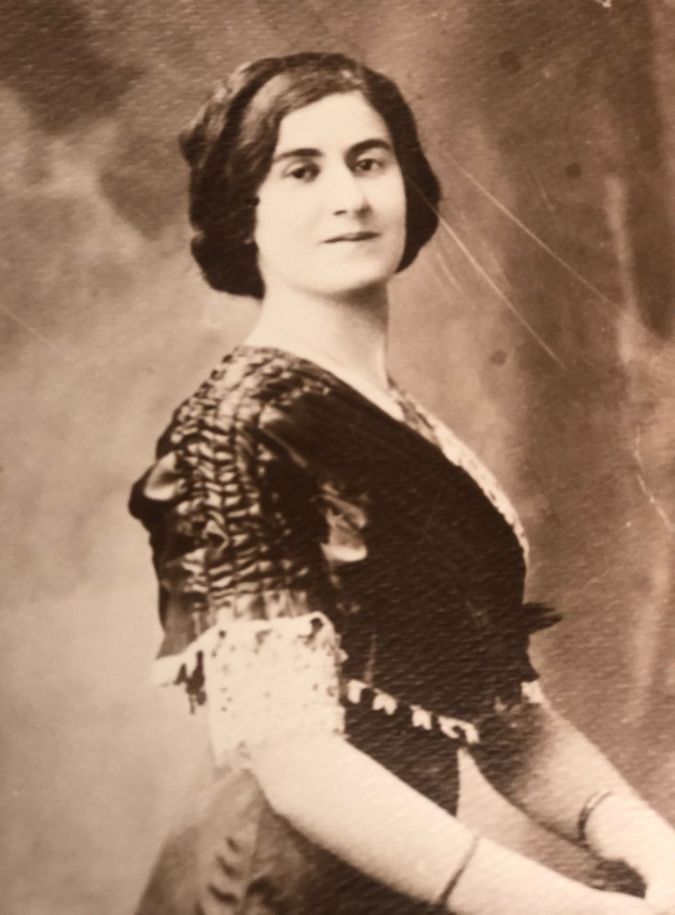 Ester Gelman in a dress she made. Image by Gert Levitan collection

“She was an amazing woman,” Gert said.

Harry, Gert’s future father, had jumped ship, and proceeded to bring his wife and two children from Belgium to join him in New Orleans. He had a new life in full, but within a few years he found himself divorced, with his wife and sons moving away. Harry remained in New Orleans, working as a peddler like so many other Jewish men, but in a salvage yard as well. 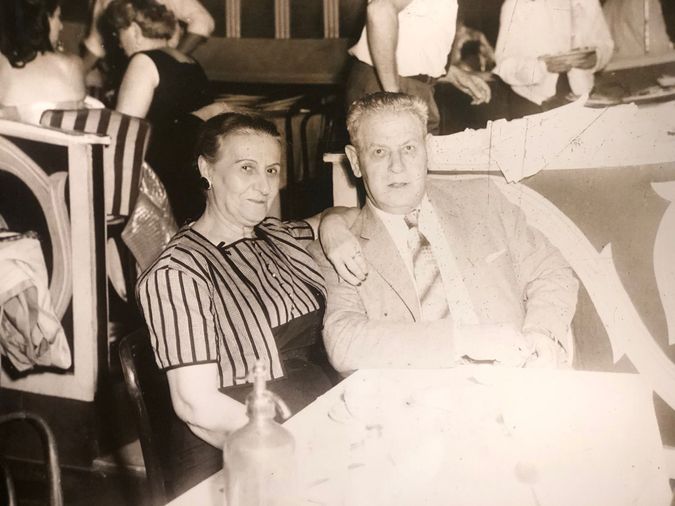 When Harry met The Forward he also met Ester. Image by Gert Levitan

Gert would be born soon after, becoming the fourth member of a household that also included Ester’s son. Harry eventually joined Ester behind the counter of the store. The family’s shop, where Gert would end up working, too, would change addresses from time to time, but it would always stay in New Orleans.

“Uptown, downtown, back and front of town along the riverfront as they say,” said Gert. And wherever the shop was, Yiddish was often their language, and her mother’s dress-making talent was the draw.

And with much of Europe becoming an increasingly untenable place for Jews, Harry also had a new mission: to save his family members in Europe. In 1938, he did just that, managing to bring over 23 relatives from Germany.

One of those rescued in this effort was Martin Lewkowicz, who would go on to become a Normandy-landing, Nuremberg Trial-interpreting United States colonel. In World War II he had a role in the arrest of Hermann Goring, the head of the German Luftwaffe. 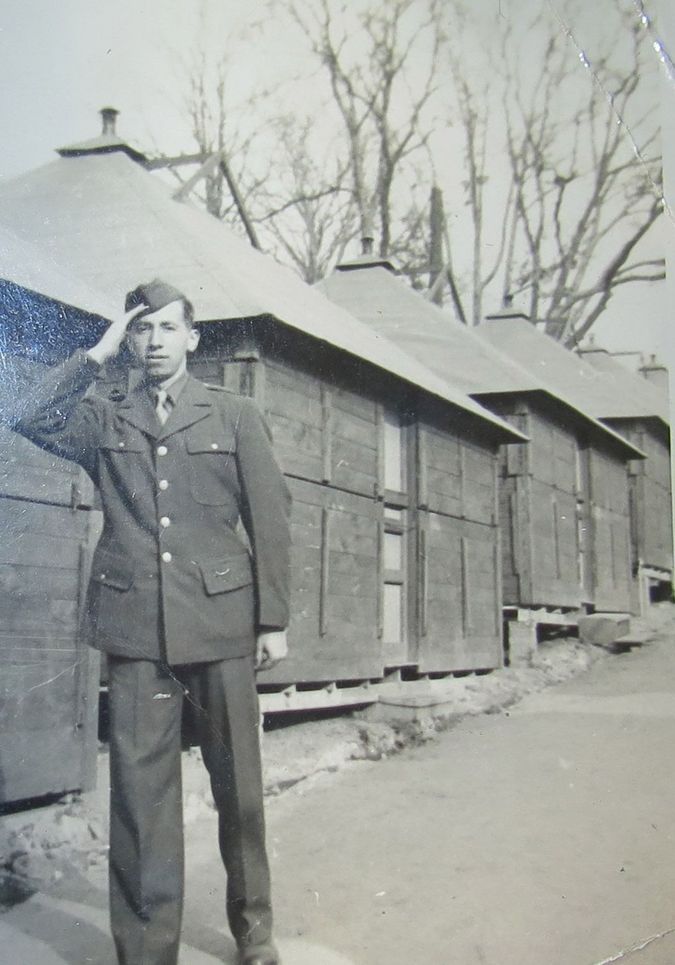 Thanks to Gert’s incredible eyzener moyekh, as we say about a great mind in Yiddish, we were also able to interview Martin’s daughter, Cousin Sarah. In an interview on the telephone, Sarah began to list all of those who were saved and it went on longer than you would believe possible.

At which point, you start to understand why Sarah remembers it all. And why the Forward, after all these years, still remains a major address for the Jewish people. It is a place for the collective memory of the trauma, but also the miracles.

And her own father, the future colonel, who had at one point had been deported from Berlin during Kristallnacht, to a camp in Poland. In the end, he, too, was able to escape.

In 1938, the same year he brought so many family members to safety, Harry became a United States citizen. “ My mother never became a citizen,” Gert said. “I think she was afraid she wouldn’t pass the test.”

But in a real sense she already had. And in the life that she built here with Harry, the Forward would always be there to help keep them company. “Harry kept reading the Forverts until 1966,” the year he died, said Gert. ”He would read to my mother, the seamstress, from the ‘Bintl Brief.’ She loved it. He would read the whole paper behind the double counter.” 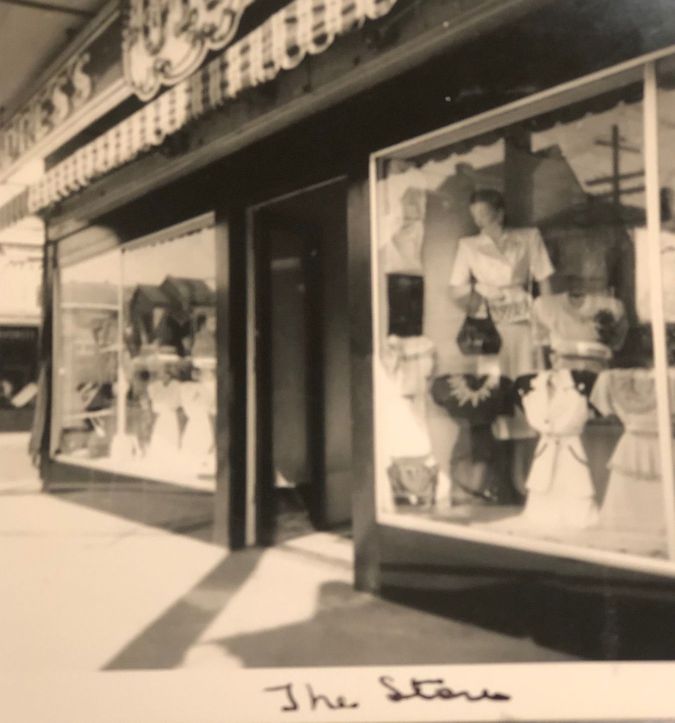 “The Store” named for Gert. Image by Gert Levitan

And so ends this mayse of the ancient Jewish immigrant mariner turned peddler turned salvage yard worker turned dress store owner. The story of a wife who survived in part by sewing shrouds and of a husband who left no stone unturned in his rescue efforts while working behind the counter of a shop named after Gert. A story that is now officially part of the Forward and its family of readers.

Do you have a story of how the Forward made an impact on your family? Send it to dearchana@forward.com