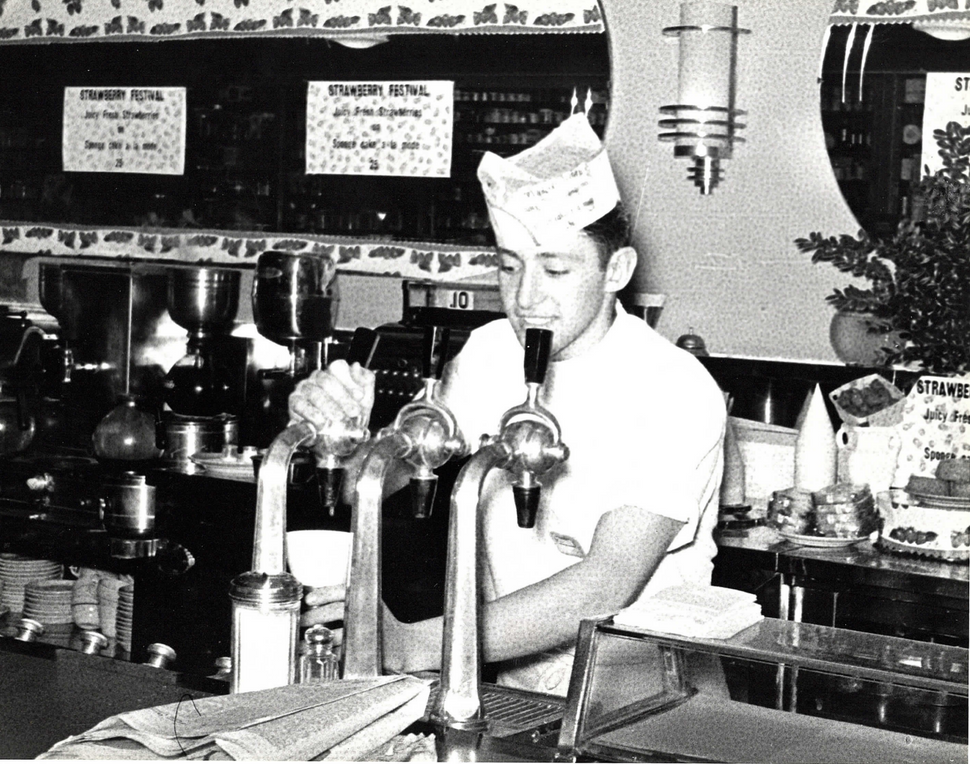 It was a very unusual experience — sitting in a wire mesh cage surrounded by dead chickens that were waiting to have their feathers removed. Aside from babysitting, it was my job: “Chicken Plucker.” What was required was a quick jerky movement of the fingers and hand to sever the chicken feathers from the chicken. Before my time, this job had been performed by old Jewish ladies sitting outside a butcher shop. The introduction of the wire mesh cage took the plucking off the street. By the time I entered the profession, the cage room was the Cadillac in chicken plucking. It kept the floating and flying feathers within the confines of the cage, but unfortunately did not bode well for the pluckers, whose eyes, nose, ears and mouth were flooded with feathers and dust.

Bernie Weiner was the owner and only employee of this business except, of course for us kid Chicken Pluckers, also known as “Chicken Flickers.” He would stand behind the counter where the chickens were displayed after their feathers had been plucked. Jewish housewives would enter the store, stand in front of the counter and feel the chickens, paying special attention to the breast in order to determine which chicken to buy. Very unscientific, I thought.

“Lady! Why are you feeling the breast so hard? It’s a chicken, not Mae West,” Bernie would always say. I thought those were the only words he knew.

I didn’t last too long at that job; too much sneezing.

There were other places to get a job in the neighborhood. My allowance was insufficient for my needs as a teenager, so I always had to work, so I decided to try my hand at soda jerking. Soda jerk! That’s a term from the 40s and 50s that describes a person who dispenses carbonated soft drinks at a soda fountain. The way I saw it, there were three choices for me; Winkleman’s Candy Store, located at the foot of the stairs of the Pelham Parkway & White Plains Road train station in the Bronx; Ruby’s Ice Cream Parlor, 15 stores south of Winkleman’s; and Smitty’s Luncheonette, around the corner from Ruby’s on Lydig Avenue. In the next few years, I worked as waiter, counterman and soda jerk at all of them. 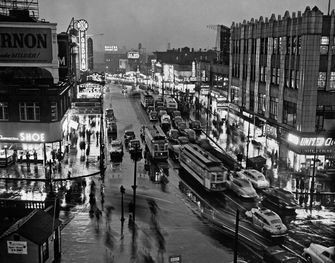 A Different World: A view of the Bronx in the 1940s. Image by Getty Images

Winkleman’s was my first choice. There I met people who were either going to or returning from work as they ascended or descended the stairs of the elevated train station. They would stop in for a Coke, some chewing gum, a pack of cigarettes or an egg cream. Cigarettes were hard to come by in those days. Most were sent to the armed forces even though World War II had been over since 1945. Packs and cartons of cigarettes were hidden under the counter and available only for regular customers and I was their guardian. Mrs. Winkleman was mean and always had a snarl on her face. Mr. Winkleman was much easier to work with. After a few months, the job got really boring, so I left and moved on to Smithy’s — a luncheonette and ice cream parlor. It was a lively place with a younger crowd than Winkleman’s.

The owner was Jerry Smith. He was in his early twenties and pleasant to work for. Basically there were two positions there; the counterman prepared the food and ice cream dishes and the waiters served the people at the store’s ten tables. I liked doing both jobs but preferred to work behind the counter.

To be successful at Smitty’s, you had to learn the luncheonette lingo. When you took a customer’s order you would either write it down or call it in, or both, depending on the circumstances. If two people were sitting in one of the booths and they ordered one “Bacon, lettuce and tomato on toast with mayonnaise,” one ”Grilled American Cheese & Bacon,” “2 Coffees, one black, one with milk,” you would write down or yell the following: “One BLT down, Mayo, one GABC, draw 2, one with cow juice.” “Stretch one, paint it red” meant a Cherry Coke and “86” was code for “we’re out of it.”

“Wreck’em” meant an order of scrambled eggs; a “houseboat” was a banana split; a “dead eye” meant a poached egg; if you wanted something on the side, you got it “in the alley; if you wanted your steak rare, it was “on the hoof.” “On wheels” meant you were getting something to go; “Adams ale” was a glass of water and “lumber” was a toothpick.

I enjoyed working at Smitty’s, but after a while, I felt the urge to move on, so I applied for a job at Ruby’s.

Near the front of the store, there was a showcase displaying a vast array of racks of chocolate-covered candy and nuts, like you would find in a box of Barton’s or Barricini chocolates. The boxes said “Ruby’s Candies.” Then, there was the soda fountain. Behind the counter, there were malted milk machines, a sandwich board, Silex coffee pots filled with fresh coffee, the griddle for making sandwiches and pancakes, and the carbonated water levers; when you jerked them down, they dispensed soda or just plain seltzer. That’s where the name soda-jerk came from — the sudden jerk of the levers. “Jerk” was also a play on the word “clerk.”

The back third of Ruby’s was the seating area of the luncheonette. It had about 14 booths, each of which could accommodate four people.

Armed with my knowledge of the candy store and luncheonette business, I was first greeted by Herby Rubin, son of Pop Rubin, who owned Ruby’s. Everybody called him Pop and, although I got to know him well during my time there, I never did find out his first name; he was always Pop.

Herby was the store manager and ran the luncheonette and ice cream part of the business. He asked me if I knew anything about candy making.

He told me a little about the back room, where the candy was made; one of the job requirements, in addition to food preparation and service, was to assist Pop with making candy in the back room.

The back room was the heart of the candy-making operation. To the left was a stove. On top of it was a large brass kettle used to make candy centers such as caramel, nougat, jelly and marzipan. Toward the middle of the room was a table with a marble top where the hot, viscous candy centers would be poured to cool and thicken, after which they would be cut and shaped, then later, covered with chocolate. Then, there was a room within the room in which a special stove heated a bath for the chocolate. Racks of candy centers, cut to appropriate sizes and shapes, would be placed in front of the heater where Helen sat. She would come in once a week to dip the centers.

Occasionally, when I was working in the back room while she was dipping, I would engage her in conversation and at the same time watch her dipping the candy centers in the melted chocolate and placing them on a marble table giving each piece the right curlicue swirl that would identify what lay inside the chocolate.

One day, Helen was called away for some emergency, and she had to leave. I was in the back room at the time. When I entered the chocolate dipping room, I noticed that the chocolate receptacle contained some warm and luscious-looking melted milk chocolate. There we were, the two of us — the vat of warm chocolate and me. What would any red-blooded chocolate lover do in this situation? It was obvious.

I took my index finger and immersed it in the vat of chocolate as far as it would go. After I removed it, I realized that what I had was a chocolate-covered index finger. Had I invented a new kind of candy? I put it in my mouth, pursed my lips and removed the finger, now free of most of the chocolate. I concentrated on the sensation of the chocolate in my mouth — that was a moment to remember.

During my several years at Ruby’s, Pop called on me often to help him with the candy making. It was a lot like chemistry class in high school and I loved working with Pop. Three operations remain in my mind to this day. One was making Christmas candy canes:

Heat sugar, corn syrup, water and cream of tartar in a saucepan to hard-ball stage. Add peppermint extract. When cool enough to handle, divide in two parts; 80% and 20%. Add red coloring to the smaller part. Form larger part into thumb shape and small part into four thin strips. Put red strips on top of the larger part and start pulling lengthwise. Pull and shape until you get the candy cane.

Then there was deep-frying whole cashew nuts, and the third was making the “Cordial Cherry.” 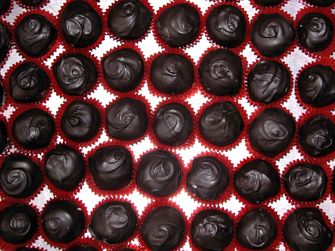 Cherry Cordial: How did the cherry get inside the chocolate? Did you have to use a hypodermic needle? Image by IStock

That had always intrigued me even before I worked at Ruby’s. A Cordial Cherry is a cherry encased in chocolate with a liquid center. How did the liquid get inside the chocolate? Was a hypodermic needle inserted into the chocolate? No! That is not how it’s done. I found the answer in two places. One was in chemistry class; the second was when Pop showed me how to do it:

Surround a dry Maraschino Cherry with a kneaded, thick, mixture of sugar, salt butter and corn syrup to form soft, pliable dough. Fully encase the cherry in the dough and let it stand to harden. Then dip in melted chocolate and let stand. In a few days, the acid from the cherry will react with the sugary dough to liquefy it; and that’s how the liquid center is encased in chocolate.

Pop called on me to prepare cashew nuts quite often and to this day I deep-fry them at home in my wok, at least once a month. My family is always happy when they come to visit and I bring out the cashews.

Things changed considerably after Pop died. The store closed for several days and when it reopened, Herby took over. The candy in the showcase was either sold or otherwise disposed of. Unfortunately, Herby did not have his father’s skills and the candy-making part of the business came to a halt. Ruby’s was never the same after Pop died, but I worked there until I moved on to my next world: college.

And who would have thought that the very hand that spread the mayo on the BLT, that had the index finger immersed in a vat of warm milk chocolate, that held the pencil that prepared a thousand balance sheets would hold the knife that sliced the Lox that made my world go round.

Len Berk is The Forward’s lox columnist. He worked behind the counter at Zabar’s for 26 years.