Rita Alexander (Lily Collins) and Herman Mankiewicz (Gary Oldman) cheers, after she learns, as a sponsor of refugees, he deserves a drink. Image by netflix

Holed up at a dusty ranch in Victorville, California, with a full-leg cast, screenwriter Herman J. Mankiewicz has been self-medicating as he works his way through a draft of “Citizen Kane.” When his secretary, Rita Alexander, learns he’s sneaked booze into the guest residence, she confronts his accomplice, a German nurse.

“Frieda, you mustn’t let him intimidate you,” Rita says.

Fraulein Frieda insists she’s not intimidated at all. She has her reasons for helping Mankiewicz drink.

“Herr Mank sponsored my family’s entry into this country,” Frieda says. “He’s responsible for us getting safely out of Germany, legally and financially.”

And not only Frieda and her family — her entire village of over 100 people.

This exchange, featured in David Fincher’s biopic “Mank,” raises many questions. Rita (played by Lily Collins), introduces most of them herself — “Really?” “Entire village?” — before finally saying, “I didn’t realize.” 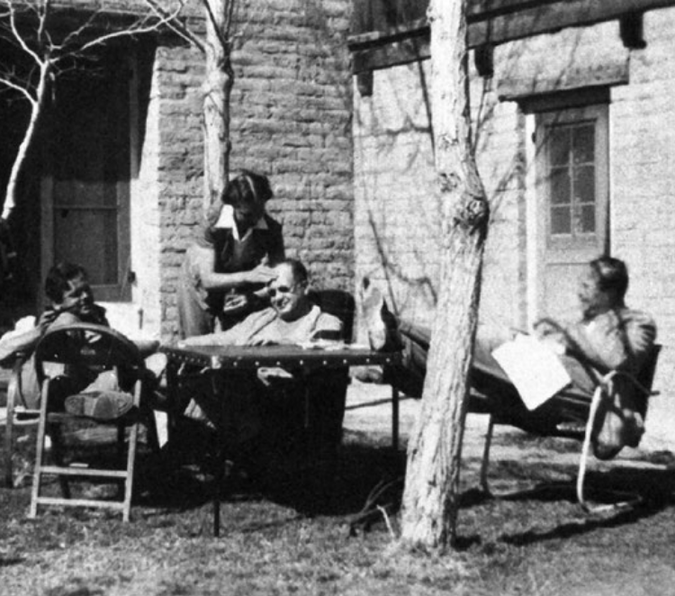 Herman (C) has his brow wiped by his nurse (not Fraulein Frieda) at Rancho Verde in Victorville. Welles sits to his right as producer John Houseman reads.

The story seems far-fetched, a bit of hagiographic trickery the real Herman Mankiewicz would have mercilessly mocked while nursing a highball. Was it true? Did he, single-handedly, bankroll a whole German town only to be pampered by one of its former residents?

“Herman did have a nurse,” said Sydney Ladensohn Stern, the author of “The Brothers Mankiewicz: Hope, Heartbreak, and Hollywood Classics,” a dual biography of Herman and his brother, Joe. “She wasn’t Fraulein Frieda. And he did have a secretary — I doubt she was as pretty as Lily Collins.”

But, as for the refugee situation, it was true, at least in part.

As the Nazis came to power, Herman’s father, Franz, who had been a prominent academic in his native Berlin, would write to him and Joe with names of people looking to escape. Herman, a champion of the underdog, likely promised support when he was overleveraged, as he often was. Not everyone the brothers helped were Jews, but many were; some were members of the Mankiewicz family who ended up settling in Canada. It’s unclear exactly how many they sponsored. 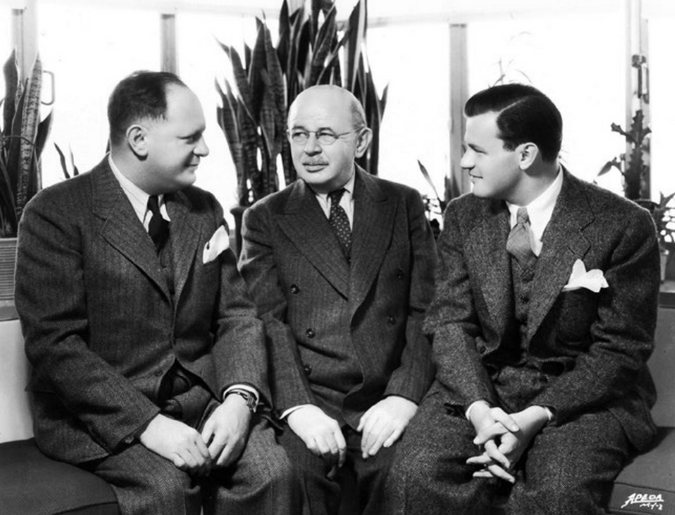 “Did he bring over a village? No, I think that’s poetic license,” Stern said.

Much of the film is.

While Stern thinks that “Mank” captures Herman’s sardonic, self-destructive and ultimately principled character, as portrayed by Gary Oldman, certain events are amplified or invented. It nonetheless is steeped in Herman’s world, and features a veritable Rolodex of his associates — from writers Ben Hecht and S.J. Perelman to moguls like Louis B. Mayer and Irving Thalberg. Written by Fincher’s late father, journalist Jack Fincher, the movie is a brimming Easter egg basket for film buffs and something of a referential scramble for the average viewer.

For John Mankiewicz, Herman’s grandson and a writer for the TV shows “House,” “House of Cards” and “Bosch,” Fincher’s movie is chockablock with family stories. There are Herman’s famous one-liners: “The white wine came up with the fish,” said upon vomiting. Allusions to Herman’s telegram to Hecht to come to Hollywood: “There are millions to be grabbed out here and your only competition is idiots.” But there is also a prevailing sense of Herman’s discomfort with his craft.

“There was a lot of self-loathing involved on Herman’s part for doing what he was doing,” John Mankiewicz said. “He used to say ‘What we’re doing is we’re making a product that gets shown on the walls of converted grocery stores for a little while and then gets cut up into mandolin picks.’”

Coming from a learned, assimilated German-Jewish family that worshipped Goethe, and with his own background as a theater critic, Herman scorned the new form of cinema. Once, as a punishment, Warner Bros. assigned him a Rin Tin Tin movie, John says. He wrote 120 pages to get to a climax where the titular dog ran into a burning building with a baby in his mouth.

But Herman eventually came to see film’s advantage as a populist medium and used it to draw attention to a growing danger.

As Fraulein Freida tells Rita: “He wrote a picture about the Nazis which no studio anywhere will dare make.”

That film, which was never made, was called “The Mad Dog of Europe,” a thinly-veiled warning about Germany’s new head of state. As Stern’s book chronicles, the screenplay tracks two parallel stories: the rise of a house painter named Adolf Mitler, and the Jewish and Christian families his regime tears apart.

While much of Herman’s film work up to that point had been studio-assigned or boilerplate, he wrote “Mad Dog” in 1933 on spec, and — as Freida rightly noted — no studio would touch it for fear of losing the German market. Even the ADL objected to it, believing that anti-Nazi messaging was best handled by gentiles to avoid inflaming antisemitism.

The script’s approach was not typical journeyman work and was far from subtle, envisions slow cross-dissolves of a swastika and a crucifix and mixing real footage of banks closing with recreations of book burnings and “Mitler’s” Beer Hall Putsch. Mankiewicz, a student of history and former Berlin correspondent who witnessed the German inflationary spiral firsthand, was uniquely equipped to handle this evisceration of Nazism.

“One of the most interesting things about it is he watched this rise, wrote this very prescient movie about it and then when he didn’t sell it spent the rest of this time being extremely anti-war,” Stern said.

In “Mank,” Herman’s views on Hitler’s early significance are offered in a scene that takes place in newspaper tycoon William Randolph Hearst’s San Simeon estate, where the writer warns of concentration camps and book burnings to a dismissive crowd. Yet Mank was a self-described “ultra-Lindbergh” when it came to American involvement in the war — meaning, he sided with that famed aviator turned isolationist and, yes, antisemite, when it came to sending our boys to Europe for a costly campaign.

That fact is dramatized when Herman callously mentions the impressive German Stuka dive-bombers and U-Boats taking aim at British aircraft carriers. (Callous because he does this in earshot of Rita, who just received a letter that her lieutenant husband’s ship was sunk off the coast of Norway.)

Life imitates art here. Even as Mankiewicz was aiding refugees and reveling in the Reich’s boycott of his films — likely because he wrote “Mad Dog” — he was belligerently insisting on the unmatched strength of the German war machine, often to the point of causing great offense.

He called the Rome-Berlin Axis “so overwhelming as to make the thought of conflict the work of a madman.” These publicly-trumpeted views led someone to characterize Herman as a Nazi to his friend Irving Berlin. He responded, in an October 1941 letter to the composer, one of the few bits of writing Stern found untainted by sarcasm or irony, that his views had been “somewhat oversimplified.”

Should America enter the war, Mankiewicz reasoned, “I believe that the worst will have happened for America, win, lose or draw. And so it is for this reason that I oppose, with my own puny strength, any and all efforts to associate ourselves with the war.”

“He’d seen war close-up he didn’t want it to happen again,” Stern said, citing his experience in World War I, “and he didn’t feel it was worth American lives to help the Russians for sure, to help the English who were colonists — he disapproved of empire.”

He would come around, like most of the country, after Pearl Harbor and even try to enlist.

But in 1940, with the war in Europe in full swing, Herman had moved on from “Mad Dog.” By then, another picture, “Hitler, Beast of Berlin,” a “hiss and boo” film based on a novel by Shepard Traube, took a more direct approach to cutting down the Führer. Herman, urged on by Orson Welles, decided to hunt a dangerous quarry a lot closer to home: his old friend Hearst. 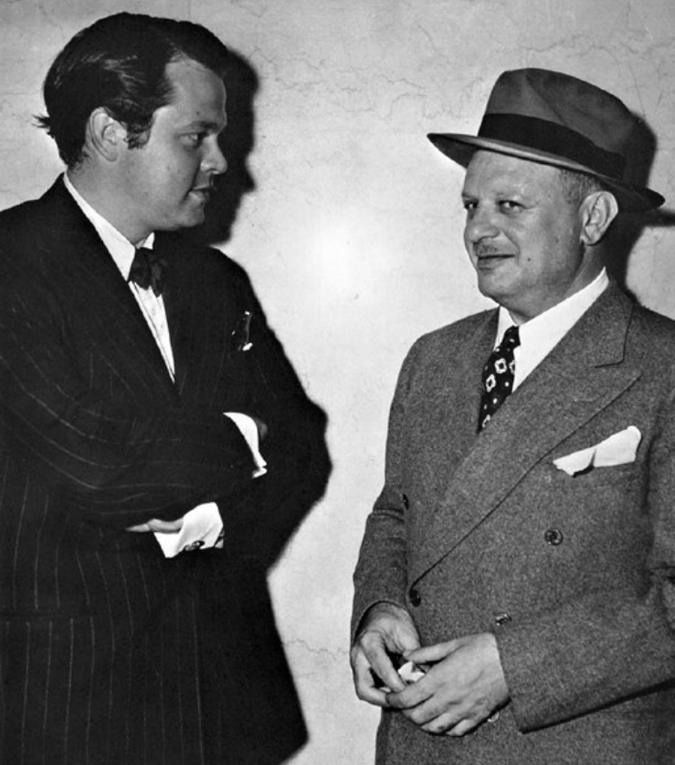 “’Mad Dog of Europe’ had gone nowhere,” illustrator Alex Mankiewicz, Herman’s niece and Joe’s daughter, said. “That was too on the nose, too in their face. ‘Citizen Kane’ was his platform to say ‘while everyone’s enjoying this wonderful film, I’m actually getting something out there that matters.’”

The project that would become “Kane” was a blank creative check to Welles from the struggling RKO Pictures. And Mank, working for the wunderkind of the radio and theater, took advantage of this freedom by experimenting with form and weaving a complex morality tale about power, wealth and memory. For all his efforts, Herman originally agreed to not take a screen credit — he’d gone uncredited many times before, even on “The Wizard of Oz.”

But as in “Mank,” Herman realized that the story of Charles Foster Kane was his best work, informed by his own time as a habitué of Hearst’s estate and helped along by his isolation in rural Victorville as he recovered from a broken leg in the desert heat.

Herman in bed — with cast — in Victorville.

Knowing what he had, Mankiewicz finally pushed for credit for the screenplay and, in so doing, cemented his legacy with one of the most narratively daring films of its time. He split the film’s one Oscar, for screenwriting, with Welles who, the film contends, had little to do with the script. (The authorship question, bitter in 1941, is the subject of continued debate; John and Alex Mankiewicz believe the script was Herman’s, but the film wouldn’t be the same without Welles.)

Herman would die early in 1953, but lived long enough to see baby brother Joe win four Academy Awards of his own — two for directing and two for screenwriting — while applying his own brand of social consciousness to films like “No Way Out.”

With “Mank,” both Herman and Joe have a new, hyperliterate addition to their legacy — one that Alex Mankiewicz thinks might have challenged their early read of cinema as a lesser art.

“These two men who would probably say ‘You can’t make films like that! About a writer complaining about writing.’ They both, perhaps grudgingly, in their way would go ‘Yeah, you can make a film like that.’”