Need a movie to watch on Christmas? These are our favorites. 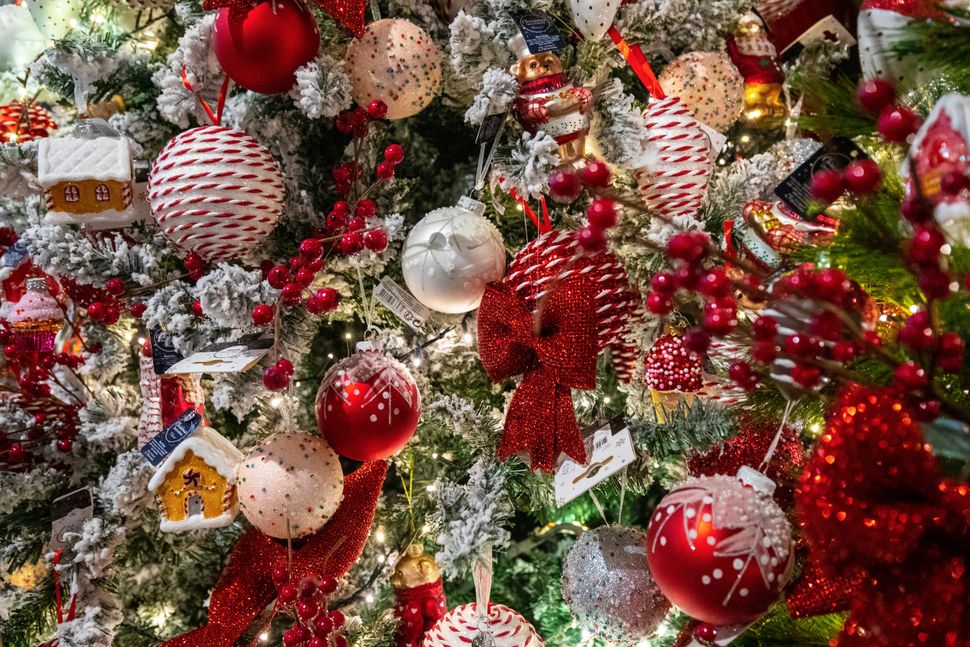 Members of the Tribe, we have faced great challenges this year, taking Seders and the high holidays virtual and mastering socially distant minyanim. Through shifting CDC policy and mixed messaging from lawmakers, we have tried to keep ourselves safe while honoring our culture.

Now, we must once more persevere despite our uncertain world. Yes: We must watch movies this Christmas.

Thankfully, the Forward has some strong opinions about film, and we realized that quite a few of our favorite movies and shows are in the Christmas spirit.

With theaters shuttered and only so many blockbusters coming our way — and one of those scintillating “blockbusters” being a movie about the writing of “Citizen Kane” — we decided to tap into our reserves of merriness and give you our picks for what to watch on December 25.

We have curated some classics, some offbeat favorites and even some fare that we insist is Christmassy, even if it appears to be one protracted car chase through the apocalypse. All can be viewed without inhaling other people’s droplets or traipsing across a sticky theater floor.

Each year, TBS broadcasts this adaptation of Jean Shepherd’s childhood reminiscences of a 1940 winter in what I choose to see as a concession to its Jewish viewership. I love this movie, not because Shepherd’s name was originally Eugene Sefardi — it wasn’t — but because it captures the sort of tender but irreverent family dynamic that’s more familiar to me than the saintly austerity of the Cratchits or the cherry phosphate-wholesomeness of the Bailey clan. My father, who still takes pride in an amateur sculpture he made 30 years ago, would no doubt cherish a major award in the form of a leg-shaped lamp. There’s a reason the 2012 sequel felt comfortable recasting the Old Man as Daniel Stern and gave Ralphie’s friend Schwartz a bit more to do. While not Jewish-coded, it bears mentioning that the film does include a Christmas dinner at a Chinese restaurant. That last part didn’t age well — but the rest of it holds up.

Growing up, my dad had a friend who was the puppeteer for Gizmo, the mogwai mascot of this alternative Christmas classic. He had to perch between Phoebe Cates’ legs with the puppet as she delivered a super morbid monologue about how her character’s dad was found dead in a chimney dressed in a Santa suit.

For some reason this creature feature clicked with me when I was young. Its theme was the first thing I learned to play on piano, and remains to this day the only thing I remember how to play. As an adult, I appreciate its quirks, thanks in no small part to musician Nick Lutsko’s dogged attempts to initiate a third installment of the franchise. If you like a bit of monster madness with your holiday cheer, “Gremlins” is a good option. Bonus Jewish points for including Cates, famed character actor Dick Miller and Howie Mandel as the voice of Gizmo.

Christmas is, of course, about a virgin birth, making “Jane the Virgin” perfectly on theme. It’s admittedly not a movie, but in the age of prestige television, I’d argue that television often surpasses film. This, however, is not prestige television: it’s a telenovela, and one of the cleverest and most self-aware shows I’ve seen. The titular Jane was accidentally artificially inseminated, a far more plebeian version of the virgin birth that does not prevent her from being hounded by nuns. There’s every telenovela gimmick you could imagine — identical twins, characters coming back from the dead, someone with an eye patch — as well as a lot of heart. The creator, Jennie Snyder Urman, is also Jewish, if you needed more reasons to make this your Christmas watch.

Look, we love to hate it, but everyone secretly likes at least one of the storylines. Yes, the way Emma Thompson quietly accepts Alan Rickman’s cruelty causes me physical pain, and yes, the iconic scene in which the sad sap in love with Keira Knightley arrives on her doorstep with signs proclaiming his adoration is frankly creepy despite being presented as romantic. And there’s Laura Linney’s storyline, with the beautiful man from work she turns down because of her brother, the intended lesson of which I cannot ascertain, and the weird one about the porn actors. The whole thing is a mess. But I have a soft spot for Hugh Grant dancing — what can I say? Indulge in your guilty pleasure; that’s what holidays are for.

This movie contains everything you could ask of a Austen adaptation: unexpected deaths, new bonnets, Emma Thompson looking worried, elderly women dishing out gossip about everyone else’s romances, bouts of pneumonia after imprudent walks in the rain, Kate Winslet looking worried, illegitimate children, and two Hughs (Laurie and Grant) looking very, very worried. Like the novel on which it’s based, the film is dry and witty, with none of the swashbuckling or florid speeches that often bedevil Regency cinema. By contrast to our most recent crop of period pieces — think “The Great” — “Sense and Sensibility” makes no effort to break the fourth wall or wink at its modern audience. If you want to spend two hours immersed in the concerns and conventions of an era wholly different from our own, this one’s for you.

When I was but a child, I asked my parents if Santa was real. They shrugged and said, “What do you think?”

George Seaton’s “Miracle on 34th Street” basically took that conversation and turned it into a feature film. The movie follows one optimistic lawyer’s attempt to prove in court that an exceptionally talented department store Santa is the real deal, but it never really comes down on one side or the other. It’s also a romp through wintertime New York, touring viewers through parades, crowded department stores and luxurious marble office buildings. Yes, “Miracle on 34th Street” is a movie about Christmas, but there’s plenty of room for skeptics and non-believers here — as well as those of us interested in the power of the U.S. Postal Service to adjudicate questions of identity fraud.

Hear me out: The perfect Christmas flick is “Mad Max: Fury Road,” a movie that has absolutely nothing to do with Christmas.

Or does it? It’s about the ascent of a champion of mankind — Charlize Theron in the once-in-a-lifetime role of Imperator Furiosa — who works to aid the helpless, putting her life on the line for the sake of her cause. It preaches the virtue of challenging the authority of those who exploit the many to feed the few, even when change looks genuinely impossible. (Jesus: Honestly, kind of socialist!) It’s a completely secular film, perfectly appropriate for those of us who like the sentiment of the Christmas season but don’t celebrate its central holiday. And while it’s hopeful about mankind, it’s also fairly excruciating in its depiction of our shared violent foibles, making it an ideal pick for anyone who can’t bear traditional Christmas film corniness.

Ultimately, it’s a short leap from “dashing through the snow in a one-horse open sleigh” to “racing through the desert in a jury-rigged tanker pursued by a bloodthirsty horde;” no great difference between “Rudolph the red-nosed reindeer” and “Furiosa the one-armed rebel war captain.” Give it a try.

Can you honestly say that something is the best winter holiday movie you’ve ever seen if all you can remember about it is a sumptuous Christmas Eve feast, a tragic death onstage, something to do with puppets, a terrifying moment with children being locked away by a wicked stepfather, and the sensation of being totally immersed in a story in a way that usually only happens when you read a great novel?

If the answer to that question is no, then I’d have to say something like “It’s a Wonderful Life” or “Miracle on 34th Street,” the Denholm Elliot version of “A Child’s Christmas in Wales” or the definitely-not-Jim-Carrey-version of “How the Grinch Stole Christmas” is the best holiday movie I’ve ever seen, since I can quote pages of dialogue from those. However, if the measure of a movie’s impact is not the plot and the script you remember but rather the feelings it left you with, I can think of few movies more powerful than Ingmar Bergman’s “Fanny and Alexander,” which mesmerized me in a way no other holiday movie ever has. And the next time I have a spare five hours, I’ll watch it again — so I’ll remember exactly what happened in it.

Need a movie to watch on Christmas? These are our favorites.