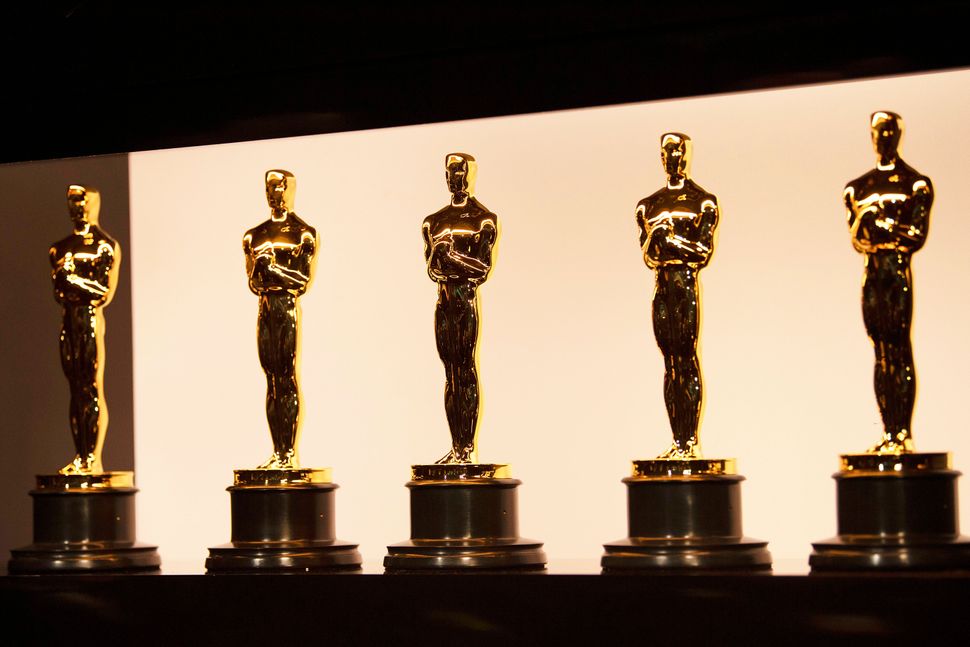 A row of Oscar statues Photo by Getty/Handout

For the Academy, there was only room for one, wigged, weird-accented performance from Sacha Baron Cohen. Naturally, it went to the one scripted by Aaron Sorkin and dripping with sanctimony.

The Oscars announced the full roster of nominees Monday morning, marking nearly a year without cinemas, exempting many of the top contenders from a theatrical run requirement. So, you’d be forgiven for not having seen some of these.

Jews were well represented in the Best Picture category, with “Mank,” a film about Jewish “Citizen Kane” scribe Herman Mankiewicz and the only nominated picture to use the word “mishopocheh.” Also repping landsmen is “The Trial of the Chicago 7,” which features Baron Cohen’s Best Supporting Actor-nominated turn as Abbie Hoffman. “The Sound of Metal” is also up for the top award, and has a Jewish backstory at its center.

Co-writers Abraham and Darius Marder were inspired to write the film, about a drummer losing his hearing (Oscar nominee Riz Ahmed), inspired by their grandmother Dorothy Marder, a Jewish photographer, feminist and gay rights activist — and onetime lover of author Grace Paley — who became deaf after taking antibiotics. The Marders are also nominated for Best Original Screenplay alongside Sorkin for “Trial of the Chicago 7.”

Sorkin, who won the Golden Globe for screenplay, was shut out of the Best Director category, but his “Social Network” collaborator David Fincher is on the board, alongside Golden Globe-winning “Nomadland” director-writer Chloé Zhao and Emerald Fennell, aka Camilla Parker Bowles on “The Crown,” aka the writer-director of “Promising Young Woman.” It is the first time two women were nominated in the category.

With Ahmed’s nomination and Steven Yeun’s for “Minari,” it is the first time two men of Asian heritage have been nominated for Best Actor and Yeun is the first Asian American to ever be nominated in the category (Ahmed is British). They are in the company of previous winners Anthony Hopkins — for “The Father” — and Gary Oldman for “Mank.”

Vanessa Kirby’s gutting performance as a woman — and second generation survivor — mourning crib death in “Pieces of a Woman” was also nominated.

While “Borat Subsequent Moviefilm” did not get a nod for Best Picture or Actor, despite Baron Cohen sweeping Best Comedy and Actor in a Comedy at the Golden Globes, newcomer Maria Bakalova was nominated for Best Actress in a Supporting Role. It was a curious designation, given her screen time and journey in the film, but no more of a head scratcher than Lakeith Stanfield and Daniel Kaluuya both being nominated for Best Supporting Actor in “Judas and the Black Messiah” (which prompts the question, who is that film’s lead? Jesse Plemons)? Side note: For the Razzies, Rudy Giuliani was nominated for Worst Supporting Actor for “Borat” and one half of the Worst Screen Combo with Bakalova.

“Borat” is up for Best Adapted Screenplay — how it’s adapted and “Chicago 7” and “Judas and the Black Messiah,” both based on real events, aren’t, is weird (I guess cause they’re not based on books). But with eight writers “Borat” is the screenplay with the most people credited to ever be nominated.

“Trial of the Chicago 7” is also up for Best Original Song alongside “Io Si (Seen),” inveterate winner Diane Warren’s contribution to the treacly Holocaust survivor drama “The Life Ahead.” It was not on the list for Best Foreign Film, but the Israeli short “White Eye” made the cut for Best Live-Action Short.

Trent Reznor and Atticus Ross are up against themselves for their score for “Mank” and, with Jon Batiste, “Soul.” James Newton Howard is our Jew in the field for the western “News of the World.” This is the rare Oscars without a nominated Newman in the music categories.

In the total haul, the Old Holywood paean “Mank” comes out on top with 10 nominations — though, notably, not one for screenplay for Fincher’s late father, Jack. “The Trial of the Chicago 7,” “Sound of Metal,” “Minari,” “Nomadland,” “Judas and the Black Messiah” and “The Father” all rank second with six nominations.

What can we tell from all this? Well, the Oscars seem at least nominally interested in social messages and inclusion and even made some history with the diversity of this year’s muster. But by leading the pack with a black-and-white period movie of all white stars whose denouement is an Oscars ceremony, the Academy proves that it’s still more interested in itself.