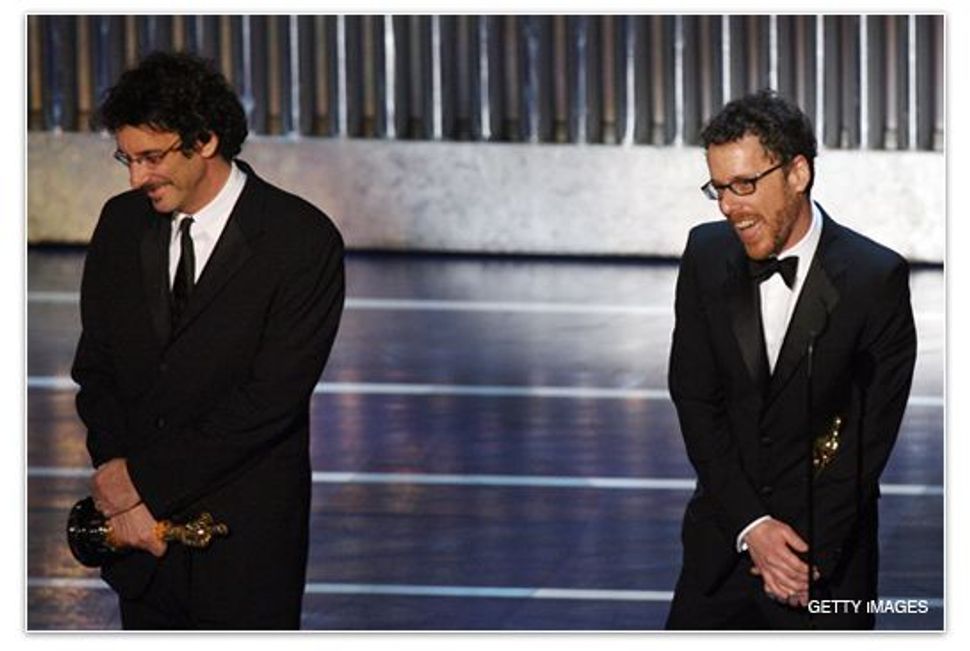 (JTA) — Asked about diversity in Hollywood last week, the Coen brothers defended to the Washington Post their history of making movies about Jews and Minnesotans.

The Oscars So White controversy, #OscarsSoWhite, may reflect a real problem, the film writing-directing-producing duo agreed: Money drives commercial movies, people who invest money want more of what has worked in the past and it’s daunting for minorities to break into that cycle.

But the brothers balked at the notion that film creators bear personal responsibility for promoting diversity, arguing that you write what you know.

“Take any particular actor or writer or filmmaker, and you go, ‘Your movies should be more this or more that or more the other thing.’ The only sane response is that you can only write what you can write. You can’t sit down and say, ‘I’m going to write something that follows the dictates of what the culture thinks should be happening, in terms of cultural diversity in storytelling.’ To be honest with you, that’s completely lunatic,” said Joel Cohen.

“We actually write movies in which the characters are Jews or Minnesotans,” said Ethan Cohen.

Even sticking to what they know has gotten them into trouble.

“You say, ‘Look at the work.’ And then they go, ‘Well, this character is Jewish and is a bad guy.’ Somehow in their minds, that’s implying that in our minds the Jewish characters stand in for all Jews. Like I say, you can only write what you can write. If the question is whether or not there should be more people involved in the process, with more diverse backgrounds, so that what they write reflects a greater amount of diversity — that the business itself should be more open to people of different backgrounds, so that those stories come in — that’s a legitimate thing to talk about. The other thing is crazy,” said Joel Cohen.

“Hail, Caesar!” focuses on another community the Coen brothers have come to know — the Hollywood film industry. The film focuses on the making of a film, also called “Hail, Caesar!” starring Kirk Douglas-like actor Baird Whitlock (George Clooney). Unsurprisingly, there are some Jews on set.

In an exquisite Jew-out-of-water scene, studio executive Eddie Mannix (Josh Brolin) convenes a group of clergy to review the “Hail, Caesar!” script and make sure it doesn’t offend any religious sensibilities. There’s a Roman Catholic priest, a Protestant minister, a Greek Orthodox priest — and a rabbi.

The rabbi struggles at length to politely explain that however Jesus is portrayed in the film, Jews won’t be offended, because to Jews the Christian messiah is simply the “Nazarene.” The acutely funny five minutes encapsulate what it is to be a Jew in the Diaspora.