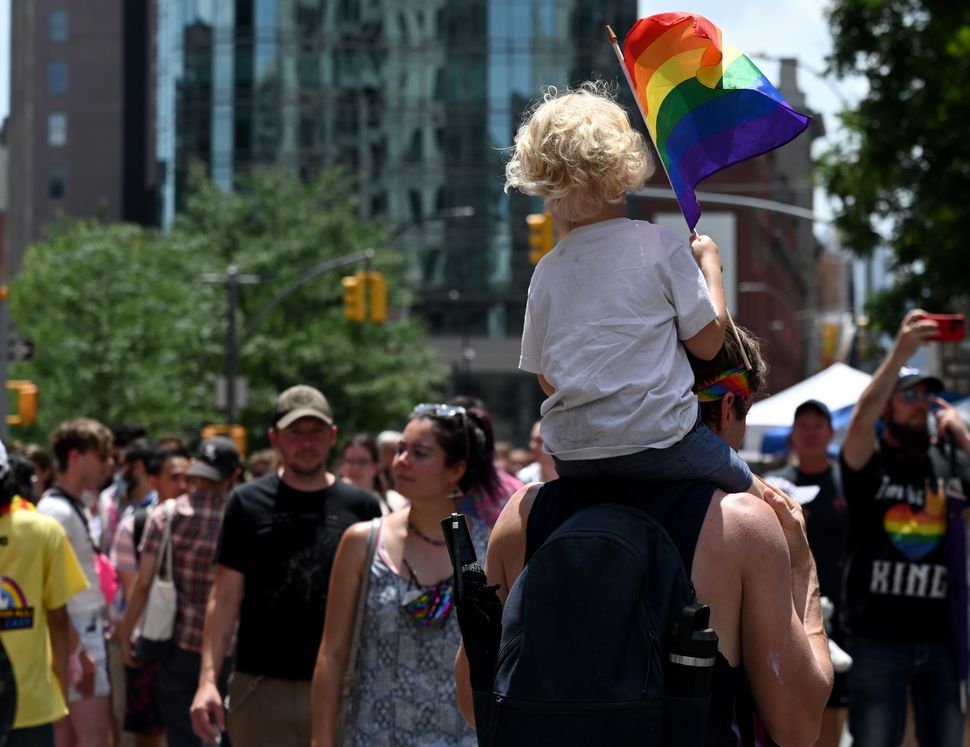 A child siting on a parent’s shoulders waves a pride flag at the 2021 NYC Pride Fest near Union Square on June 27, 2021 in New York City. By Alexi Rosenfeld/Getty Images

Her point: Generations of LGBTQ Jews who have faced exclusion from their families and communities have wondered who would perform mourning rites for them after their deaths, like saying Kaddish, or the memorial prayers included in the Yizkor service. Pride, a ritual of communal celebration and remembrance, functions in part as an answer to that question. The LGBTQ Jewish community keeps the memories of its own alive.

But it’s not just that. Pride is rooted, said Rabbi Sandra Lawson, in remembrance of the battle for LGBTQ rights, and the acknowledgment that it is ongoing. “When I think of Pride, I think of the sacrifices of trans people, brown people,” Lawson said. In the Jewish community, she said, treating Pride as a memorial rite must also mean committing to staying at “the edge of the fight” — remembering what past generations sacrificed for, and pledging to continue their work.

In our archives, Chana’s research led her to some remarkable stories, like that of Helen Hull Jacobs, the openly queer 1930s tennis champion who dared to wear men’s short pants on the court instead of a skirt. But more often it led her to silences, a notable dearth of stories about queer Jewish lives. Closed doors in families, synagogues and neighborhoods have also been closed doors in the institutions, like the Forward, that record our communal history.

There’s no perfect way to address this kind of systemic exclusion. But on the last day of this year’s historic Pride, at a time when, after more than a year of distancing and seclusion, we can once more take to the streets, we’re choosing to hold our own version of Yizkor, honoring a few of those LGTBQ Jews who have passed on in recent years, and reflecting on the work their legacies ask us to continue.

Many of those we’ve lost have names readers will recognize from our reporting. Among them: Edie Windsor, lead plaintiff in the 2013 Supreme Court case that overturned a major section of the Defense of Marriage Act; Debbie Friedman, songwriter whose music became a crucial part of communal life in synagogues nationwide; Maurice Sendak, author of “Where the Wild Things Are”; Larry Kramer, playwright and activist; Connie Kurtz, who with her partner Ruthie Berman played a major role in securing domestic partner benefits for employees of New York City’s government; Adrienne Rich, poet; Oliver Sacks, writer and neurologist; Arthur Laurents, theatrical jack-of-all-trades; Leslie Feinberg, author of the seminal work “Stone Butch Blues”; and Lesley Gore, singer of the classic “You Don’t Own Me.”

But there are countless more like those profiled below: People who were tremendously influential, but who our pages gave short shrift. Their lives, and work, deserved our attention long before now. 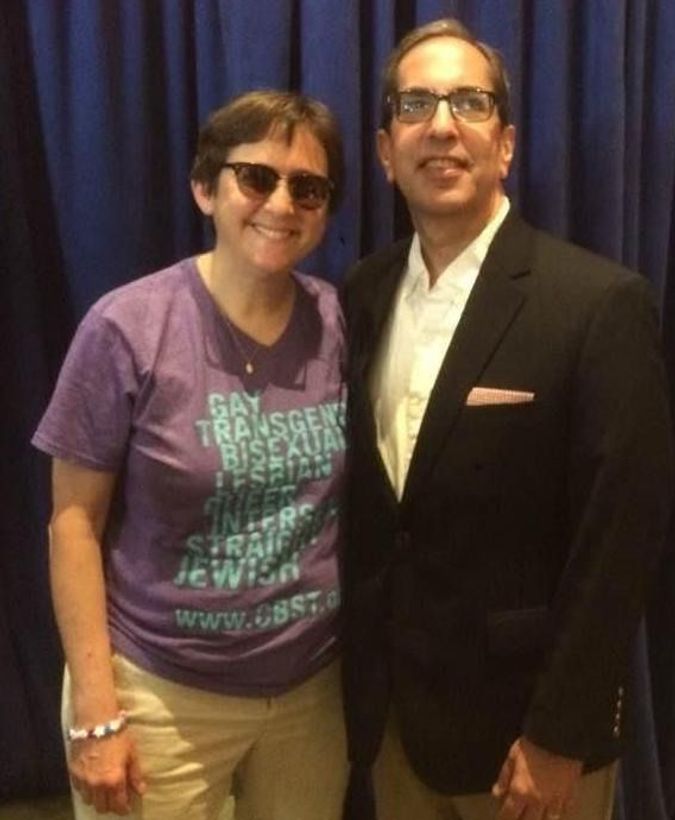 The first openly gay judge to be appointed to New York’s highest court, the Court of Appeals, Feinman was a longtime CBST member. “He’s somebody who exemplifies the best of the LGBT Jewish community,” Kleinbaum said. “His loss this year is one that we carry with great heaviness — an enormous loss to the world, our community, New York.”

Feinman’s appointment to the Court of Appeals was evidence of a rapid turnaround in state policy toward the LGBTQ community. In 2006, that same court had ruled that the state’s Constitution did not include precedent for a legal right for same-sex couples to marry. In 2017, Feinman was confirmed to that same court — having married his own husband, Robert Ostergaard, in 2013, after a 2011 state law finally enshrined their right to wed.

His ascent was all the more striking given how thoroughly he had brought his identity into his work. He had served as president of the International Association of L.G.B.T.Q. Judges and had been a member of the Richard C. Failla L.G.B.T.Q. Commission, which advocates for LGBTQ people entering the court system. He wasn’t just the first openly gay judge on the Court of Appeals; he was a judge who had spent his career serving as a profoundly thoughtful and compassionate champion for LGBTQ people across New York, and the world.

At his funeral, Kleinbaum said, every one of his colleagues who spoke “talked about his kindness, his thoughtfulness, his dedication.”

“This,” she said, “is an extraordinary human being.”

Chasnoff, a documentarian who was the first Oscar winner to thank a same-sex partner in accepting the award, died in in November, 2017, at age 60. 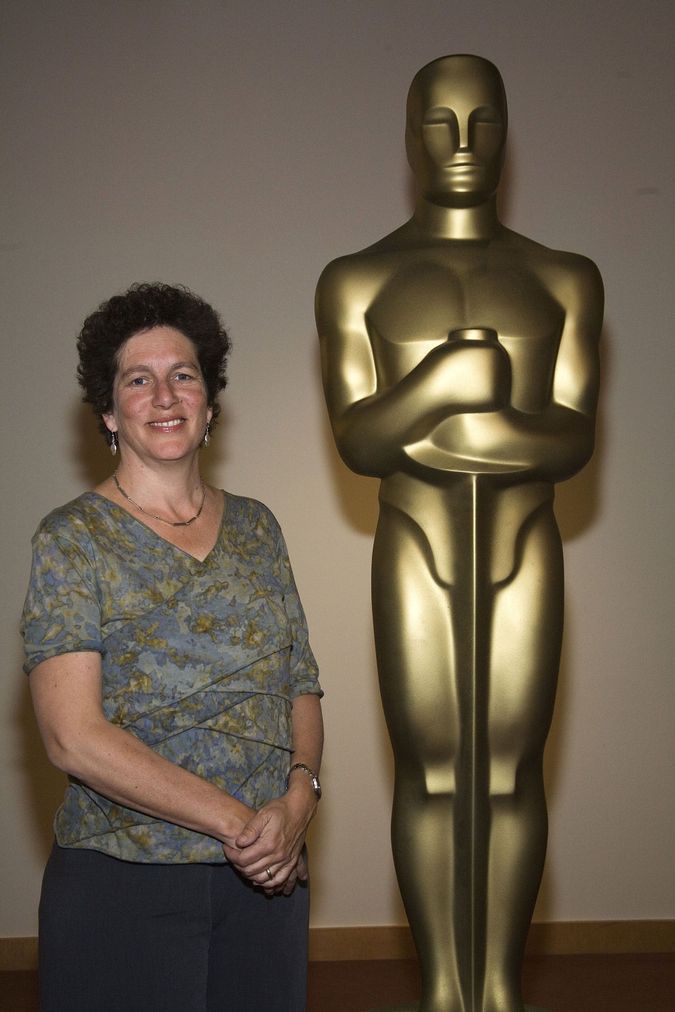 In an interview, Rabbi Ellen Lippmann, founder of Brooklyn’s Kolot Chayeinu, said that Jewish communities have a responsibility to keep their eyes on “the left out, the forgotten, the people on the fringes” — a thesis that could be said to have been shared by Chasnoff, whose friends knew her as Chas. A founding advisory member of Jewish Voice For Peace, from her first film, “Choosing Children” (1984) — which followed six families led by same-sex partners — to one of her best-known — “It’s Elementary: Talking About Gay Issues in School” (1996) — Chasnoff’s work focused on the stories of those whom much of society had long excluded.

That work continued through the end of her life, as she chronicled her battle with breast cancer, leaving behind over 200 hours of film. The resulting documentary, “Prognosis: Notes on Living,” which was completed by her friends and family, premiered this year. It makes for a quiet form of advocacy: Not an argument for change, or an exposure of malpractice, but rather a chronicle of the humanity of a single person fighting a deeply personal battle — the kind it’s nicer not to think about, but that millions fight each year.

Chasnoff’s work could bring her pain. In a 1999 op-ed for IndieWire, she wrote about the flood of abuse she received after the release of “It’s Elementary,” and her struggle to protect her family from it. “We are a family of good values,” one critic sneered. “‘And what are we?’ I wonder to myself,” Chasnoff wrote.

Her commitment to the stories of the left out had costs, but if she ever doubted it was worth it, she never gave the public a hint.

Dobkin, who passed away this May at age 80, was a groundbreaking musician, the founder of the band Lavender Jane, whose first album, “Lavender Jane Loves Women” (1973) was, The New York Times wrote in an obituary, “arguably the first lesbian album.”

The child of a communist couple in Brooklyn, Dobkin was in some ways born into activism: The FBI began tracking her when she was only 16 years old, the age at which she joined the Communist Party. But the radicalism that made her such a force came later, after her divorce from her husband, Sam Hood. In the early ’70s, she met and fell in love with Liza Cowan, her lifelong partner, and decided to make music exclusively for women. She did just that, opening doors for other lesbian musicians like Melissa Etheridge, who admired not only her achievements but also her attitude.

“She made an impact,” Etheridge told The Times, “and she did it with humor.”

One example: At a 1997 music festival, Dobkin told the crowd “being a Jew and being a lesbian are very similar. That’s why I look so much alike. I have so much in common. It’s OK to be a Jew, it’s OK to be a lesbian — as long as you don’t mention it.”

While Dobkin became a less public figure in recent decades, she re-entered the mainstream consciousness with a bang in 2015, when a 1975 photo of her by Cowan, in which she wears a shirt proclaiming “The Future is Female,” went viral after being resurfaced by an Instagram account. That re-entry was far from uncomplicated. After Dobkin penned a 2015 essay, “The Erasure of Lesbians,” that was highly critical of and arguably offensive toward transgender people — “transsexuals have leaped forward on the civil rights agenda and become the latest cause of the LGBTQ community, often to the detriment of Lesbians,” she wrote — she came to be seen by some as representative of a past era of feminist and LGBTQ advocacy, a time best left behind.

Even so, her impact on the Jewish and LGBTQ worlds remained undeniable. “I knew my coming out would be important and significant,” Dobkin told a reporter for VoiceNews in 2010. “It was a message. It was going to let lesbians all over the world know they are not alone.”

Baum, best known as a philanthropist, passed away this March at age 90.

We’re very sorry to share news of the death of longtime @GLBTHistory supporter Alvin (“Al”) Baum. Born in 1930, Baum was known for his profound connection to his Jewish faith and his unfailing support of the Bay Area’s LGBTQ community. Read more: https://t.co/5QwPGjY5P9 pic.twitter.com/kJX1vBsz4Y

A Chicago native, he made his life in San Francisco, where his identity as a gay man was publicly revealed in the mid-1970s by a San Francisco Chronicle article about an LGBTQ-affiliated continuing education institute. Baum, then in his 40s, was put in a perilous position: At the time, it was anything but simple to be openly gay.

He made the choice to treat the exposure as an opportunity, committing himself to serving and advocating for the LGBTQ community for the rest of his life.

In 1975, he became the founding chair of the LGBT Alliance. In the late 1980s, he made a late career pivot to become a psychotherapist, prompted by the enormous psychic toll incurred by the AIDS crisis. At the same time he began that transition, he served as the single openly gay member of the Jewish Family and Children’s Service of San Francisco. In the ’90s, he served as director of Lambda Legal, a major LGBTQ advocacy organization. In 2013, he served as Grand Marshal of the San Francisco Pride Parade.

He often referred to himself as the “Gay Jew in Chief,” and he saw his gay and Jewish identities as entirely intertwined. He became a founding board member of the New Israel Fund with the vision of an Israel in which all people were equal, a mission deeply connected to his advocacy for the equality of LGBTQ people.

“Al lived a full, rich life,” his husband, Robert Holgate, told The Jewish News of Northern California, following his death. “Through his example of giving, he taught many how to live, love and give back.”