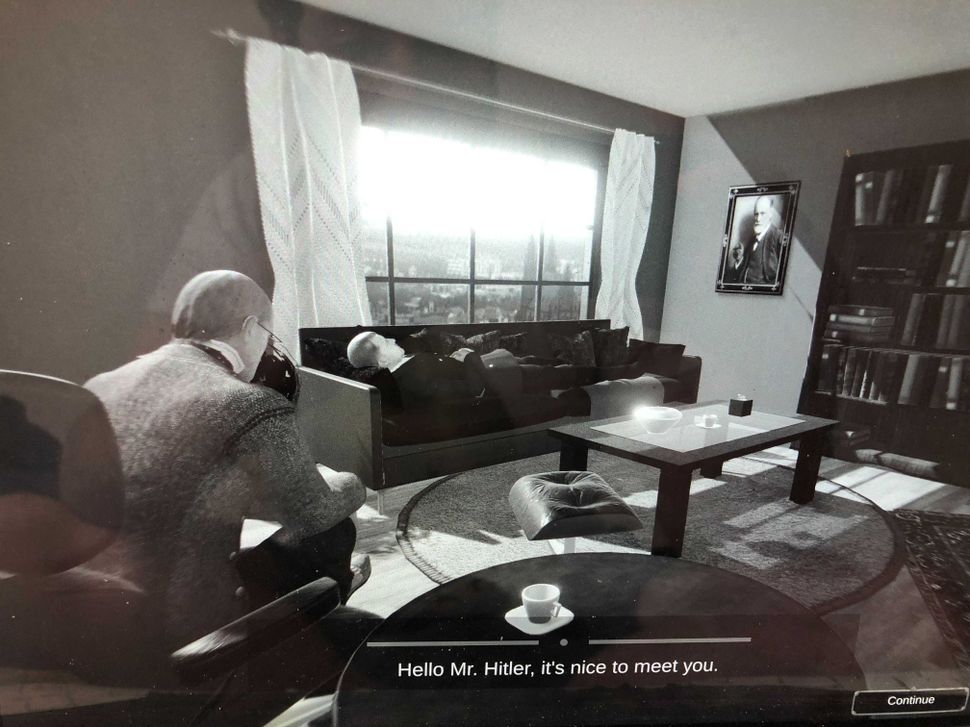 A still from Jon Aegis’ “Heal Hitler.” Photo by Screenshot from 'Heal Hitler'

In a handsomely-furnished psychologist’s office, below a picture window offering a view of a city skyline, a reclined figure, staring down a stately portrait of Freud, speaks about his doting mother and his abusive father. The patient, a man in his mid-30s, is a veteran and amateur artist with a criminal record; he is prone to paranoid tangents and is at times evasive. He’s wearing jackboots and an Iron Cross.

It’s 1925, and the man is Adolf Hitler. In less than a decade he will take control of Germany and begin to implement a genocidal program against, among others, the nation’s Jews.

Unless you can heal him.

So runs the premise of “Heal Hitler,” a video game released on the Steam PC marketplace on July 22. In it, players act as a psychologist probing Hitler’s past traumas in an effort to cure him of his delusions and prevent his rise to chancellor and establishment of the Third Reich. 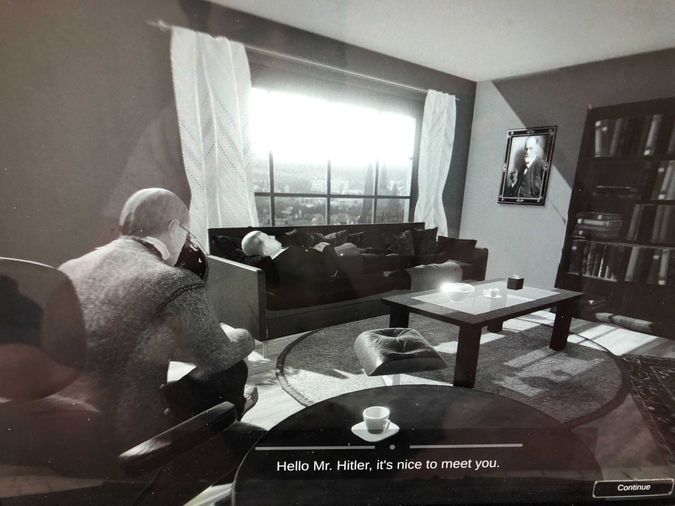 A still from Jon Aegis’ “Heal Hitler.” Photo by Screenshot from 'Heal Hitler'

While the premise seems sensational, it is in fact a historically grounded case study in which little, besides the premise of the Nazi leader seeking help, is invented. And it is, in fact, not a bad entry point for understanding what may have motivated Hitler. Its creator, a 27-year-old Czech game developer who released it under the pseudonym Jon Aegis, says he lost family to Hitler’s wars. He did not come to imagine counseling Hitler as a fan of his work.

Instead, Aegis said that he is simply a game developer with an interest in psychology — particularly the work of Carl Jung. Reading Jung’s work, including his reflections on Hitler’s pathology, he began toying with the idea of a psychology simulator franchise. He thought it would be good to start with an interesting person to analyze, and already knowing something of Hitler’s profile from Jung, the idea fell into place.

“Learning about Hitler was a very hard thing,” Aegis, who declined to provide his real name, wrote over email. In crafting the game, he studied social psychologist Erich Fromm’s analysis of Hitler, Walter Langer’s “The Mind of Adolf Hitler,” a DSM-IV assessment of the dictator and Peter Ross Range’s “1924: The Year that Made Hitler.”

“At this stage I am repulsed by him and I don’t really want to find any more information about him,” Aegis said. “I’ve had enough.”

But despite his clear disgust — and the clearheaded in-game indictment of Hitler’s antisemitism — Aegis was inundated with online abuse when he began marketing the game on Reddit.

“I did anticipate some controversy,” Aegis said. “But what happened on Reddit I’ve never experienced in my life.”

Aegis received what he estimates are hundreds of personal attacks calling him a Nazi apologist, an antisemite and a “race realist,” a term he hadn’t ever heard before.

Aegis understands that the name he gave his game can seem flip. But he’s frustrated by critics who, he said, “read the name ‘Heal Hitler’ and assumed that I want to heal Hitler to allow him to be more effective in causing suffering.”

Having played the game, I can confirm that is in no way the goal. The game treats Hitler as a human being whose problems can be reduced to the usual unremarkable baggage that comes with having parents, a family tragedy and a dashed creative dream. It does feel taboo to suggest that Hitler might have been cured — that to avoid the horrors of the Final Solution, all that was needed was for him to spend some time on the analyst’s couch. But there’s value in recognizing that Hitler, while capable of monstrosities matched by few in history, was not only a monster.

“Hitler was human,” Aegis said. “And he was a pretty boring and weak human. That’s exactly my point — a guy like this could exist even today and people who are not really used to dealing with their own evil would have no way of detecting that in other people.”

As the unnamed analyst, you can make a limited number of choices for how to lead the session, and you can gauge your success in the form of newspaper headlines. If you are successful in getting Hitler to consider the source of his anger — the reason he came to see you, after his colleagues noted his unhinged delivery in a public speech — the headlines report that he has left the Nazi party, scrapped the publication of “Mein Kampf” or, if you win the game, exited politics.

The draw of attempting to diagnose one of the world’s foremost tyrants is by no means a novel one. What is new here is the presentation. There is an understandable reflexive discomfort that comes with gamifying the topic, although “Heal Hitler” is far from the first game to broach that possibility. Given the stakes — the deaths of millions are on the line — a simple “game over” notice or headline informing you Hitler formed the SS can be skin crawling.

Subtle changes in questions and sequence can change the outcome, which is one of the game’s major failings. It doesn’t always make sense why a certain choice yields a positive or negative result. A question about why Hitler dates very young girls, rather than a query about a Jewish gallery owner who doesn’t like his work, can mean the difference between the publication or shelving of “Mein Kampf.” I asked Aegis what tactics might change the ending, and he responded that in the end, there aren’t many options given to the player, and the method simply follows what therapy looked like at the time, complete with a Freudian view of Hitler’s relationship to his parents. Hitler’s worldview and sense of himself as Germany’s savior and other tenets from his manifesto are also explained in his own words in the game.

I think the discomfort with the game comes down to a change of history that treads a bit too close to denial, in a way that violent video games where players kill Hitler in a hail of bullets or thought experiments about ending his life as an infant don’t. The act of psychoanalysis has the inbuilt precondition of viewing another person as just that — a person, and one who can change for the better. For someone like Hitler, steeped not just in psychological damage, but a centuries’ old backdrop of bigotry, an hour a week would likely never be enough. So receiving him on human terms will perhaps always be controversial.

“People think that I am trying to humanize Hitler and make them empathize with him,” Aegis said. That’s not quite right, he argues, but says that understanding Hitler’s darkness is imperative to understanding how tyrants take power — by appealing to our darkness as well. “A lot of people were fooled by Hitler. And I think that is still possible today.”