Isaac Bashevis Singer and His ‘Harem’ 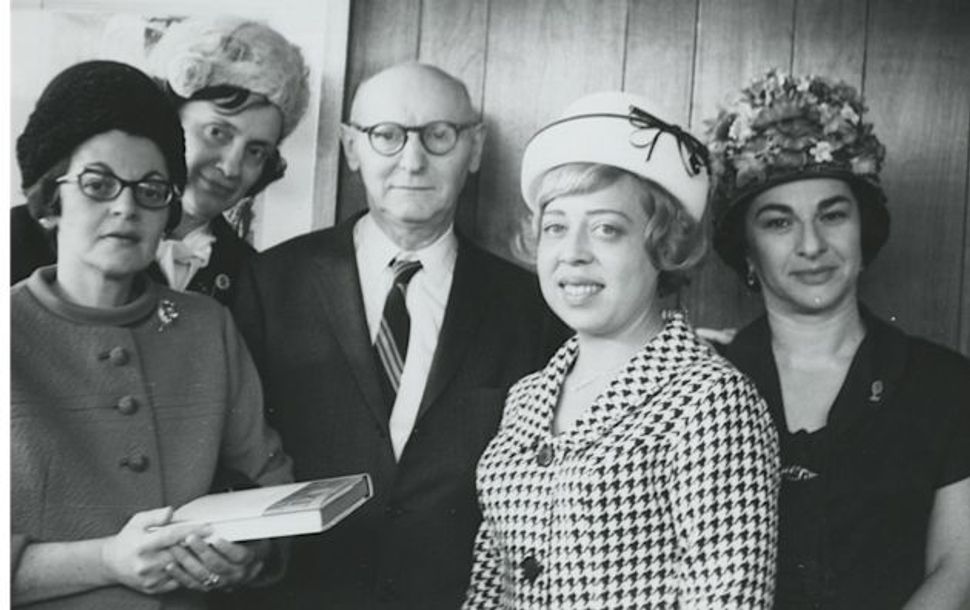 Singer With His Translators: In translating his work into English, Singer worked closely with a group of female collaborators to produce what he called ‘second originals.’ Image by Courtesy NYJFF

In Yiddish theater lore it’s told that when the great actor and heartthrob Boris Thomashefsky mounted a production of “Hamlet” on Second Avenue, the sign outside read, “Shakespeare’s Hamlet: Translated and Improved.”

These questions all apply in the case of Isaac Bashevis Singer, but with an added twist. Unlike most authors, Singer didn’t let his translators just do as they pleased. Rather, he worked closely with a group of female collaborators to produce what he called “second originals.” There’s a strong case to be made that Singer’s English translations were just as authentic as their Yiddish sources.

But who were these translators? Even fans of Singer have probably not heard of them. Who is Eva Fridman, Evelyn Torton Beck, Dvorah Telushkin, Dorothea Strauss or Duba Leibell? Where did these women come from and what became of them?

Now a new documentary, “The Muses of Isaac Bashevis Singer,” directed by Israeli filmmakers Asaf Galay and Shaul Betser, allows us to hear from these women themselves. The film, which opens this year’s New York Jewish Film Festival, provides recognition for a group of translators that has been unjustly, if predictably, overlooked.

In most ways, “The Muses of Isaac Bashevis Singer” is similar to other documentaries about deceased cultural figures. It mixes vintage footage and photos — some cannibalized from Amram Nowak’s 1986 film “Isaac in America” — with an array of talking heads; it offers snapshots of public events, like Singer’s 1978 Nobel Prize win; it even roots out the complexities of Singer’s romantic life and connects them with his work.

But “The Muses of Isaac Bashevis Singer” differs from the usual hagiography-with-caveats convention that defines the genre. Although many of the experts weighing in on Singer are specialists — biographers Florence Noiville and Janet Hadda are both featured — many of the interviewees are not mere commentators, but subjects of the film themselves.

Indeed, the documentary is less a biographical sketch of Singer than an investigation of his translation process, and of his crossover success in American literature. “On the one hand he wants to stick to Yiddish, and on the other hand he has to have a final translation of his works in perfect English,” Noiville explains. So “he creates what he calls a ‘harem’ of translators.”

Singer didn’t start out working that way. His first exposure to an English-reading audience came through Saul Bellow, who in 1953 translated his story “Gimpel the Fool” for the magazine Partisan Review. In his autobiography, “A Margin of Hope,” Irving Howe recalled how he sat Bellow down in front of a typewriter in Eliezer Greenberg’s apartment on 19th Street and watched “in a state of high enchantment” as Bellow translated the work in just a few hours.

While Bellow helped Singer get off the ground, Singer was afraid that the more famous writer would get too much of the credit. So he set about recruiting his own translators, nearly all of them young and inexperienced. Many of them describe meeting him at a party or literary event, and being propositioned to become his translator on the spot.

Although they collaborated closely with Singer, calling these women “translators” is a bit generous. In fact, few could read Yiddish themselves; instead, Singer would visit them in their apartments on the weekend and would read aloud to them from the Yiddish text, translating it into English as he went. (Singer had his own experience as a translator, having produced Yiddish versions of Knut Hamsun’s work, among others, a fact overlooked by the film.) The “translator” would then type it up and, with Singer’s approval, make corrections and improvements as she went.

In the documentary we see footage from one such session, in the sun-lit Manhattan apartment of Dvorah Telushkin. Singer sits in a rocking chair by the window, reading from a newspaper, while Telushkin sits to the side at a small desk, producing the English story on her typewriter. In the short clip, we hear them go back and forth, transforming the phrase “Now listen to something” to “Now hear a story” to Telushkin’s final suggestion, “Now listen to this.”

Such arrangements naturally gave rise to rumors, especially considering the sexual content of Singer’s work and his own reputation as a ladies’ man. And some of the translators in the movie admit that Singer propositioned them sexually or engaged in sexually explicit conversation. Yet all of them deny that they had a sexual relationship with the writer. As Hadda says of her own biographical research, each one of them told her, “He slept with all of his translators except me.”

The exception was Doba Gerber, a woman who served not as a translator, but as Singer’s Yiddish secretary. In footage taken from a 1996 interview conducted by the University of Southern California Shoah Foundation Institute, she recalls how she met Singer for coffee and pie after devouring all of his books and, for the next 30 years, essentially became his mistress. She even inspired some of his stories, and at least one of his books was dedicated to her.

Singer also had a wife, Alma, plus a son, in Israel — the recently deceased Israel Zamir, whom he had fathered out of wedlock, and who served as one of his Hebrew translators. In the movie, we hear from Zamir’s daughter, Meirav Chen-Zamir, who says that her father translated Singer not because he wanted to be a translator, but because he “wanted a father.”

Singer’s Hebrew translations raise another issue, beyond family history. In the English versions of his work, Singer made substantial changes to the Yiddish, with the aim of attracting a non-Jewish audience. He also demanded that all future translations of his writing be done from the English rather than the Yiddish. His French translator, Marie-Pierre Bay, goes so far as to say that Singer discouraged her from learning Yiddish at all.

Not everyone, however, obeyed Singer’s instructions. Another Hebrew translator, Bilha Rubinstein, claims that Singer distorted his texts so as “not to upset the non-Jewish reader.” In a typical example, he changed the offensive word “shiksa” to the innocuous “village girl.” Such changes may have made his stories more appealing to The New Yorker, but they also “undermine[d] the character of the text.” Therefore, Bilha says, in translating Singer’s work into Hebrew, she refuses to work from anything but the Yiddish.

In addition to the literal translation of Singer’s writing, “The Muses of Isaac Bashevis Singer” deals with the larger acceptance of Singer’s work in American culture. We hear from Leah Napolin, the writer who adapted “Yentl the Yeshiva Boy” into the Broadway play that was subsequently turned into the movie “Yentl” by Barbra Streisand. And of course we see Singer accepting the Nobel Prize in literature, an event that cemented his status as the most famous Yiddish writer of the 20th century, and perhaps of all time.

But it was his English translations — and by extension, translators — that made this all possible. As Hadda puts it: “Even though he was read in Yiddish… there’s no question that his fame and his Nobel Prize… comes from his work in English. Had he not had good translators, he wouldn’t have reached the English-reading public, and without that certainly the Swedish Academy wouldn’t have known of him.”

It’s too bad, therefore, that so little is known about these translators. And although the film does an important job highlighting their role, we still find out little about their lives or accomplishments, beyond their involvement with their famous boss. But perhaps it is the fate of translators to be always in the shadows — no matter how many improvements they make.

Isaac Bashevis Singer and His ‘Harem’