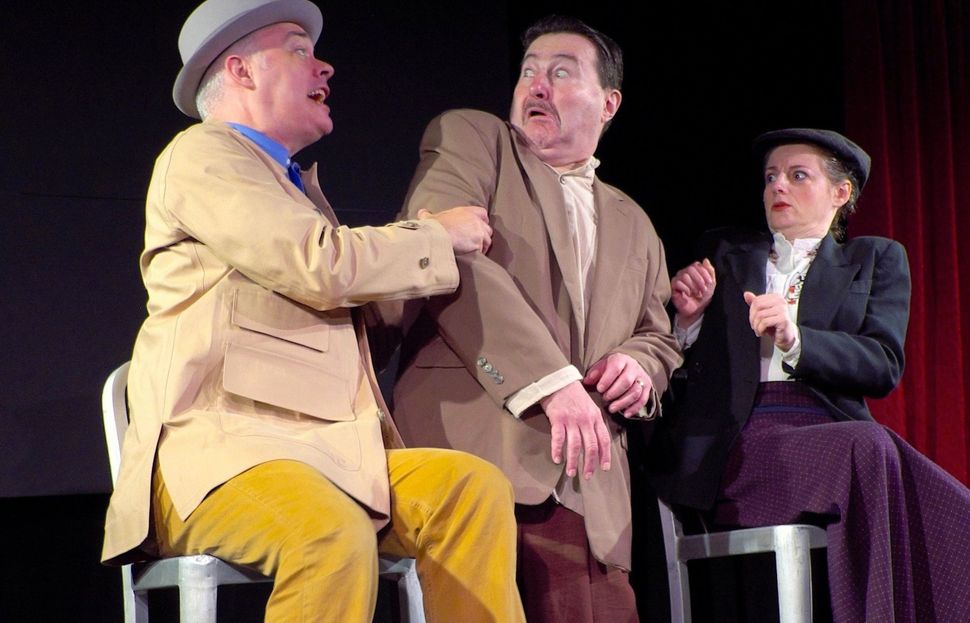 Sholem Aleichem has been an unusually frequent topic of conversation in New York this summer, thanks to the critical and commercial success of the National Yiddish Theatre Folksbiene’s Yiddish-language production of “Fiddler on the Roof.”

As anyone who has read Sholem Aleichem’s Tevye stories is well aware, the works of the “Jewish Mark Twain” differ dramatically from the Broadway musical they inspired. Most people who see “Fiddler on the Roof” have never read “Tevye’s Daughters,” however, and that’s a real shame. Although “Fiddler on the Roof” is a beloved American musical, as literature it is a mere shadow of its inspiration. The Americanized Tevye who sings “If I Were a Rich Man” does little justice to the towering figure of Yiddish literature who created him.

Fortunately, New Yorkers who wish to learn more about Sholem Aleichem can now gain a better appreciation for the great Yiddish writer by seeing the bilingual production “Tevye Served Raw”. The show, featuring Yiddish and English performances of some of Sholem Aleichem’s best works — as well as scenes from the life of the real Sholem Rabinovitch, whose literary persona “Sholem Aleichem” was as much a fictional character as Tevye or Menachem Mendl — runs at the Playroom Theater through August 14. The theatrical potpourri is the brainchild of actor, director and playwright Allen Lewis Rickman and actor and comedian Shane Baker. Rickman and Baker are joined on stage by Rickman’s wife and frequent acting partner, Yelena Shmulenson.

Rickman and Shmulenson are best known in Yiddish for their turn as the pickaxe wielding shtetl-couple Velvel and Dora in the Coen Brothers film “A Serious Man.” In English they have appeared in popular TV shows such as “Boardwalk Empire,” “Orange is the New Black” and “The Marvelous Mrs. Maisel.” Baker, besides his work as the director of the Congress for Jewish Culture, under the aegis of which “Tevye Served Raw” is being produced, is known as an actor on the Yiddish stage, one of the best contemporary recitors of Yiddish poetry and the Yiddish translator of Samuel Becket’s “Waiting for Godot.”

“Tevye Served Raw” grew out of material that Rickman and Baker have been translating, adapting and performing for several years as part of an annual gathering to commemorate Sholem Aleichem’s yahrzeit at the Brotherhood Synagogue.

While best remembered today as a comic writer, Sholem Aleichem’s work featured a great deal of tragedy, something that “Tevye Served Raw” does not shy away from. The production, brilliantly directed by Rickman — who continually finds novel ways to present bilingual theater — includes a near-even mix of hilarious moments and tear-jerkers.

In the first scene, an adaptation of Sholem Aleichem’s railroad story “S’a Lign!” (“It’s a Lie!”), Rickman positions himself between Baker and Shmulenson and serves as their interpreter. But he doesn’t merely translate for the two characters; Rickman parrots the voices and facial expressions of his fellow actors as if performing a mirroring act from a vaudeville routine. Imitating Baker’s character, who gossips ceaselessly about a rich man in his hometown while promising his fellow passenger (Shmulenson) that he isn’t slandering the man because every rumor he repeats “is a lie!”, Rickman soon becomes red in the face from shouting and pantomiming his annoyance with the repetitive dialogue. (The hilarious moment is one of several instances in which the production cleverly breaks the fourth wall.)

Bilingual theatrical productions can be tedious for audience members who understand both languages, but in this case the English adds brilliantly to the Yiddish, because Rickman and Baker’s translation captures the many-layered richness of Sholem Aleichem’s original. Some idioms are rendered using old-fashioned American expressions that recall Hollywood gangster films of the 1930s. The incompetent traveling salesman Menachem Mendl (played by Baker in Yiddish and rendered into English by Rickman), sometimes sounds like James Cagney, which, strangely enough, works wonderfully. In other moments, especially as Mendl and his wife Sheyne Sheyndl(Shmulenson) exchange increasingly frantic missives as the former’s ill-conceived business schemes inevitably implode, the dialogue transitions into a pompous pseudo-biblical register that perfectly imitates the Hebrew and Aramaic greetings of Sholem Aleichem’s original.

Although the three actors have fantastic comedic chops — Shmulenson’s shouting Yiddish delivery of Sheyndl’s letters is one of the funniest things I’ve ever seen — “Tevye Served Raw” truly excels in its tragic scenes, performed only in Yiddish so as not to interrupt the flow of the dialogue. I noticed more than a few people in the audience wiping away tears as Tevye (Rickman) spoke about his daughter Chava while standing amongst the ruins of his burned-down house. Rickman and Shmulenson, who a mere ten minutes earlier had provoked uproarious laughter, had managed to leave the same audience speechless.

Only a small number of writers possess, like Sholem Aleichem, the necessary breadth to create both hilarious and bitterly tragic moments. Far fewer still can, like the “Jewish Mark Twain,” do both at the same time. Similarly, there are very few performers who can adequately portray such a wide range of human emotion in a single production.

A small miracle, therefore, that Sholem Aleichem’s works have found three actors who can stage them in a way that speaks to a contemporary audience without being, like “Fiddler on the Roof,” nostalgic, corny or overwrought.

Hopefully, New York theatergoers will have many more such opportunities to experience the works of Sholem Aleichem “served raw.”