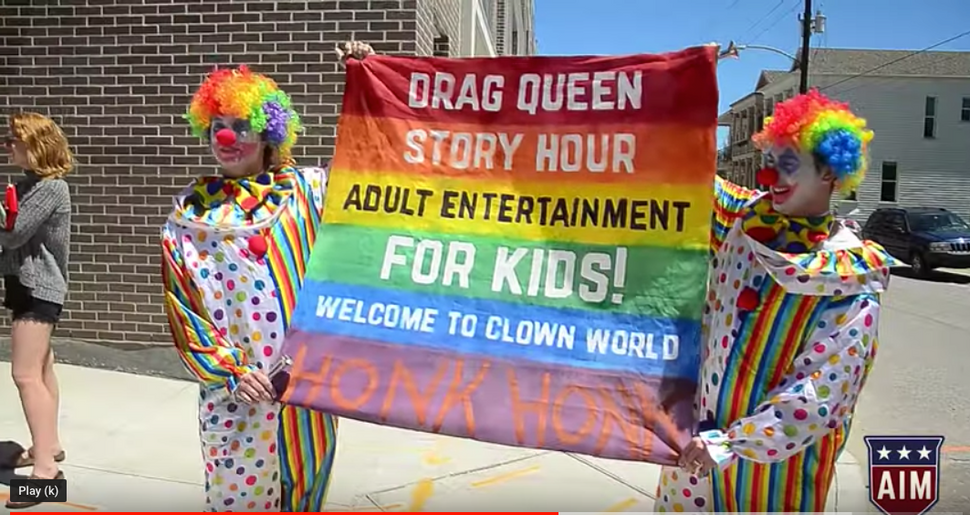 Members of the white nationalist group American Identity Movement hold a protest outside a New Orleans library while dressed as clowns. Image by AIM/YouTube

Last month, my colleague Ari Feldman received a strange email from an anonymous source. That normally wouldn’t be very notable – the Forward gets unsolicited emails all the time, ranging from news tips to complaints to apocalyptic prophecies – except for the unexpected closing line: “Honk honk, motherfucker!”

Another gracious email from a lovely @jdforward reader.

(Reposted bc I accidentally tweeted the unredacted picture, I guess I really a clown.) pic.twitter.com/sft6Cnjh4f

At first, we thought it was just a creative coulrological insult – more original than the “kapos” we normally get over the transom. But as it turns out, there may be a more sinister motive: White nationalists are trying to appropriate clowns for their own ends.

As Right Wing Watch reported on April 4, users of the online message board 4chan, which is popular among white nationalists, have been trying to popularize a character called “Honkler” – an image of Pepe the Frog, the cartoon mascot of the so-called “alt-right,” wearing a clown nose and colorful wig. Other online anti-Semites have built upon the Honkler imagery when citing news that confirms their nihilistic worldview. When describing what they see as the illogic of a liberal, non-racist society, they write that they are living in a “clown world,” or just write “honk honk” as a shorthand to get that point across.

Prominent far-right online platforms, including the neo-Nazi website The Daily Stormer and the increasingly-popular white nationalist podcast “Goy Talk,” have used these memes in their posts. And many anonymous troll accounts have changed their profile pictures to photos of clowns or their pseudonyms to things like “Honkler Honklersen.”

For example, in response to an article about the Florida state legislature passing a law strengthening bans on anti-Semitism in public schools, a user with the avatar of an anime cartoon with a rainbow wig and red nose wrote, “Meanwhile they will let them [Jews] continue to lie to make slavery and the treatment of native americans seem worse to incite hatred against whites. honk honk.”

While some users depict themselves as clowns who are “in” on the “joke” of the alleged downfall of white society in a multiracial country, others have targeted their supposed enemies by depicting them as clowns. Goy Talk tweeted an image last month of a stereotypical scheming Jew in clown garb; one of the current top posts on R/The_Donald, the popular pro-Trump Reddit page that is the frequent source of racist and anti-Semitic invective, features an image that appears to be the Prophet Muhammad in a clown wig.

While much of this behavior is confined to the internet, some has extended itself to the physical world as well. On April 22, two members of the American Identity Movement – the white nationalist group formerly known as Identity Evropa – dressed as clowns and entered a New Orleans public library to disrupt a children’s story time program being led by local drag queens. “Welcome to clown world, honk honk,” their sign said.

Later that month, members of the same group stormed a Washington bookstore to protest a lecture about whiteness, chanting “this land is our land.”