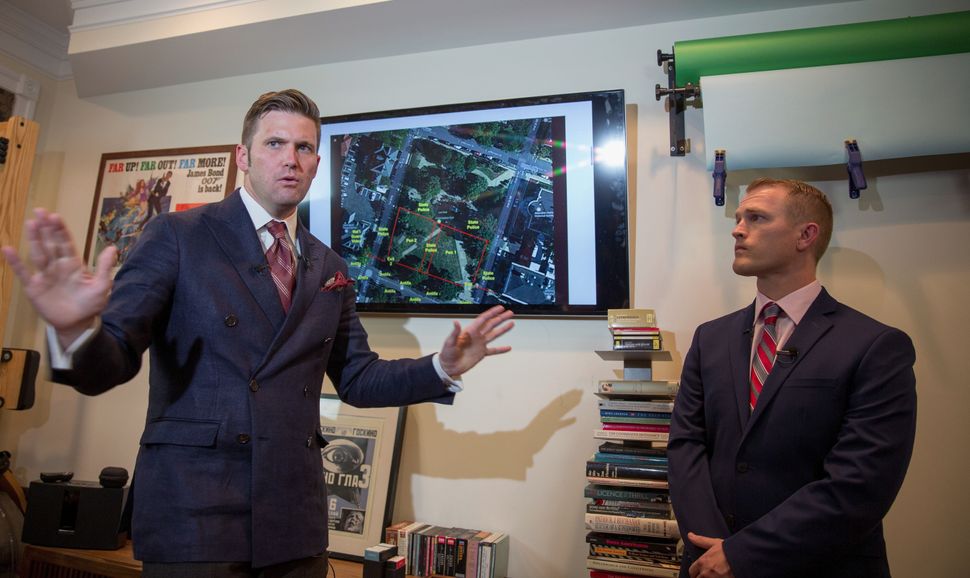 Left-wing research organization Media Matters recently released hundreds of thousands of messages from a chat forum for members of the white supremacist group Identity Evropa, which revealed immense admiration for Fox News’ Tucker Carlson, who is currently under fire for making racist and misogynist comments on the radio over the years.

In the messages, members referred to Tucker as “our guy” and “a lone voice of reason in the media.” Identity Evropa has made it clear it supports with him and his views — but what exactly is this group about?

It is part of the “alt-right” movement.

Identity Evropa recruits white, college-aged men to promote its white supremacist ideology. Members claim not to be racist, as they don’t outright attack people of color; instead, they view themselves as “identitarians,” focusing on preserving and promoting Western culture.

It was founded in 2016 by Iraq war veteran Nathan Damigo. Its logo is a teal triangle with three lines that join in the middle, which represents the choice between good and evil. It has gained prominence by posting flyers, banners and stickers around college campuses with images of European statues and phrases such as, “Our Future Belongs to Us” and “Keep Your Diversity We Want Identity.” It encourages activism on campus. Its slogan is, “You will not replace us.”

Its members helped plan the Unite the Right Rally in Charlottesville.

Damigo was among those responsible for the violent rally, which killed a counter-protestor. White supremacists marched through the streets with torches, chanting “You will not replace us!” in reference to a fear of “white genocide.” At one point, they switched it up to “Jews will not replace us!” They also shouted, “First stop Charlottesville, next stop Auschwitz!” and “Get in the showers!” as they raised their arms in the Nazi salute. Lately Identity Evropa has been trying to distance itself from events such as this with leadership changes, a strengthened ideology and more rules on membership and public appearances.

Alyssa Fisher is a writer at the Forward. Email her at [email protected]