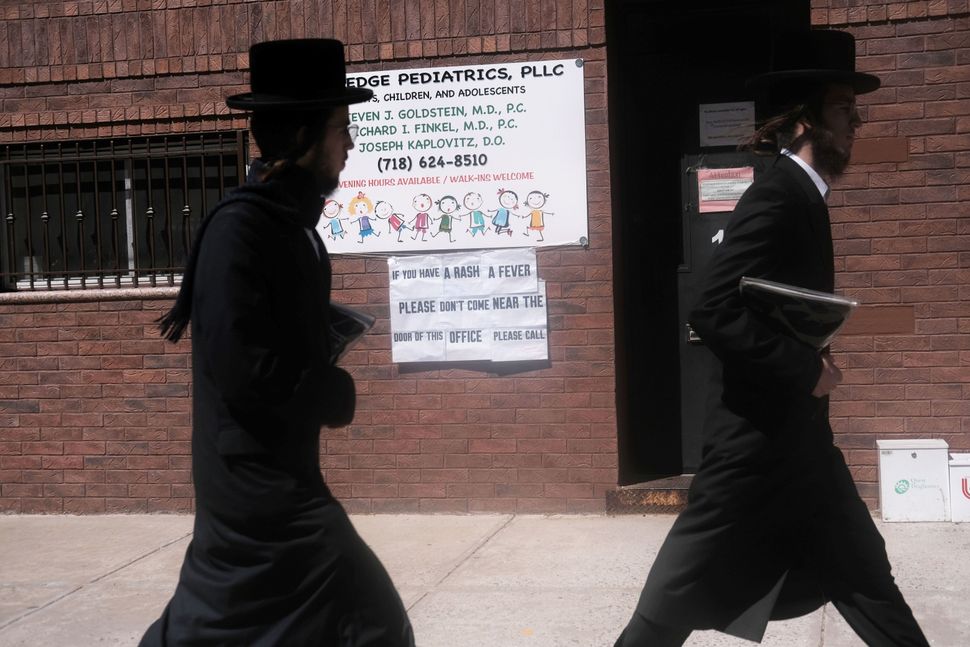 Ultra-Orthodox Jews in Brooklyn, outside a pediatrician office. Image by Getty

New York City health officials say there may be hope on the horizon for the ongoing measles outbreak in Brooklyn, the Daily News reported.

The outbreak is stilly “highly localized,” according to Dr. Oxiris Barbot, the city health commissioner, who said Tuesday that 80% of the infections are occurring in four zip codes that have large concentrations of ultra-Orthodox Jewish residents.

The city has seen 466 measles cases this year, with 43 reported last week. But health officials say that that number represented a downward turn in the infection rate, suggesting that the city’s efforts to combat the disease are working. In April, Mayor Bill de Blasio declared a state of emergency for measles in the city, making vaccination mandatory in areas where the infections were most common. Rockland County, a suburban county north of New York City, had declared a state of emergency for its own measles outbreak in March.

Getting individuals and some ultra-Orthodox institutions to comply with the city’s measures to combat the disease hasn’t been easy. The city issued summonses to 12 people it said had defied mandatory vaccine orders. Multiple yeshivas in Williamsburg were found to have allowed unvaccinated children to attend classes. Some anti-vaccine sentiment in the ultra-Orthodox community has been driven by propaganda that opposes science on vaccines and governmental health institutions designed to appeal to the ultra-Orthodox community.

The outbreak may be getting better partially because two major Jewish holidays — Purim and Passover, which both revolve around large social gatherings — have come and gone in the last two months. Experts expected infection rates to spike around that time.