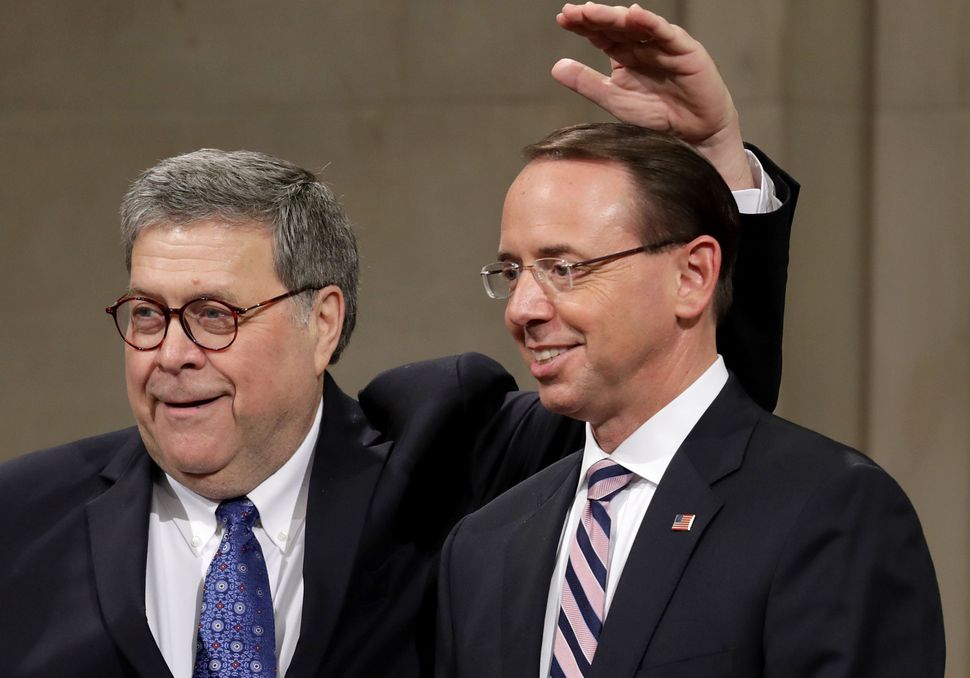 Attorney General Bill Barr (left) with Rod Rosenstein at a farewell event for Rosenstein held on May 9 in Washington, D.C. Image by Getty

In one of his most candid public appearances, former deputy attorney general Rod Rosenstein defended his role in the firing of former FBI Director James Comey, and referred to Comey as a “partisan pundit,” the Washington Post reported.

Rosenstein recently stepped down as number two official in the Justice Department. In prepared remarks made to the Greater Baltimore Committee, he responded to criticism that he acted inappropriately in supporting the firing of Comey. In May 2017, Rosenstein wrote a memo supporting Comey’s firing at Trump’s request, a move that some criticized as unnecessary.

Rosenstein noted that “the unusual circumstances of the firing and the ensuing developments would give reasonable people cause to speculate about the credibility of the investigation [into Russian interference in the 2016 election].” He did not mention other notable moments from his time as the deputy AG, such as when it was reported that he had discussed removing Trump from office.

But, he said, no White House official told him “that the removal was intended to influence the course of my Russia investigation.” Rosenstein added that if he had made the decision to fire Comey — based on his handling of the FBI’s investigation into Hillary Clinton’s private email server — “the removal would have been handled very differently, with far more respect and far less drama,” he said.

Rosenstein also lambasted Comey for his transition to memoirist and op-ed writer.

“But now the former director is a partisan pundit, selling books and earning speaking fees while speculating about the strength of my character and the fate of my immortal soul,” Rosenstein said. “That is disappointing. Speculating about souls is not a job for police and prosecutors.”